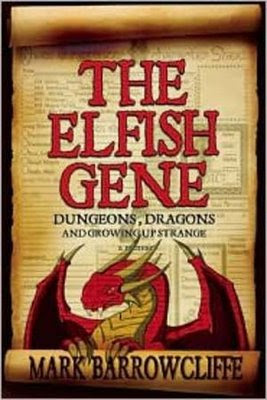 Of course, the young Mark Barrowcliffe would have rolled his eyes at the reference to The Who song above. One of the most charming passages in this book about growing up geeky and awkward in the '70's is his observation that teenagers are incapable of NOT having an opinion. Everything either sucked or was brilliant. Recently, BBC presenter Robin Lustig spoke at our school. He offered his observations on the international reception of Barack Obama, but the students were mainly interested in the BBC guidelines which forbade him from offering his opinion on the news he reported. How could one function, they wondered, without being able to sound off on every thought that crossed one's mind?

It took a while for me to get into The Elfish Gene. The chatty style of British prose was a turn-off when I lived in the UK in the '80's, and it still grates on me. However, it does not take long to get fully immersed in Barrowclife's obsessive world of gaming. His humor is self-depreciating, and he does a great job of capturing the mental world of a young adolescent who is caught between two elusive goals: fitting in and feeling powerful. Only the world of fantasy roleplaying gives young Spaz the sense of self he craved.

Any modern gamer who picks up this book will see some of themselves in the young narrator. The sense of accomplishment that came from achieving imaginary goals, the ability to argue passionately over some interpretation of rules, the feeling of liberation from the cruel world of adolescence by adopting a fantasy persona. Yet Barrowcliffe out-geeks most of the gamers I've ever known. His insecurities get the best of him and he crosses lines that none of my young gamer friends would ever think to cross. He nearly sets a friend's house on fire when trying to create a "real" fireball. He dives into the occult and actually tries to cast actual spells. Several times, I found myself squirming uncomfortably, pitying the poor young Barrowcliffe.

The author's sense of humor keeps us in the game, however, and his reflections about his own young misperception of the world around him come as surprisingly insightful. Barrowcliffe goes a step too far, in my opinion, by repudiating gaming altogether. He suggests that he would have been happier if he had conformed more to the social expectations of his generation. Barrowcliffe's attitude to gaming clearly crossed the line into addictive behavior, so perhaps this distancing was necessary for him, but one wonders if he would have been less obnoxious if he had chosen sports and girls over dice and character sheets. Low self esteem is low self esteem, after all.

Of course, here I am, a forty-one year old man who still plays role-playing games. But the appeal of gaming that Barrowcliffe describes, the power trips and the escapism, is little more than a distant adolescent memory to me now. Today, I find myself drawn by the social collaborations, the story-telling, and the msytic resonance of the fantasy environment.

Still, there is a tiny part of me, just a tiny part, that wants to ignite a balloon filled with lighter fluid and shout "FIREBALL!!!"
Posted by Mad Doctor Mark at 1:16 PM No comments:

Never have I seen an author sell their own work short as I have in this book. The cutsey last paragraph, in which the author mocks True Believers (OK, most of them deserve mocking), misses the big ideas that he had been exploring for the previous 300 pages.

People need a frontier on which to pin their hopes for a better world. The frontier is distant, but it is always attainable to those who are determined. Whether the Hollow Earth represents a new Manifest Destiny, as it did to Symmes in the 19th century, or a utopia, as it did to the Koreshite movement, or simply an escape from a miserable life, as it did to Edgar Rice Burroughs, countless people have seen in the earth what they have most wanted to see.

Else what's a heaven for?
Posted by Mad Doctor Mark at 2:50 AM No comments: