My Military History class concluded its unit on the Philadelphia Campaign of 1777 with a battlefield walk of Germantown.  Students got to see in person the terrain features which they had fought around in miniature the week before.  While much of Germantown has been urbanized, some of the buildings that saw witness to the battle in the 18th century are still there.
Here is the class on the steps of the Chew House.  One of the walls still bears the scars of Continental musketry.  Students liked the interactive display which showed the troop movements on Oct. 4.﻿ 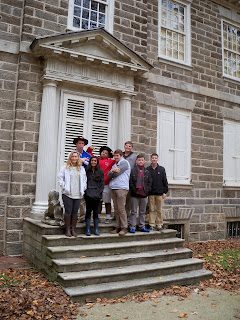 Our original schoolhouse stood about a hundred yards behind the main British lines in Germantown, just behind the high water mark of Washington's offensive.  The school was the largest building in Germantown at the time, and it served as a hospital for the British.  School tradition states that the Brits used our weathervane for target practice, but I'll be darned if I can see evidence of that. 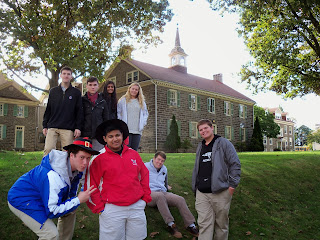 We then followed Washington's retreat to Whitemarsh, which happens to be less than a mile from our school's current campus in Fort Washington.  Howe's advanced troops skirmished with the Continental Army in the churchyard of St. Thomas' church.  The graveyard holds several Revolutionary War veterans. 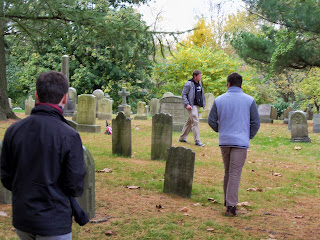 We ended the day at Washington's winter quarters at Valley Forge (Whitemarsh being to close to British-held Philadelphia).  Quite a theatrical crew.﻿ 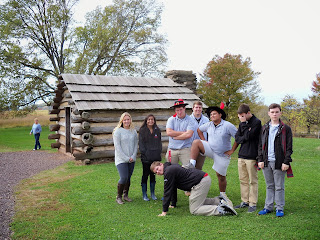 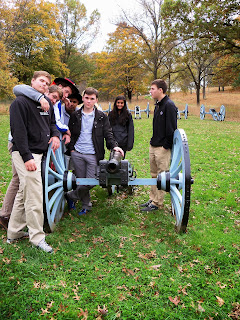 Posted by Mad Doctor Mark at 4:41 AM No comments: 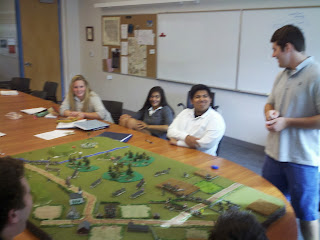 Our simulation came to a close last Friday.  The British threw their defending forces piecemeal at the advancing Continental army, and in the bloodbath that followed, they learned a valuable lesson in concentrating their forces. Towards the end, Cornwallis (played by Gillian, the girl on the left) negotiated a deal with Armstrong (played by Arjun, the smug-looking guy in the middle) to a standoff along the Wissahickon, infuriating both commanders.  Colin, on the right, was our Washington, and he was threatening to take Arjun to the woodshed.  Below is the shot of the battered PA militia peacefully facing off the Highlanders as the daylight waned. 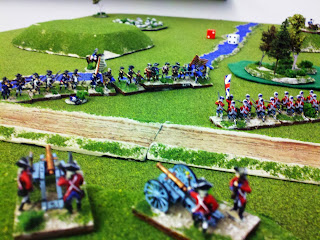 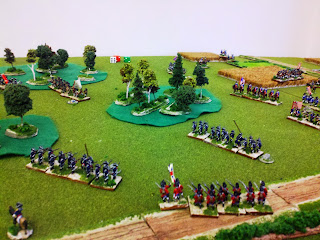 Above is a shot of the British center.  Try as they might, the British/Hessian commanders could not gain a local advantage anywhere on the board.  Even the Continentals whose advances were erratic all tended to show up on the line at the same time, burying the hapless Brits in firepower.  The s,hot below shows a British brigade finally  being able to deploy into a coherent firing line, but by that point in the battle, the Yanks held the Chew House, using it as an anchor for their own firing line which was long enough to envelop the British reinforcements.﻿ 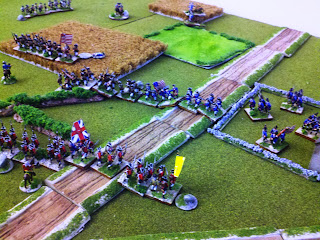 If Washington had won the Battle of Germantown, it would have been a huge symbolic victory.  I'm not sure it would have led to the loss of Philadelphia by the British, or made the Continental Army's ordeal at Valley Forge that winter any less severe, but coupled with the defeat at Saratoga less than a week later, it certainly would have been a major hit to British morale in the colonies and on the home front.  Perhaps the war would have ended sooner than it did.﻿

Posted by Mad Doctor Mark at 9:11 AM No comments:

Today marked our third class session in my class' refight of the battle of Germantown (1777) in glorious 15mm-o-vision.  While the first sessions seemed to follow the historical script quite closely, today we took off in bold, and occasionally silly, new directions.
Quote of the day came from the two girls in the class (one fighting for the Continentals, one fighting for the British) who petitioned to form their own nation. "Can't we declare ourselves Australia and declare war on everyone else?"
The British Guard arrive on the field, surveying the battle and deciding﻿ to engage the militia to their left or the New England to the right.  Note that the British artillerymen apparently found their blue coats too unfashinable and traded them in for a spiffy red.  The teacher learns a valuable lesson: never paint from memory. 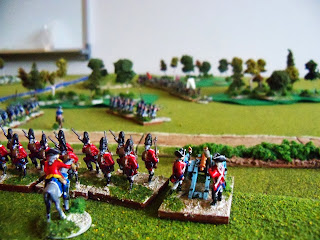 "Sir!  The rebels have advanced on our flank!"
"Have we taken any casualties yet?
"No, sir."
"What are they firing? Marshmellows?" 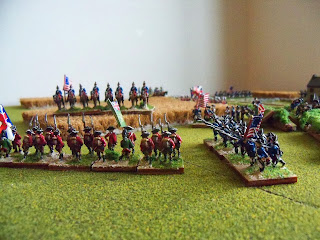 General Grant, his troops apparently mounted on snails, creeps towards the battlefield. By turn five, his troops were finally able to deploy into line.  In our next class session on next Tuesday, he may actually bring them into firing range. 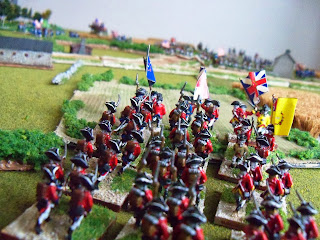 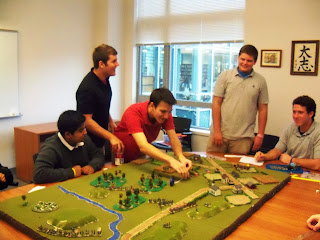 Most of the games I run with students develop into confusing scrums like this.  Individual units get sent off to meet a distant threat, and soon each commander has units all over the battlefield, each one struggling to maintain communication with their commander.  This was the scene after the Americans caught up with the British light infantry who fled the Chew House. On the left side of the photo, the brigade which was sent to relieve them is now fighting for their lives. 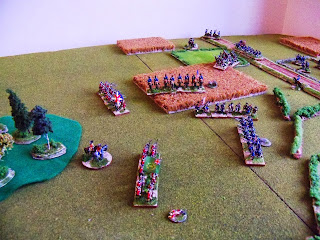 Both sides finally came up with a battle plan.  Sun Tzu's job is safe for the time being. 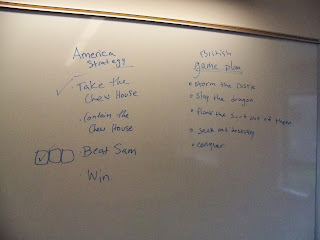 Tune in next week!
Posted by Mad Doctor Mark at 8:27 AM No comments:

Class (of 2013) Warfare. Once more, 15mm Germantown on the tabletop

Regular readers of my blog (thanks, Mom) know that I teach an elective in Military History to high school seniors at Germantown Academy.  Our School is over 250 years old, and before it came out to the Philadelphia suburbs, ir was situated right in the heart of Germantown.  The schoolhouse bore witness to the battle in 1777, serving as a barracks and then a hospital for British troops.  Thus, there are sentimental reasons why I choose to recreate the battle each year as the students apply what they learned from Clausewitz and Sun Tzu on the field of battle.  Given the importance of terrain, weather, command, and morale, it's a good teaching battle for other reasons as well.
This year we're fighting with my 15mm AWI armies and using the Black Powder rules more or less as written (I simplified them last year but didn't really see the need to continue to do so).  ﻿ 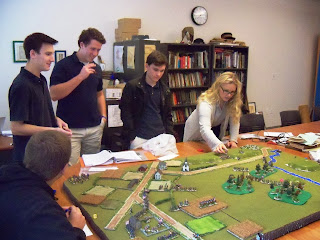 A view of the battlefield looking east.  The Pennsylvania militia are trying to pin down the Hessians in the foreground on the British left.  Unfortunately, their advance mirrored that of their historical counterparts, and botched command rolls left their attack fizzling.  meanwhile, the Hessians redeployed to meet Stepehn's column (I let the Contental reserve choose to come in at an entry point of their choice--they will arrive next turn in the center of the board on the left of the photo), ignoring the militia.  Insult to injury! They're even blocked from using their long-range rifles!﻿ 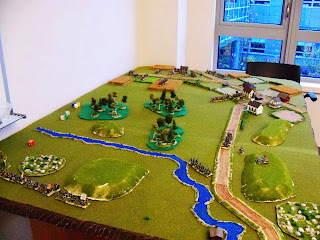 This is the scene on the east end of the battlefield after the first turn.  Washington's and Greene's columns surrounded the Chew House in the upper right, but the 40th Light Foot held out just as valiantly as their historical forbears did.  The anxious garrison in Gernmantown marched forward to make the Continental rebels pay, but did they leavve themselves vulnerable by this Sickles-esque maneuver?﻿ 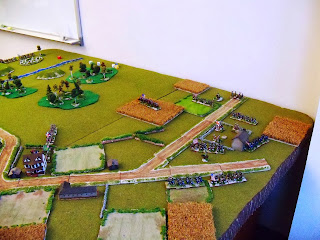 ﻿
The British commanders.  From the left are Cornwallis, Howe, Grant, and Knyphausen.﻿ 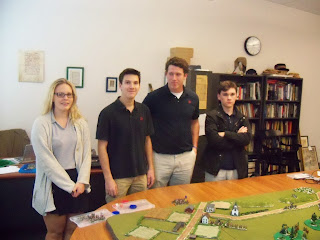 And here are the Continental commanders. From the left are Armstrong, Stephen (Command rating of 6!  Her quote: "Great. I'm the drunk.  Woo."), Washington (seated), and Greene.  They're doing their best to look badass.  Keep trying, guys.
﻿ 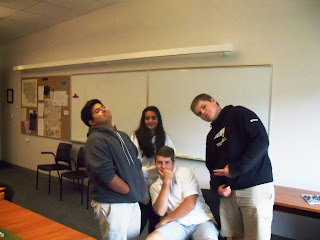 Now they're more relaxed, having driven the British from the Chew House and hammered the exposed British brigade.  Sadly, a perfectly-lined flank shot did not yield a single casualty, and the Brits may live to shake the hands of Grant's column, who is taking their damn time to relieve them. 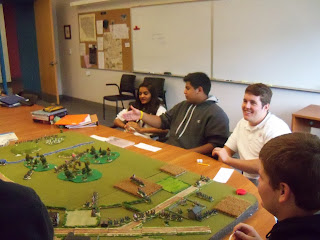 This year, I made my annual pilgrimage to the Battle of Germantown re-enactment, which is close enough to my house that I can practically smell the powder.  This year, my school asked me to lead a continuing education class for about 30 alumni and parents with the battle as a theme.  I led off witha  45 minute classroom lesson (no miniatures, but maybe next year!), followed by a trip to the re-enactment, with some stops in Whitemarsh on the way back to talk about the aftermath of the battle.  I had to good fortune to get the help of Steve Turn, a fellow member of Ambler Gamers,
to speak with my group afterwards.  Steve was a sport, despite the hot weather, and the crowd ate it up.  It seems daft to teach on my day off, but with an engaged audience like this one, I'd do it again in a heartbeat. and here, thanks to the generosity of one of the participants: https://www.dropbox.com/sh/mlguvhimatp4x2e/JGjwHxlCK5#/

Posted by Mad Doctor Mark at 9:36 AM No comments: