Been a long time

It's been too long since I posted here.  I've been keeping my nerdy self busy since last fall: adding zombies to my 28mm fantasy collection and testing out some rules I wrote with Germantown Academy's Leland Society (aka "Nerd Club"), whipping up some 28mm WWII Americans and Germans ("teaching tools for my Military History class," if anyone asks), painting up 15mm Stormtroopers and Rebel scum, and adding a few Napoleonic odds and ends.  Despite that rush of activity, I've been too lazy to post any of it online.

Then, last week, after many weeks of dormancy and scheduling conflicts, I was able to game with the Ambler Gamers once more.  Last week's game was AWI, with a Franco-American force trying to hold three bridges against the British and Hessians.  Kind of an 18th century "Bridge Too Far."  Joe had the Game Cave tidied up, with a full table ready to go. 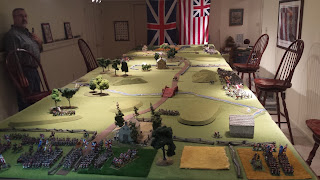 Below, the American regulars and militia prepare to head off the  main British thrust. 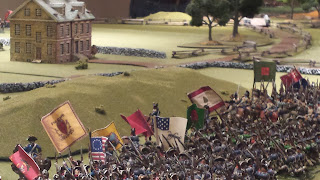 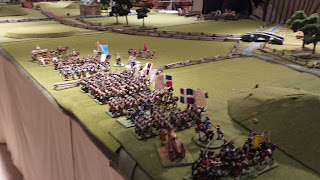 Above, my French, whose mission was to secure one of the bridges.  Their left flank was to be secured by a brigade of American troops.  As fate would have it, these same Yanks helped the Hessians to improve their marksmanship by catching unfortunate amounts of lead.  The French performed capably, thanks to Steve's ice-cold dice, but thanks to their exposed flank, stood no chance of holding their ground.

(Below) While Scott plans his advance, Joe shows Herb his Hessian brigades.  These naughty little sausage eaters would prove to be my bane. 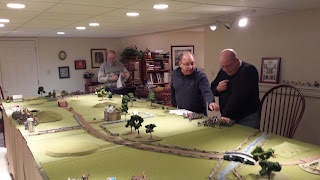 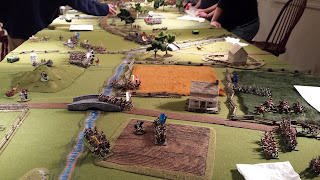 We had some special guests at our game--two gentlemen looking to produce a show for the Discovery network which would explain famous historical battles with the use of military miniatures.  We were happy to share with them our particular brand of nerdy goodness. 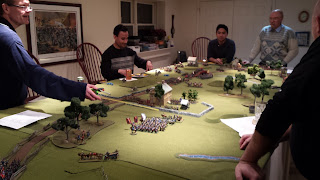 Posted by Mad Doctor Mark at 5:30 PM No comments: