OK, one thing that bugs me is the way the above line from Henry V is usually taken to mean "Shout and make a lot of noise!" In fact, "havoc" is the Old English term for hawk, so Henry is actually giving a command to his bird, not to his troops.

So there you go.

Anyhow, I just got a shipment of 10mm medieval soldiers from Old Glory, taking full advantage of their 40% discount offer. I plan on using the Basic Impetus rules with them, which have me excited about pre-gunpowder wargaming once again. DBA was just not doing it for me--it drew too many rules lawyers and chess players. I love the element of chance, and I love rules that reward bold strokes and wise restraint. Impetus looks like it fits the bill.

The soldiers look great. They seem to be cleaner casts than the Napoleonic models I bought from the same manufacturer (which were pretty good to begin with). They look fun to paint up. My only concern is in mounting wire spears on both the infantry and cavalry. I've never done that before, and I am notoriously bad at using glue. Wish me luck.

I probably won't start painting these guys up until I am done with my Napoleonic French and Austrians. I'm slowing down with those guys, but I expect to finish with them sometime in June.
Posted by Mad Doctor Mark at 12:52 PM No comments:

Dominica Trip: Getting my history geek on

My wife and I took our first grownup vacation in six years. We visited the island of Dominica for a week. I liked pretty much everything about the island (except for the terrifying roads). Beautiful scenery, dramatic waterfalls, excellent snorkeling, and a near-total absence of mass-produced tourism.

The island also has a rich history. Passed back and forth between the British and French several times in its colonial existence, both cultures left their mark on Dominican society today. The island was too rugged for the large sugar plantations that made the slave experience so harsh on other islands. Be that as it may, the island was witness to several notable slave revolts, most notably that of the Maroons in the early 19th century. Slaves who escaped and made it to the island's interior could live free of retaliation for years. It was not until 1807 that the British army hunted down the Maroons and executed their leaders in the most violent means imaginable.

There are two very evocative 18th century forts on the island, both worth a visit even for non-history buffs solely for the spectacular scenery.

The first one of these forts we visited is at Scott's Head, at the southern tip of the island. Scott's Head is a small fishing village (with lots of inexpensive snackettes--we had a barracuda lunch) on the rim of a collapsed volcanic crater. It is a top site for Scuba divers, and the snorkeling was not too shabby, either. We saw lots of great sponges, an octopus, and all manner of brilliantly colored fish in two dives there. The view below is looking back at the village from on top of the rocky outcrop that houses the fort. That's the Caribbean on the left and the Atlantic on the right. 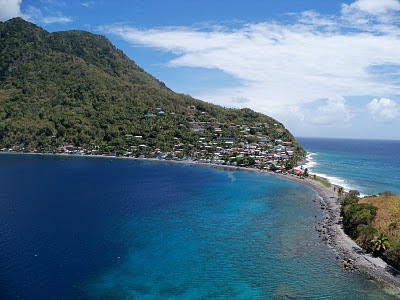 The next photo is of Scott's Head itself, guarding the entrance to the harbor. The fort is located at the top of the cliff to the right, right where the bluff seems to level off. You can see it if you zoom in. 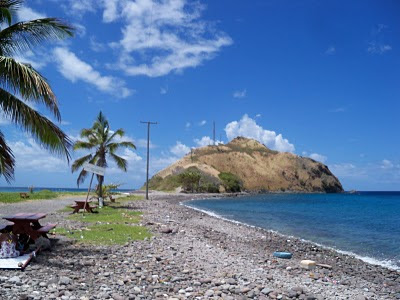 The trail is steep but short. There is a ruined magazine where the trail turns right, and a quick march through a lemongrass meadow leads you to the battery. 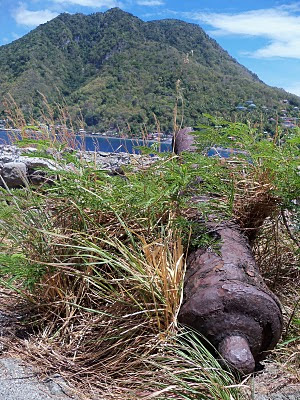 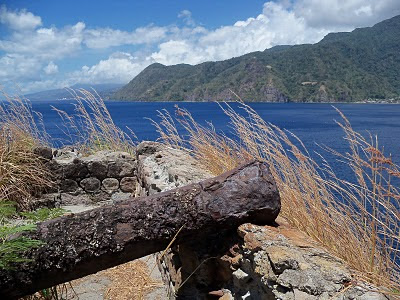 The main fort on the island is located on the headland at the northern part of the island that is known as the Cabritz, the promontory that looks like a two-humped camel in the photo I took out of the airplane window. The spit of land that connects it to Dominica is marshy, and it is easy to get the sense of why this area was chosen to defend the island and the town of Portsmouth, which sits in a harbor to the south. 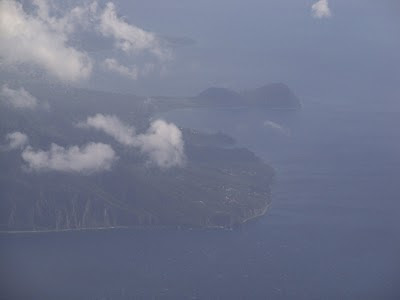 This is a view of Fort Shirley, on the southern flank of the Cabritz. Lord Cochrane retreated here when the French briefly took the southern part of the island in 1807. The French decided the fort was not worth the price they would pay to take it, so they looted what they could and retreated to Martinique. For the most part, the fort was situated in the saddle between the two humps of the headland. 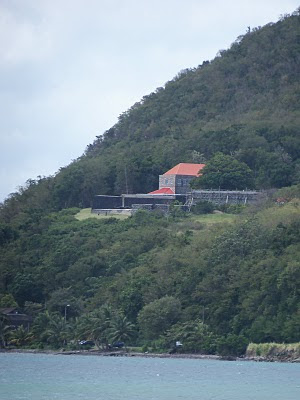 A quick climb from the visitor's center leads one to the outer gated of Fort Shirley. Beyond it are the fruits of about a decade of careful restoration work. 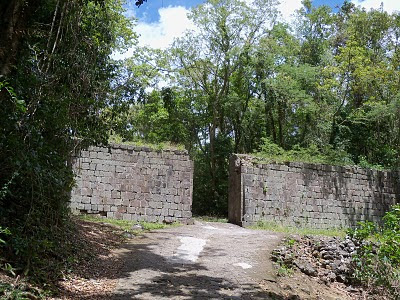 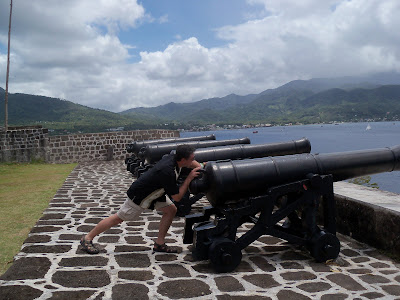 Here is the restored battery, with five 36 pounders trained on the harbor where a bunch of millionaires moor their luxury yachts. Note the careful aim I am taking... 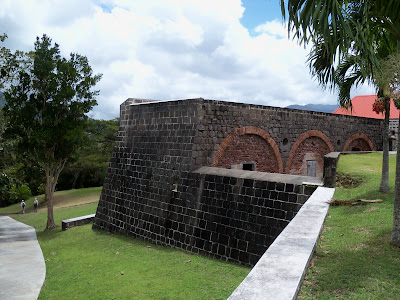 This is the fort which guards the inner perimeter of defenses. Attackers would have had to assail three lines of defenses if they wanted to attack from the landward side. 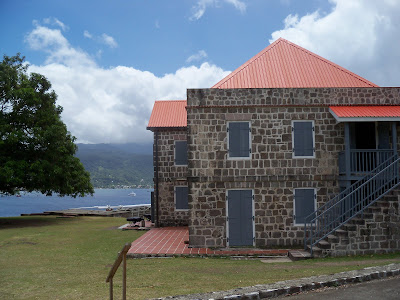 Above is the restored building where junior officers lived. There is a bar and reception hall inside. Well-heeled Dominicans rent it out for weddings. 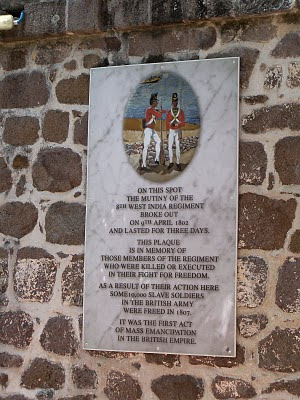 Above is a plaque signifying that the fort was the site of another anti-colonial revolt. In 1802, the 8th West India Regiment held out for three days. While the Brits responded with their usual reprisals, it did push the crown towards emancipating colonials who fought on behalf of the King. The coolest site at the fort was a battery on the north side of the headland known as the Logan Battery. The restoration is still underway, and the jungle still claims much of this collection of ruined buildings. A banyan tree grows out of the officers' quarters. A kitchen and magazine stand nearby. Below, Mrs. Mad Doctor explores the ruins, which is home to about 10,000 lizards. 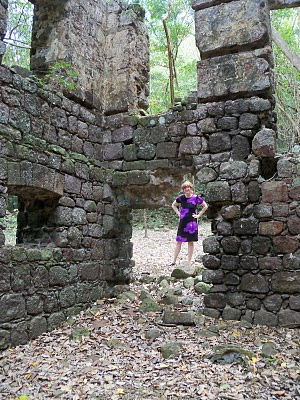 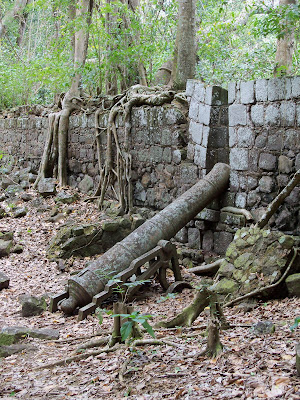 Above is one of three guns that still protect the Logan Battery. The Caribbean is now invisible from the battery ruins. However, the guidebook mentioned that the soldiers stationed here were witness to the Battle of the Saints in 1782, a few miles offshore to the north. I decided to hack my way through the jungle to the water's edge to see if I could see the Isle of the Saints. 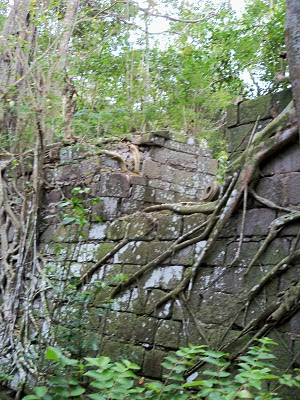 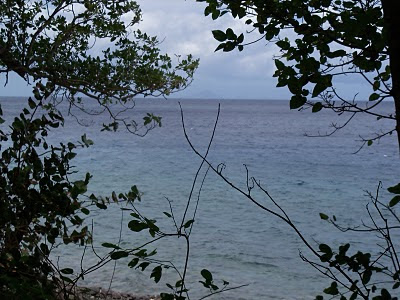 Above is the view that I earned for my troubles, which involved a pair of legs that looked like I had tied a dozen angry cats to them. The map says there was a forward battery at the water's edge. All that remains is a pile of rubble that looks like a drystone wall. Through the brambles, you can barely see the island, so the battle took place in the channel between here and there.
Posted by Mad Doctor Mark at 7:19 AM No comments: