When the lead starts flying

Seven students selected my miniatures mini-assembly.  None of them had any table top gaming experience ("Is this like Risk?" I was asked repeatedly).  However, the rules were simple--I used Fistful of Lead, perhaps the perfet set of rules for convention-style skirmish games--and the kids were bright and willing.  We played four turns, enough to reach a satisfactory resolution.  Each student had a gang, and the goal was to survive the game with as much plunder as possible from the ghost town.  Grab or shoot?

The winner was Mike, the dude in the non-dress-code blue hoodie who stormed into the center of town, snatching up a half-dozen crates before firing a shot.  He was feeling really confident until he realized that he was now the target for all the other players.  ("Wait...what?" he said as a hail of bullets came at his gang) .  Though two of his gunfighters were killed by long-range shots, he only needed one survivor to cash in his loot.

Poor Shira, the one girl in the group, barely got out of the gate when two of her gunfighters went down after an attack by Dylan, the guy to her left, who ended with little to show for his aggression.  There was a sharp little firefight near the hacienda, and a few banditos took some serious wounds, resulting in a draw on that end of the table. 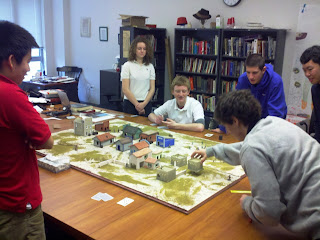 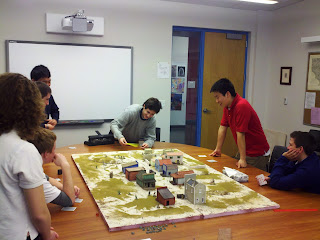 Posted by Mad Doctor Mark at 9:14 AM No comments:

There's gonna be a shootout!

I'm running a miniatures demo in my school tomorrow.  Seven kids will each get a small gang of outlaws, gunfighters, and varmints and try to gather up the shipments of root beer scattered throughout a ghost town.  Gunplay is optional, but really fun.

I set the game up in my classroom today. The buildings are Armorica, Old Glory, and scratch built. 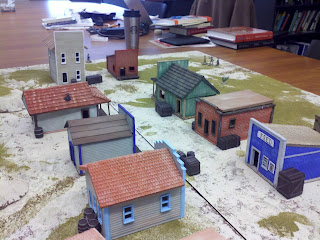 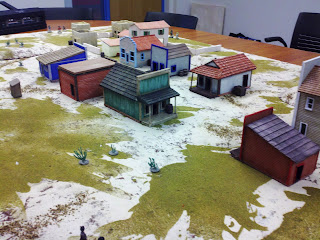 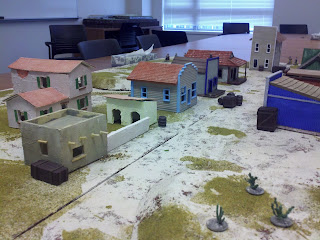 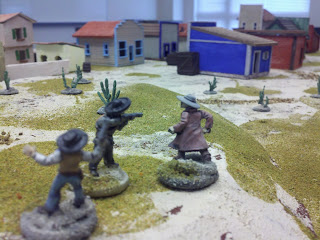 Posted by Mad Doctor Mark at 6:18 PM No comments: 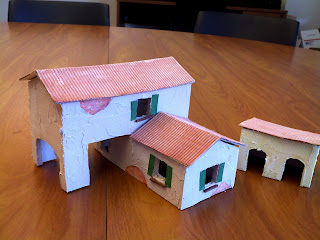 My next effort at a stucco house.  This time, the stucco is crumbling away, exposing the brickwork underneath.  I'm going to call this structure the Customs House, with a little storage shed for out back.

Posted by Mad Doctor Mark at 7:50 AM No comments:

One house does not a village make, but it's a start

Based on some helpful advice I got on TMP, I chose to develop my pirate town with a Spanish colonial feel.  When it is done, the town will have an adobe church, a governor's mansion, a cantina, a Vauban fortress, a few houses, and some sheds.  I thought I would start small by building a prototype house.

It could not have been easier.  I cut some foamcore for the walls and some matte board for the roofs.  The "tiles" are painted and drybrushed corduroy glued to the roof boards.  I applied epoxy grout to the walls to simulate stucco.  Some brown paint mixed in and a final drybrushing with white provided color.  Them some balsa beams and painted cardstock shutters, and voila! 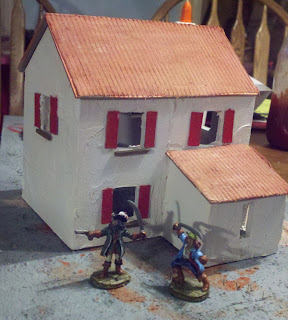 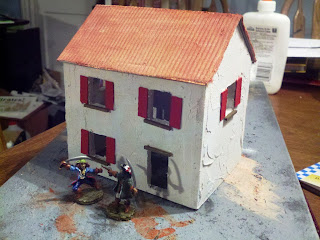