Disclaimer: This review contains spoilers. It also contains my complaint that reading criticism of Pullman’s work spoiled my own discovery of his ideas. Be warned: if you have not read His Dark Materials to its conclusion, this review might spoil some of your own fun.

In the His Dark Materials trilogy, Philip Pullman has crafted one of the most engaging and intelligent works of fantasy in recent times. The main characters are engaging, the supporting characters have depth, and the story moves along with art and purpose. Pullman has crafted a complex world (or rather, multiverse) for his characters to inhabit, yet he reveals Lyra’s world and the cosmology surrounding it to the reader in small manageable doses, preserving a delicate balance between creating a sense of wonder and establishing an alien environment.
After finishing the first book in the trilogy 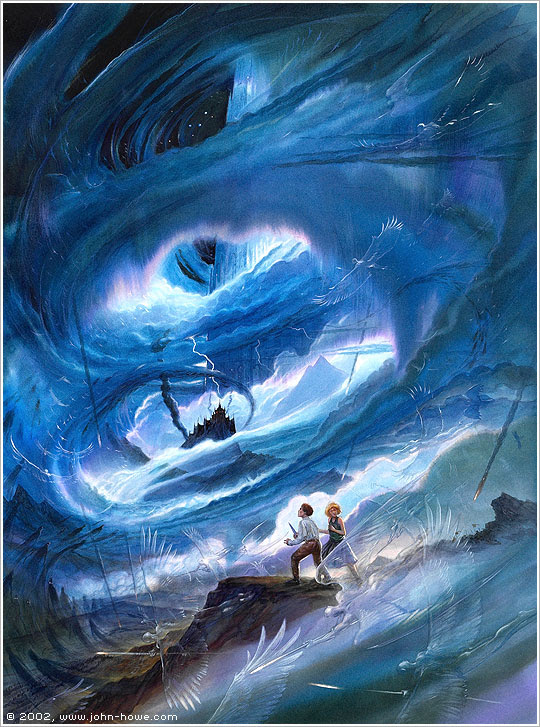 (The Golden Compass, known outside the US as The Northern Lights), I checked out Pullman’s Wikipedia entries to get an overview of critical responses to the book. I was somewhat surprised to find the firestorm of controversy surrounding it. This review in particular, focusing on Pullman’s works as the “anti-Narnia,” piqued my interest, as I found little material any group (save perhaps Tartars) would find objectionable in the first volume. To be sure, most of Pullman’s anti-Christian themes fully emerge in the second two books, building to a crescendo in the second half of The Amber Spyglass. The weight of criticism colored my reading of the final two volumes, and I wish I had the chance to read them unencumbered.
I have always been amused by the angry response of religious groups to literature they find objectionable. A book is, after all, just a book. If one’s faith is so fragile as to be threatened by a work of fiction, or a movie, or a cartoon, then perhaps it is the faith that is the problem, not the material. I was a Christian before I began The Northern Lights, I remain one after finishing The Amber Spyglass. Pullman, however, have given me much to chew on. Faith without doubt is nothing but bloody certainty, and both Pullman and I can agree upon the danger of that path.
But while I was looking for an atheist manifesto in the pages of His Dark Materials, I was somewhat disappointed. True, Pullman kills God, shown as a pathetic, helpless angel, but in his book the Supreme Being is finite, having ascended to power within creation, rather than being the ultimate Creator (note 1)Those characters who know the true nature of the Authority express agnosticism about the origin of the universe. The Authority is seen as less malevolent than his angel (and usurper) Metatron, for while the former has retreated to the passivity of the watchmaker, Metatron strives to become a more interventionist deity. So perhaps there is a watchmaker who created the watchmaker. Pullman leaves room for doubt.
Pullman certainly deserves criticism for being anti-religious. He fails to create one sympathetic character in the organized religious hierarchy he establishes. Only characters who reject the faith (Mrs. Coulter, Mary Malone) earn some sort of redemption. Clerics are shown as duplicitous, murderous, and hypocritical. Father Gomez is a fanatical trained assassin who performs “preemptive penance” before he sets out to murder the main characters. The Pope stand-in tries to kill Lyra with a bomb which he sets off himself which has the unintended consequence of nearly destroying all free will in the universe. Pullman repeatedly refers to the church he creates as perpetuating a vast lie (though, ironically, much of the plot depends on the Genesis story being at least metaphorically true).
But while Pullman creates a work which is anti-religious and anti-Christian, it is not devoid of values and ideas that are more at home in a theistic universe than in an atheistic one. These include Pullman’s view of death and the afterlife, the theme of redemption, and Pullman’s faith (yes, faith) in moral absolutism.
DEATH
Pullman sends the dead to a grey world that has much in common with the Homeric afterlife. Lyra’s journey there in Book III even has echoes of Odysseus’ journey in Book XI of the Odyssey. Souls mill about in unchanging tedium, taunted by harpies who reveal secrets and ugly truths to the dead. 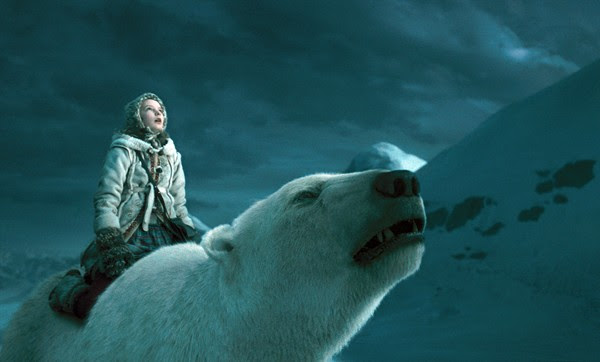 Good and bad people alike share the same fate, and the world of the dead seems to exist quite apart from the power of the Authority and his church. The dead envy the living, claiming they would prefer a moment in life to an eternity in the afterlife (again, one hears the lament of Achilles). Yet Lyra and her companions end up creating a purposeful afterlife though her actions. Death becomes a transitory state. Those dead who can truthfully confront their past lives are free to enter into a Daoist state of oneness with the universe. Those who labor under self-delusion suffer the same fate as before, made worse now by the denial of the privileged state offered to the redeemed.
REDEMPTION
At the end of The Golden Compass, both of Lyra’s parents come across as loathsome individuals. Asriel, her father, is so blindly ambitious that he commits murder, and her mother, Mrs. Coulter, engages in horrific experiments that would make Megele proud. Yet each comes to the realization that sacrifice of the self for a higher cause (For Asriel, the cause of the Republic of Heaven, for Mrs. Coulter, the love of her daughter) is worthy, and each is forgiven by the other characters for their final acts. A better example is that of Lyra herself. As a girl, Lyra’s main attribute is her ability to lie convincingly. She repeatedly uses this gift to save herself and her friends. Her deception of the bear-king Iofur Raknison earns her praise from Iorek and other sympathetic characters. Yet Lyra must learn to give up lying in order to reach the level of maturity she needs to reverse the flow of Dust. Her new ability to embrace truth renders the alethiometer, her truth-telling surrogate, useless. But for Pullman, telling the truth and a Higher Truth are really one and the same, made clear by Mary Malone’s revelation at the aperture to the world of the Dead. Past wrongs can be forgiven through good moral choices, if not by a higher Authority, than by the author and the reader.
MORAL ABSOLUTISM
Indeed, the greatest redemption that takes place in the book is that of the multiverse itself. The deeds of mankind have upset the balance, allowing the benevolent Dust, bestower of rationality, compassion, and all other desirable human characteristics, to seep out of the material worlds into an abyss. Will’s subtle knife creates leaks in the flow of Dust, and the bomb set off by the Magisterium threatens to extinguish its flow forever. The pure love between Will and Lyra manages to stem the tide. But Dust can be restored only if humans, through their actions, create more of it. And how does humanity generate Dust?
We have to be all those difficult things like cheerful and kind and curious and patient, and we've got to study and thing and work hard, all of us, in all our different worlds, and then we'll build...' [...] 'And then what?' said her dæmon sleepily. 'Build what?' 'The Republic of Heaven,' said Lyra. Amber Spyglass, ch. 38
For much of the trilogy, our young protagonists, caught between the frightening moral poles of the Magisterium on one hand and Lord Asriel on the other, must forge their own moral code. The children cling to their decency even when all forces of the adult world try to draw them from it. Yet by the last book in the trilogy, Pullman has created a bipolar moral system, handed down from above, much like the one he takes to task. He tries to argue that good and evil are not absolutes, (note 2) yet he clearly takes sides. On one hand is order and oppression, on the other is freedom and human potential.(note 3)  Living within a liberal, progressive world, I find it hard to argue with Pullman’s values. Yet by choosing moral absolutism over relativism, he creates the potential for the same kind of tyranny he deplores when it is in the service of the hierarchical church. He denies that evil can come from rationality (witness the horrific and violent failure of Robespierre’s efforts to replace Christianity with a more ‘rational’ faith) or that wisdom and reflection could come from within (and not despite) a hierarchical church or state. My problem with Pullman is not that he tries to overthrow Narnia, it is that he ultimately fails to replace the moral pedantry of Lewis.
Before he takes a final swipe at Pullman on sanctimonious religious grounds, Peter Hitchens has this to say about the trilogy: In an age where most stories written for grown-ups are about nothing very much at all, Lewis and Pullman have addressed the great issues of this time and all time, and both deserve to be read by adults. I could not agree more. I will absolutely forbid my children from reading this work until they are mature enough to handle it. Then I will require them to read it.

And the less said about this, the better. It's clear that concern over whether or not there would be a sequel led to drastic alterations to the ending of The Golden Compass. Shame.


Notes
Note 1:  "He was an angel like ourselves—the first angel, true, the most powerful, but he was formed of Dust as we are, and Dust in only a name for what happens when matter begins to understand itself. Matter loves matter. It seeks to know more about itself, and Dust is formed." Amber Spyglass, Ch. 2.

Note 2:  “…I stopped believing there was a power of good and a power of evil that were outside us. And I came to believe that good and evil are names for what people do, not for what they are. All we can say is that this is a good deed, because it helps someone, or that's an evil one, because it hurts them. People are too complicated to have simple labels.” Amber Spyglass, ch. 33
Note 3:  'I was flying high,' she explained, 'looking for a landfall, and I met an angel: a female angel. She was very strange; she was old and young together,' she went on, forgetting that that was how she herself appeared to Mary. 'Her name was Xaphania. She told me many things... She said that all the history of human life has been a struggle between wisdom and stupidity. She and the rebel angels, the followers of wisdom, have always tried to open minds; the Authority and his churches have always tried to keep them closed. She gave me many examples from my world.' Amber Spyglass, ch. 36.