I got it into my head to write a song for my art history class. At the risk of making a humiliation in front of thirteen students gain a truly global reach, here are the lyrics.


The artists in ancient Egypt
drew men from the front and side.
Was the pharaoh going or coming?
Who cares? Just enjoy the ride.
Just study the Big 200,
You’ll learn things and then rejoice.
Ace every one of your quizzes,
Four point or multiple choice.

In 113,
Room 113!
Darling it's cooler
Than the whole school here
Take it from me!
We have no anxieties,
Just a naked Hercules.
No time for crammin’
While we be jammin’
In 113!

Hey, Ms Professor Stokstad,
Could you write a little less?
My art book is so damn heavy,
I use it for my bench press.
In class I am always happy--
Relax and enjoy the slides,
temples and great stupas now,
Where the gods live deep inside.

In 113,
Room 113.
In cities Roman
Temples and homes are
With symmetry!
Did you study for the quiz today?
No, so let’s get Rabuck astray.
We’ll hear the stories
‘Bout travel’s glories,
In 133!
-Room 113.
Since life is sweet here
We got the beat here
Naturally
Haigia Sofia’s got a dome
Rabuck’s got a Y chromosome,
It’s all alone there
In his big black chair
In 113!
Posted by Mad Doctor Mark at 3:26 AM No comments: 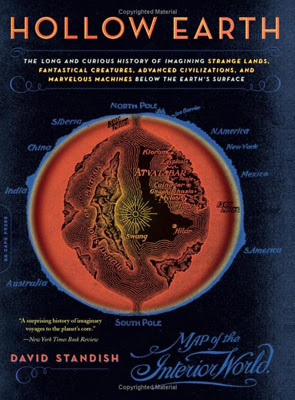 I have just finished the first chapter of David Standish's book Hollow Earth (Da Capo: Cambridge, MA, 2006). In it, he explores the persistent belief that our earth contains a subterranean world beneath our feet, tracing the idea's development from the scientific revolution through romantic nationalism all the way to the Utopian religious movements and the pulp novels of Edgar Rice Burroughs that I loved so darn much as a teen.

I was hooked on the book after this line in the intro: "There have been many books recently about important ideas or commodities that have changed the world. This one, I am happy to say, traces the cultural history of an idea that was wrong and changed nothing--but which has nevertheless had an ongoing appeal." (p. 13)

How could you not love a book with that kind of confession at the outset?

Standish belies the self-professed triviality of his subject in the first chapter, however, contrasting Edmund Halley's lauded astronomical contributions to the scientific revolution with his cockamamie assertion of not one but three worlds spinning in the concentric spheres below the earth's outer crust. In each of his many digressions in the careers of Halley's peers, Standish notes the tension between the empirical logic of the early scientists and their reluctance to give up their old Aristotelian views on the nature of the universe. For instance, Halley's belief in the hollow earth came about as a way to explain fluctuations in the earth's magnetic pole, but his assertion that the spheres-within-spheres were inhabited was based purely upon his belief that noting in creation could exist without a purpose.

And for Thomas Burnet, former chaplain to King William III, the hollow earth helped explain where all that water from the flood went to. The rapidly draining flood waters twisted the formerly perfect surface of the earth into the seemingly random land masses that exist today, what Burnet called a "hideous ruin" and our "dirty little planet." (p. 26)

But the emergence of a wrong-headed belief, shrouded in the language of both science and reason, nonetheless speaks volumes about the world of the scientific revolution. There was not some switch Newton threw to dispel all shadows of the medieval mind and bring in the rationality of the enlightenment. Seventeenth century scholars apparently had little difficulty marrying the rational and irrational in their minds. Judging by the persistence of belief in the Hollow World, I would argue that they are not too different from us.

I've been a Jean Shepherd fan since I was old enough to sneak into my parents' bookcase. I love "A Christmas Story," but I sorely miss the American Playhouse version of "The Great American Fourth of July (and other disasters)"--starring a young Matt Dillon, no less. So when I went to look for t on YouTube, not only did I find what I was looking for, but I found the sequel to "Christmas." "My Summer Story," despite using b-list talent rather than c-list, does not have the pop of the original, but, hey, with Shep's narration, I'm willing to forgive a lot.

Posted by Mad Doctor Mark at 12:00 PM No comments: