Russian Hussars, why not?

So I go to the gym several times a week, and while I huff and puff on the treadmill, I watch inspirational films on my smart phone, courtesy of Netflix.  These days, I'm dutifully plowing through the 1956 costumer, War and Peace.  I thought: Henry Fonda! Audrey Hepburn! Anita Ekberg! What could go wrong?  Well, as it turns out, I puzzled at the Oscar the movie won. If felt like a dusty, labored effort to get through all the good bits of the film, without creating a context for the events portrayed or developing the characters into believable or likable people.  Audrey Hepburn, whom I normally love, is the worst, bluring out lines from various chapters just to get them in.  Poor Natasha seems like a deranged loon...no, wait.  Henry Fonda as Pierre is the worst.  The consummate American everyman is woefully out of place as the soulful bear of a man who agonizes over his own inability to commit to action.  And don't get me started on the battle scenes. Six guns (conveniently screened by a treeline) go off, and Kutuzov cries "We are flanked by the French!"   End of Austerlitz.  Well, that was simple...  The greatest visual of the actual battle--French guns shelling the frozen lake across which the Russians are fleeing--must have been deemed too costly to folm.  The battle took place on a sunny spring day in the film.

Anyhow. The costumes are nice.

It inspired me to paint up some 15mm Russian Hussars that I bought and primed 25 years ago.  I no longer collect 15mm Napoleonics, so I'll show them off in my classroom for a few weeks before I offload them on eBay.  Enjoy. 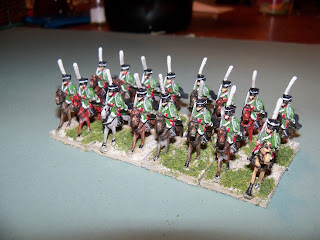 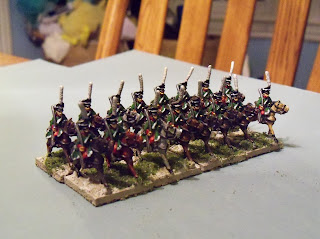