After reading about the Philadelphia Campaign of 1777 and playing out a simulation of the Battle of Germantown in class, my Military History class took a battlefield walk of important Revolutionary War sites int he area. We started in Germantown, visiting both the Chew House (second photo below. Some battle damage is still visible on the wall) and the locaiton of the main British lines. The original site of our school was used as a hospital by the British during teh Battle, so we got to view the old schoolhouse, too. 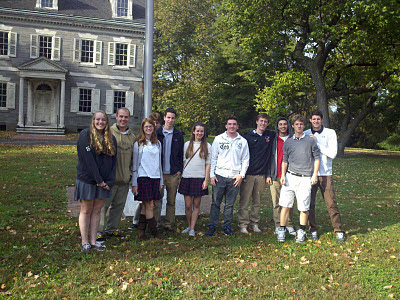 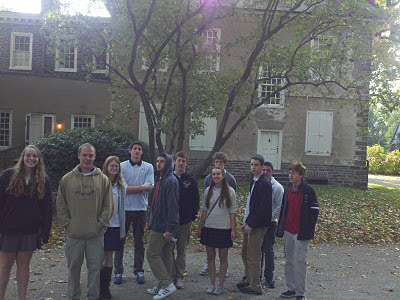 We took a trip to the former paper mill of Rittenhousetown, where the Pennsylvania Militia unsuccessfully tried to pin the British left with an attack across the Wissahickon Gorge. There are few more vivid examples of how terrain can shape tactical decisions. 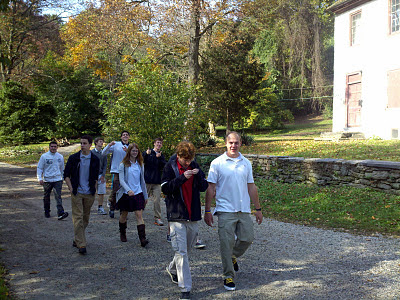 The, after a stop at a Revolutionary-era food court, we went to Valley Forge, site of teh winter encampment of 1777-8. The students checked out the huts and gained an appreciation for the living condition, even on a gorgeous fall day. 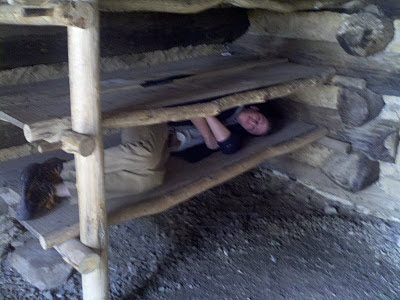 After checking out the outer defenses, we visited the artillery park and discussed the importance of a reserve. 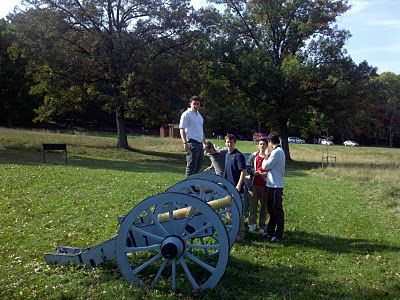 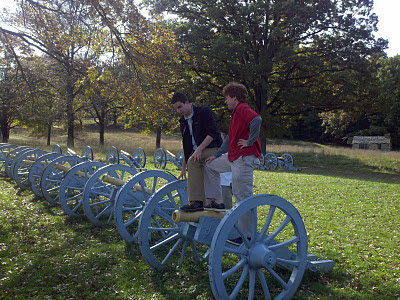 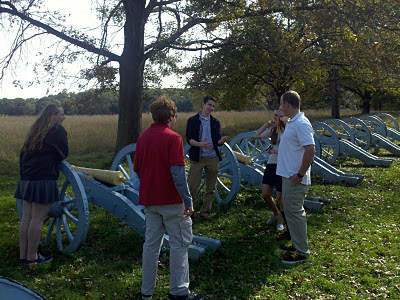 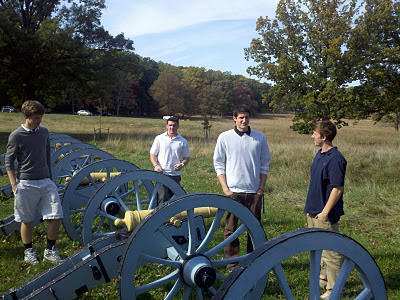 The Battle of Germantown: A class exercise, pt. 4

We break for the long weekend with some serious shooting but no units lost so far. The Americans have been aggressive but the British have countered every move so far. The students have been getting into the game, with cheers for amazing rolls and jokes about runs of bad luck: scenes that would be familiar to many veteran gamers. I created a very simple set of wargaming rules, and several students have already asked for more complexity. For instance, I freely allow friendly units to pass through each other. Someone asked me "But shouldn't that make their lines disorganized?" Smart kid.
The American right is a mess. Swarms of militia and riflemen try to take out a small command of Hessians. But those are some tough little Germans. They had to roll a 10+ on two dice to stand up to a dragoon charge after having been shot up real good. They're still there... 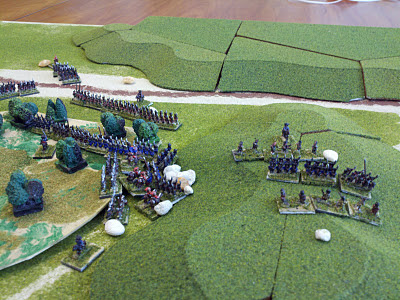 The Brits hold a strong position in the center, which the Americans are attempting to flank by advancing through the woods. The Americans opened an artillery duel in the center but quickly took the worst of it. 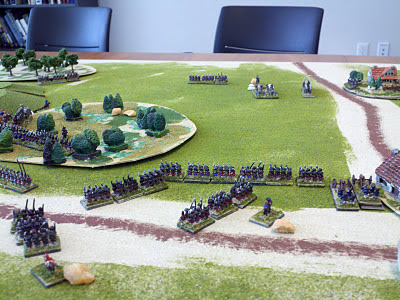 Some Tory militia try to hold off a strong push against the British right. Crappy rolling by the Continental commander is making the Yanks rethink their offensive. 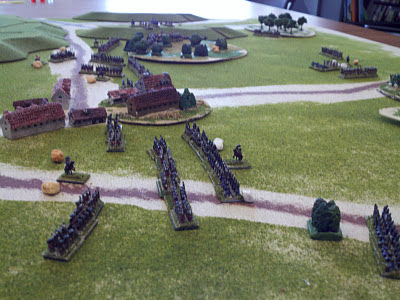 The Battle of Germantown: A school project, pt. 3

After our second day of gaming, the armies are close enough to start shooting. Washington's army bypassed the Chew House and advanced across the rough terrain in the center. A violent fight for the woods in the center appears to be in the works. The Pennsylvania riflemen on the left bank of the Wissahickon (close to my house!) got the first volley in, but a return volley by the British drew the first blood. Will they have the numbers needed to follow up? What will happen when the American left crashes into the outnumbered British defenders? We have one more class before the long weekend... 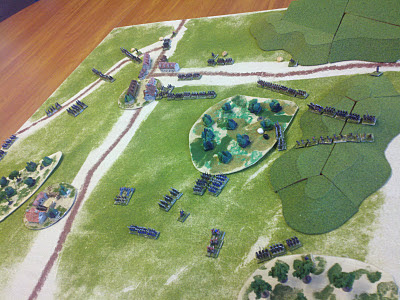 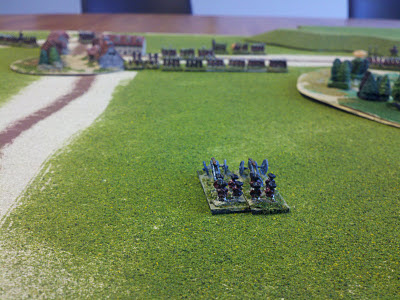 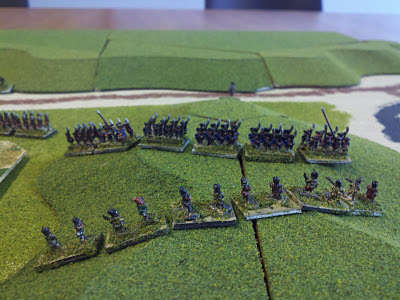 Posted by Mad Doctor Mark at 1:22 AM No comments:

The Battle of Germantown, A Class Project, pt. 2

The game is underway, with the students being given roles, deploying troops, and playing through their first turn. Some shelling of the Chew House, but overall the guns have been silent.
Below, the British Generals plan their strategy. 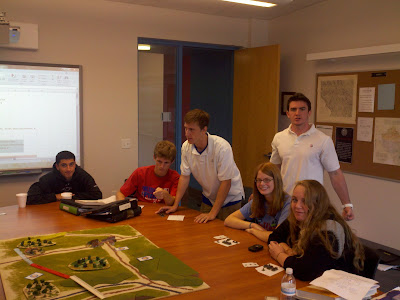 And the American generals put on their angry faces as they prepare their attack. 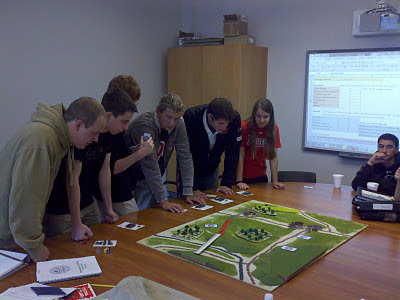 Below is the battlefield after one turn. The Americans have chosen not to put pressure on the British left by advancing down Ridge Pike. Instead, they are putting most of their forces on the British right. By and large Washing is choosing to bypass the Chew House, a move which will slow his attack but will probably give him a larger punch when he hits British defenses. Posted by Mad Doctor Mark at 2:48 AM No comments:

The Battle of Germantown: A Class Project, pt. 1

I teach a Military History elective to high school seniors. Because of my school's history, we examine the Battle of Germantown (1777) as a case study. This year, there are twelve students in my class. One student on each side takes the role of Washington or Howe, and the other students play the roles of divisional commanders. Below is the game board I made for the game, just plywood with paint and flocking. We are looking north. Germantown Pike is the road that runs from south to north. And the Wissahickon Creek (which cuts through my school's current campus) runs up the left side of the board. Fortunately, I have a big Harkness table in my classroom which gives us ample room for the simulation. 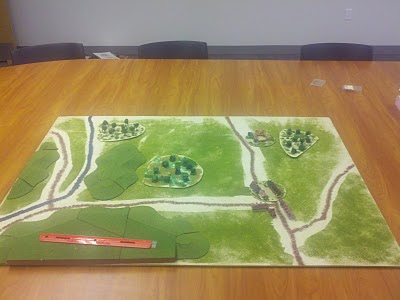 The figures are 6mm AWI Baccus. They're a little tricky to see, but they fit nicely in a small space so we can get a whole class around the gaming table. Here is some Continental line infantry. 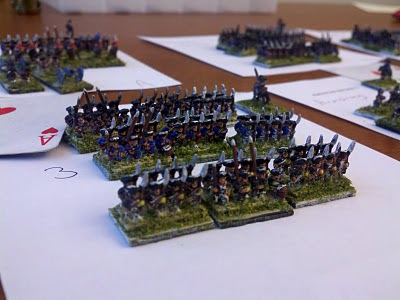 Below is the entire American command. Each division was assigned a card that the Commanders in Chief used for unit placement. We had read both Clausewitz and Sun Tzu, so I wanted to simulate the 'fog of war' as much as possible. Especially because the fog of war at Germantown was said to be a real pea-souper. 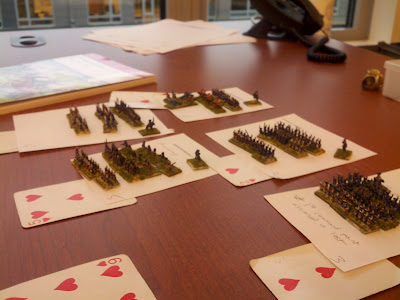 And here is the British Command. 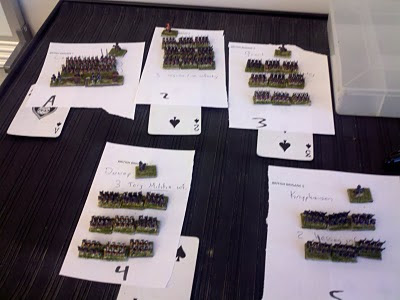 I've done this simulation before, but this year I have simplified the rules, since my gamers are absolute novices. Changing formation takes a full turn, and players choose between a line and march column. Shooting forces a morale check. One failed check results in disorder. A disordered unit which fails a check is eliminated. 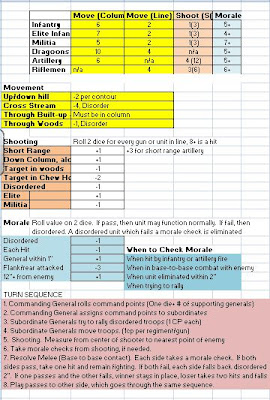