What miniatures do when we're not looking

I always suspected something like this happened when I left my gaming table.

My son got a stop-motion camera for Christmas, and if he can play with my toys, I can play with his. I've painted a lot of Zulus in the past month, and they're just about ready for their first battle against the 24th.

As you can see, the table needs a little work. One more batch of troops, and I'm going to start painting up the buildings of Rorke's Drift. Can't wait to see what my little guys will do once they have that to play with!
Posted by Mad Doctor Mark at 3:17 AM No comments:

Well, I can honestly say that painting Zulus is a lot easier than painting Colonial-era British soldiers. Nonetheless, the Old Glory soldiers painted up easily, and any roughness in the paint job is the fault of the artist, not the caster. I left a few of the helmets white. I figured that the officer would not go for such a craven practice as camouflage, and the sergeant would just be too badass to feel the need to hide his gleaming white helmet. The others are just rookies who don't know any better. I chose to paint both jacket and trousers several shades lighter than color charts would indicate. I'm glad of my decision. Both came out dark as it is.
At this rate, I can be done with the whole lot by May. As I wrote before, though, I doubt I'll be able to wait that long before I start on the terrain and have an old-school fracas in my basement. 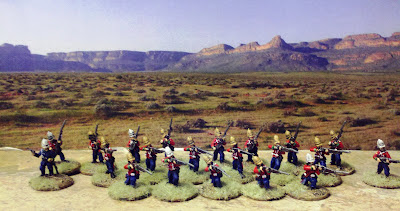 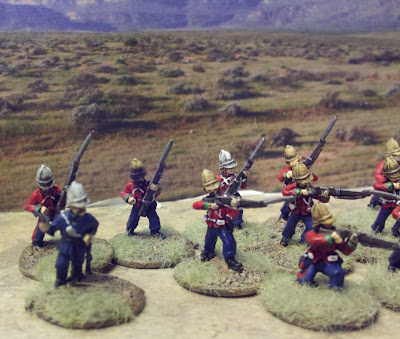 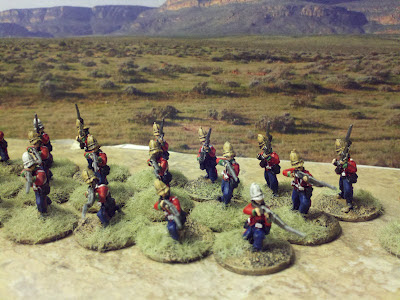 Posted by Mad Doctor Mark at 3:06 AM No comments:

Zulu! The first batch is finished!

Less than a week after I received my shipment of Old Glory 15's, I finished my first batch of 21 zulus. The sculpts are of married warriors in battle dress, which is fairly accurate for Rorke's Drift, where two of the three zulu regiments which attacked it were of married warriors. i chose to paint the shields brown and white, and I understand that older warriors typically carried whiter shields. I thought brown looked cooler, though, and in my book, cool trumps historical accuracy. I enjoy doing the historical research, but I don't kid myself as to why I'm painting these bad boys: they're toys for me to play with. 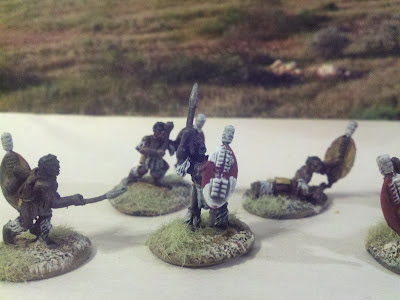 Next up is a platoon of twenty British soldiers. My ambition is to get 40 Zulus and 20 Brits painted. Then I'll move on to the terrain board and fight my first skirmish. Once I give the rules a test drive, it's on to do another 60 Zulus and 20 Brits. At that point, I think I'll be ready to assault Rorke's Drift. 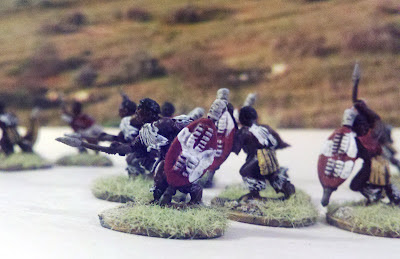 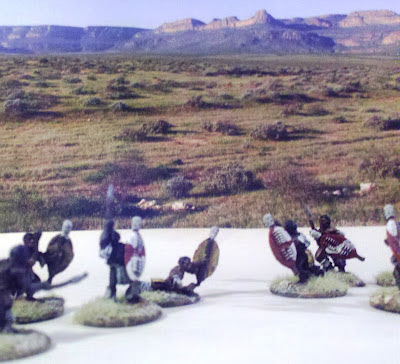 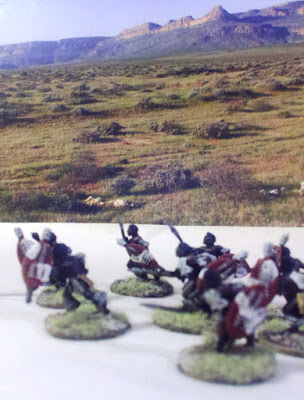 Posted by Mad Doctor Mark at 5:00 PM No comments:

My first batch consists of 46 Zulus and 21 British. As you can see, I glued the shields on, and most are holding well enough. Three snapped off in the early stages. I'm hoping that the spray primer I'm using is load-bearing. The shields look pretty good, after all, though some seem to be held with European-style straps rather than in the Zulu manner, held by the hand. I like these scuplts. They convey a sense of energy and they already look good en masse, even in their unpainted state. Click the photo below to see it enlarged.

Here are five British poses. The sand I used to texture the bases all came from my daughter's shoes. She accumulated so much every day at recess that I joked that I could build an army out of all she brought home. The prophesy is fulfilled...

Posted by Mad Doctor Mark at 2:17 PM No comments:

Rorke's Drift: Out of the Box (A review)

Well, no sooner had I finished up my last batch of 10mm medievals when I I found the Old Glory boxed set of Rorkes Drift waiting for me. I received it almost exactly two weeks after ordering, which is great considering times for casting and shipping. And this sucker is heavy... 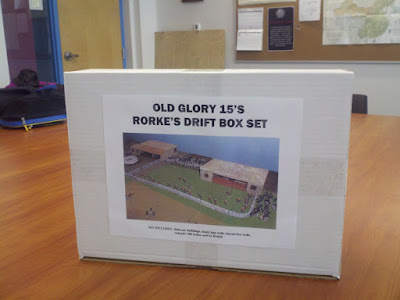 I considered the Warlord 28mm Rorkes Drift with plastic figures but realized that I would never have a table large enough to do it justice. Furthermore, it came with plastic figures and, well, let's just say that glue is my mortal enemy. Any plasic figures that I glued together would look like people who got rejected from a leper colony because they were not healthy enough. Furthermore, I paint 28mm figures at about a rate of a figure a day when I am working in batches. Doing a horde of Zulus would leave me a very old man before I was finished. Instead, I went for the Old Glory 15mm set, and I'm glad I did.
The set comes with a serviceable set of skirmish rules, but I think I will stick with Smooth and Rifled. Of greater value is the schematic of the compound. I figure a 6x4 table should be more than plenty to give the Zulus room to maneuver and for the British rifles to do their bloody work at range.
Here are the Zulus. 300 of 'em. I like the castings a lot, and what little flash there was could be picked off with a stout thumbnail. There are about a half-dozen poses (plus another two with rifles), making for a good variety within the warband. The pack you see below contains the shields. 300 of them. Remember what I said about glue? They all have to be fixed to the Zulu arms. There are pegs cast for guidance, but I had to file down or remove most of these, as they stood up too far. By the time I got the first 20 shields mounted on the Zulus, my fingers were so crusted with glue that I probably could have secured a space in that leper colony. 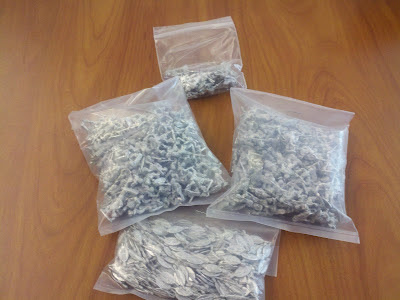 Now we come to the Brits. The bags are a lot lighter compared with those of the Zulus! The small pack has three officers, and I presume the larger one has 59 infantrymen. There are five infantry poses (standing firing, kneeling firing, at ready, loading, and what is either a charge or hip-firing). I have seen others quibble with the size and shape of the helmets, but they look good enough to me. 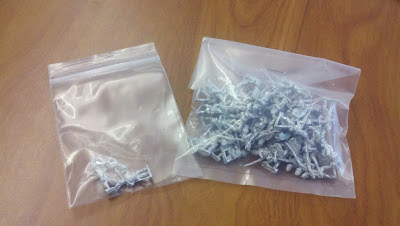 Next come mealy bags, biscuit boxes, and accessories like the stairs of the hospital. I was surprised to see that these were cast in metal, not resin. They are solid and will make good game accessories. Both bags and boxes are stacked very neatly. The RSM must have been a stickler for detail! 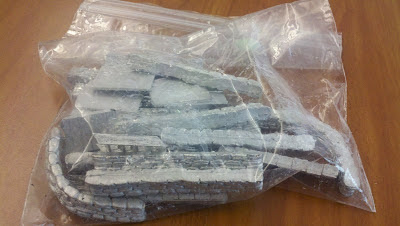 Finally, the buildings. The storehouse, the hospital, and even the tiny bakehouse are all represented. These are cast in resin and have removable roofs. I was glad of this, since part of the fun of Rorkes Drift is the desperate fighting inside the hospital. The buildings are nicely scaled with low roofs on which to perch figures. The hospital does not have a second storey in which to station figures. The stairs go up to a tiny loft door. The floor plans inside are simple, and perhaps they could be broken up further with dividers if I were so inclined (though I'm not likely to be!). The doors can be removed (I won't) and some of the open windows have flash in them. I realize that this is part of the casting process that cannot be avoided, but I have yet to find a clean and elegant way to remove it. Also included is the large kraal and the last redoubt. I have no doubt that these are to scale, but as I am mounting my troops on pennies, I suspect they will both get cramped when occupied by troops. 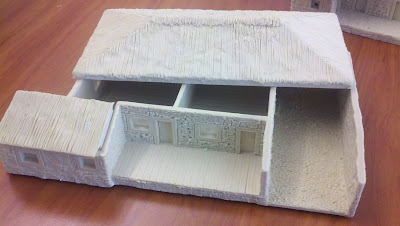 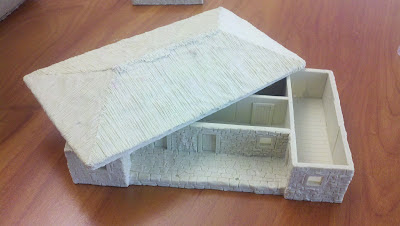 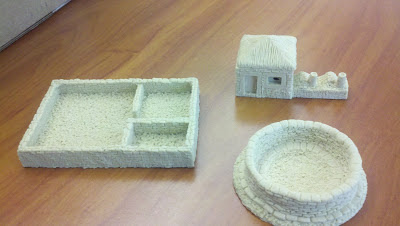 Overall, I'm very happy with the value and quality of the boxed set. I've never tried a skirmish-level game with 15mm before, but I think this is the right scale for this game. I'd never have the time or patience to do justice to 300 28mm zulus!
Now to watch the movies again for inspiration, and then off to fetch my glue and paints.
Posted by Mad Doctor Mark at 2:14 AM 1 comment:

Well, I've finally seen the movie Zulu one too many times. My next project will be a Rorke's Drift setup in 15mm. I've ordered the minis from Old Glory and hope they will be here soon. The period has interested me ever since I was the film. I like the idea of two aggressive, sophisticated armies, both at the top of their game, with a huge technological gap between them and a gross disparity in numbers. How can you fail to have fun, as long as you are not using real assegai and Martini-Henry's?
I may look at the Black Powder rules as I get in the period and offer the Zulus a chance to wet their spears at Isandlwana, but for my early games I plan to use the Zulu War supplement for Dadie e Piombo's Smooth and Rifled game. A few years ago, I might have gone with The Sword and the Flame, but S&R seems to be state of the art, fast-paced, and fun. I hope to have the full game ready by summer time. I'll post regular updates between now and then. 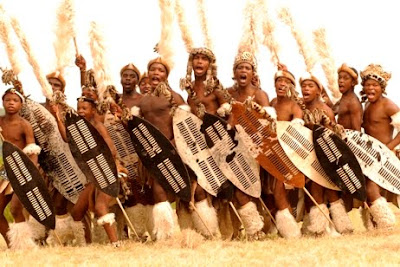 Now to clear the benches by completing my 10mm medievals...
Posted by Mad Doctor Mark at 8:22 AM No comments: