Our friends the Portuguese 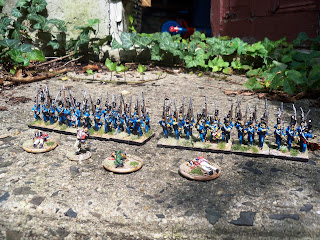 Most of the time, somewhere between 20% and 40% of Wellington's army in the Peninsula consisted of Portuguese allies.  Defeated handily by the French in 1808, the Portuguese bounced back with British arms, training and money to become one of the most effective small military powers of the Napoleonic period.  There seem to be a wide variety of descriptions of their uniforms in the post-1808 period.  Some sources describe white trousers, others describe blue or grey.  I've found descriptions of the shade of blue of the uniform coats anywhere between "pale sky blue" and "dark midnight blue."  I chose a happy medium, and went with the blue trousers since they looked smart.

If you look closely, you'll see that these fellows were originally Old Glory 1809 Peninsular British.  I filed off the belly lace as well as I could.  They'll do quite nicely.  Once I attach flags to these battalions, they'll be ready for the battlefield, awaiting another battalion of line and one of cacadores.

These units are marching through some British casualties by Perry.As with anything done by the Perry brothers, they come close to being show stoppers. 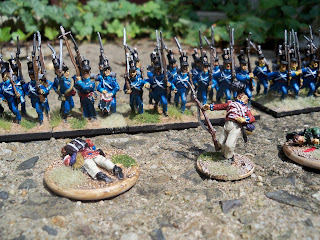 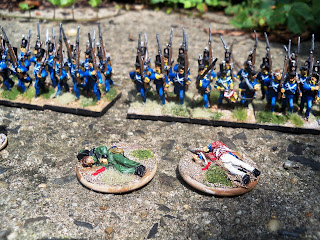 Posted by Mad Doctor Mark at 11:12 AM No comments: 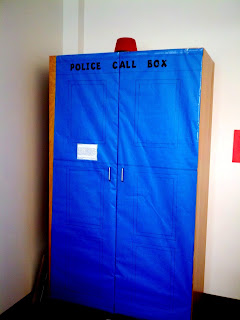 I love my classroom.  It's large, well-lit, and is centered around a large oval table that makes for good discussions.  If I had one complaint, it would be the lack of storage space.  When we moved into the new building, I was assigned no more than one bookcase and one large storage cabinet. So, when offered the chance to decorate, I grabbed construction paper and glue and...dang!  This large box just materialized.  I hope it has room for all of my books.

Note that I lack a light for the top, so I used my fez.  Fezzes are cool. 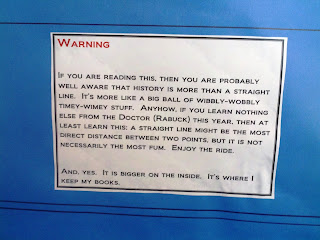 Posted by Mad Doctor Mark at 4:21 AM No comments: 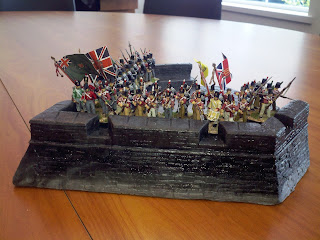 The 28mm bastion I ordered from Magister Militum arrived today.  It's a gorgeous piece of terrain, from the Battlegroubd line.  It's meant to be a fort guarding a harbor in the Caribbean, but it can also work as a fortification in my Napoleonic battlefields.  As you can see here, it can easily hold two battalions of infantry, or four batteries of guns, with room left over for a shuffleboard court.  The marbled grey resin looks good on its own, but I will probably be painting and drybrushing it to get rid of the shine and to make the details pop out.
Posted by Mad Doctor Mark at 5:23 AM No comments:

More progress on the British

28mm troops by their nature are more time-consuming to paint than smaller scales, and I'm feeling
bad that I can't work to my normal breakneck pace.  However, forcing myself to slow down has made me focus on both research and technique, two areas where it can never hurt to improve.  Today, I finished up my first Divisional commander, Sir Thomas Picton.  Picton will forever be memorialized as the dude who rode to Waterloo with civilian clothes and carrying an umbrella.  Since my Brits are kitted out for the Peninsula, this model is slightly inaccurate, to which I give my usual reply: piss off.  it's fun.  Anyhow, I feel bad for Sir Thomas.  He served ably as one of Wellington's lieutenants, had a sordid career as a governor in the Caribbean, and his birth is quite literally the stuff of legends. So it's a shame really that he gets remembered as the umbrella dude who caught a bullet in his top hat.  Anyhow, here he is, being informed by a sergeant that he should probably get out of the path of the dragoon charge taking shape behind him.  Both figures are by Perry. 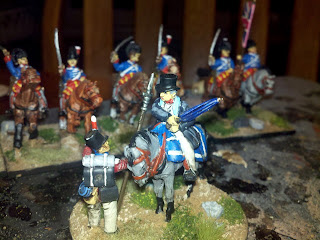 And here are the light dragoons.  I painted them up as the 16th, which served long and ably in Portugal and Spain, though they will stand in for many units.  I did the saddle blanket in red, which is the unit's facing color.  All illustrations I've seen do the blankets in blue, but I can't find documentation that certifies that.  The red is plausible, and it adds some nice contrast to the figure.  These guys are Old Glory. 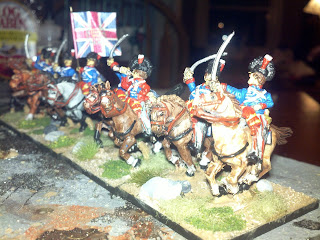 Posted by Mad Doctor Mark at 6:49 PM No comments: 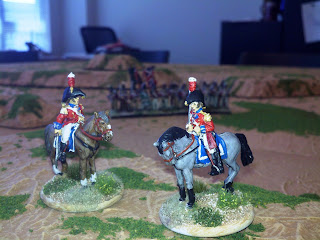 Some officers to lead my British infantry into battle.

Posted by Mad Doctor Mark at 3:56 PM No comments:

First go at a fourth scale

I've always had a soft spot for the Napoleonic period.  For me, it is the sine qua non of historical wargaming. With its combination of colorful uniforms, outsized personalities, and many different troop types, the period represents the best that our hobby has to offer.  So it is no surprise that one of my first wargame armies, back when I was still in my teens, was 15mm Austrians.  Then I had to paint a French army to fight them.  They sat unused all through college and grad school, and when I took up the hobby again after grad school, my playing space was seriously limited, so 6mm armies it was (this time French and British).  My eyes had a hard time focusing at that scale, so I moved up to 10mm forces (going Austrian, British, and French, with some Bavarian allies just to be sure).  I finally feel confident enough as a painter to work in 28mm, so I sold off all of my old armies and started fresh this summer.  I'm starting with British, and I'll move on to French and their allies when I get bored of red jackets.

I finished six battalions, and today I made them parade in my back yard.  Next up are one more unit of light infantry (so I can have a complete Light Brigade), some officers, and a few sections of artillery.

I got over my aversion to plastics, and most of the figures you see below are Perrys (the light infantry on the right are Victrix).  There are some minor errors that I may or may not correct, mainly due to brain farts rather than a lack of research.  Note the red-over-white plumes of the unit in the left rear, and the reversed colors on the light infantry.  I may correct these errors later, or I may invent clever stories to explain the idiosyncrasies ("Can't tell your left from your right, major?" barked the Brigadeer.  "Well, until I say otherwise, you will march as you are while the every sergeant in the army laughs at your foolishness!"). 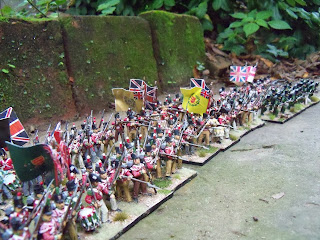 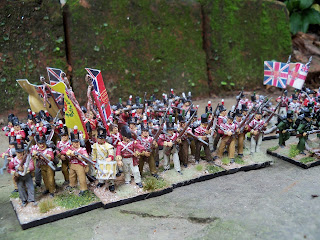 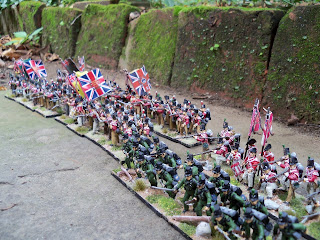 Posted by Mad Doctor Mark at 8:48 AM No comments: