In this day and age of shrill pundits and polarized political dialectic, one needs an objective fact-checking system more than ever. So allow me to get my plug in for politifact.

Our last bastion of defense against truthiness (pace, Colbert).

OK, I've been a fan of sim games ever since the first SimCity. I was hooked on all versions of Civilization, and I've spent more hours on the Sims than I care to mention. My latest obsessive sim game is Evony, which has the advantage of being free and browser-based. It's pretty typical of the genre. In many ways, it hearkens back to early versions of Civilization and Age of Empires. A lot of resource management, tedious maintenance of cities, and large-scale lopsided combat. Good times. Below is a screenshot typical of the game. 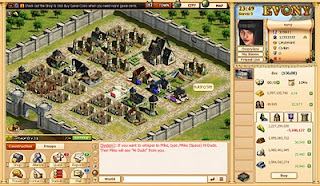 Now I must confess that it took a long time to disover this game. To be honest, I was more than a little turned off by the advertising, which promised...shall we say, a different sort of gaming experience. 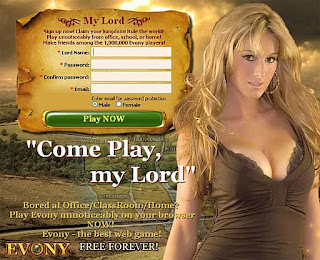 I mean, really. The sex appeal of shifting around troops, gold, and resources is limited at best, but the adverts to this game promise tons of jiggle. I'm sure this relentless ad camapign drew in thousands of thirteen year old boys, but it was not until the ads appeared which made it clear that the game was a sim did I join up. I did learn something valuable, though.

Thirteen year old boys suck at sim games. Like shooting fish in a barrel...
Posted by Mad Doctor Mark at 5:29 PM No comments: