Happy Christmas!
Thanks for reading, and may peace reign on earth in 2013

Posted by Mad Doctor Mark at 2:46 AM No comments:

Just sit right back, and you'll hear a tale 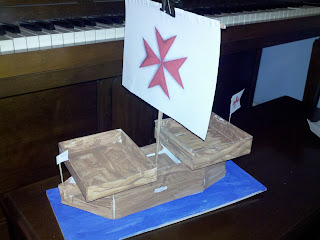 My daughter, who is in second grade, had an assignment to build a replica of one of Columbus' ships.  Daddy was in a quandary: how much help should a professional historian/miniatures gamer give to his daughter? Well the answer is: apparently a lot less than some of the other dads.  But we're proud of our little Santa Maria.  My daughter drew up blueprints, and I cut foamcore board to her specifications.  We then glued two box lids to represent the forecastle and poop deck (a lot of humor to be found in that term).  She painted with some of my craft-store acrylics, printed out a sail with a  cross of Malta, added some labels to identify parts of the ship (she is the only kid in second grade who can tell you WHY 'port' and 'starboard' are the terms for left and right on a ship), and voila!
Posted by Mad Doctor Mark at 1:00 AM 2 comments: 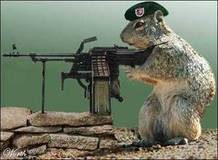 So, I'm beginning a new project: 15mm Post Roman Britons and Saxons.  Gonna get my Arthur on.  So, I spent an hour prepping my first Roman-British Cavalry and Saxon infantry, gluing little shields down and mounting them on popsicle sticks. The minis are from Splintered Light.  They look good and there is shockingly little flash on them.

Anyhow, I went out very early this morning to prime them, so as not to disturb the neighbors with spray paint fumes.  I left them out to dry for an hour before I brought them back in the house.

When I went back out again, the troops were all in disarray.  Most had been ripped from their popsicle stick sprues.  Many were scattered on the ground (fortunately, I had raked the day before, or else my troops would have been found in the spring, resembling the bog man).  A guilty looking squirrel chattered down at me from a tree.

Stupid Saxon Squirrels!
Posted by Mad Doctor Mark at 5:59 AM No comments:

My Mogadishu setup has been on the table for several days now with the helicopters on flight stands.  Every time someone jostled the table and knocked one of the birds over, all the students would cheerily yell "Black Hawk Down!"  Now that we've finally reached the point in the narrative where the helicopters are actually shot down, there will be no more yelling.

And I know that it should be "Huey Down!".  But hey, at $3 a pop, they look pretty good.  And they still sharpen pencils. 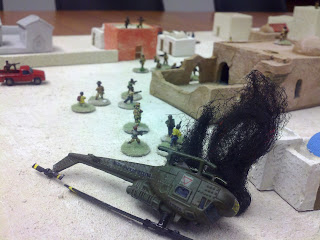 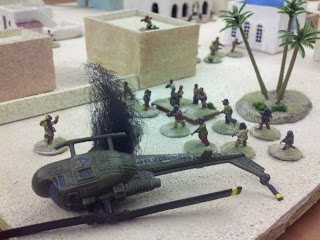 Posted by Mad Doctor Mark at 8:25 AM No comments:

In addition to my Military History class, I teach two sections of our standard Freshman history course, which focuses on Revolutions.  We spend the year on two case studies: France and Russia.  We are nearing the end of our French Revolution unit.  Napoleon has become First Consul and has decisively beaten the Austrians at Marengo.  While our course focuses on the political and social reforms of the Bonapartist regime, how can I resist talking about the military side of things?

While my main seminar table has been given over to Black Hawk Down, I have set up this hypothetical Napoleonic engagement in the corner of my room.  French troops are in the foreground, Austrians in the rear.  The Austrians have gone for something out of Frederick the Great's playbook: cavalry on the flanks, with a long line of infantry with artillery interspersed among regiments for support.  A column of Landwehr marches to relieve pressure on the Austrian left.  In short, the Austrians are deliberate dupes for Napoleon.  The French have a strong center with two large assault columns formed.  Bavarian allies are on the French left (allowing me to talk about the Empire and spread of nationalism and revolutionary ideas), while a strong reserve of dragoons and cuirassiers await their chance to exploit any breakthrough. 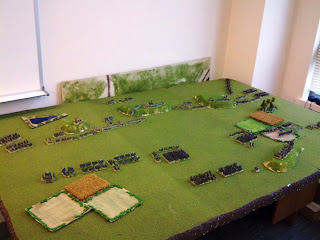 Uh-oh!  The Bavarians got caught by cavalry in the open.  They quickly form square in response. 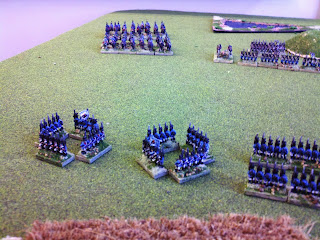 The Austrian line waits for the assault columns to appear. 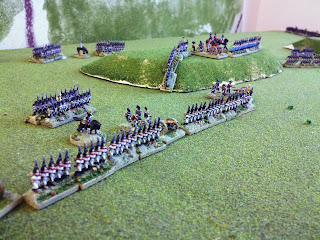 Napoleon assembles his heavy guns into a grand battery to soften the Austrian center up. 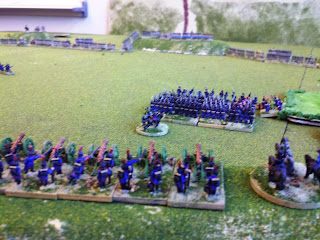 Austrian hopes lie in their strong left, with dragoons and a small infantry division hoping to hold out until the Landwehr can provide the weight of numbers. 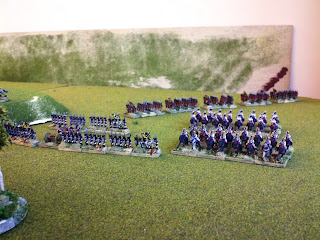 Posted by Mad Doctor Mark at 11:23 AM No comments:

Bring out the toys. Rabuck is going to teach.

The last unit in my military history class is modern asymmetrical warfare.  As a case study, we read Mark Bowden's Black Hawk Down, still available in the serial form in which it was originally published in the Philadelphia Inquirer.  Because the operation described is so complex, and because the reading is so episodic, I decided to lay out the following game table, so we could represent some of the action as it occurred.  And yeah, we'll be watching the movie as Christmas draws near and attention spans go down the chimney.

The scene above is the plan as conceived.  The D-Boys have yet to drop in, but the Rangers are about to quick-rope into position (only two of the four chalk groups are represented on the table).  One student correctly pointed out that one of the helicopters was out of position, and it should be a block to the north.  We moved it.

Then we placed the Rangers and Delta team into position.  Rumbling in from the south are three Humvees representing the ground convoy.  Still to come: mobs of militia and roadblocks galore.

Finally, a student pointed out that the helicopters are not Blackhawks, but rather Vietnam-era Hueys.  I explained that gamers are cheap and often use substitutes when they don't feel like chucking down fifteen bucks for a period-appropriate chopper.
Posted by Mad Doctor Mark at 6:14 PM No comments: