First round of scurvy sea dogs

Five 28mm Old Glory pirates to inhabit my brig. I really like how these came out, and they were very easy to paint.  I think I'm getting better at doing faces. 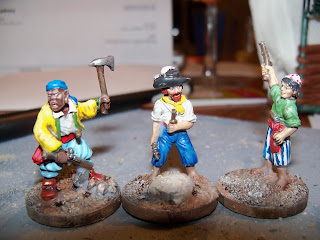 Posted by Mad Doctor Mark at 4:29 PM No comments:

My next project is underway: pirates!  I decided it was time to work in 28mm again, and the golden age of piracy seemed fun and colorful.  Plus, the chance to do some really spectacular terrain (like here and here) appealed to me. Anyhow, I decided to kick off this project with a scratch-built pirate ship using the plans created by Gary Chalk in Wargames Illustrated #38 (March, 1999).  They are no longer on the WI website, but they have been posted to the Pirate Gaming Yahoo Group.

Instead of balsa, I used foamcore as a base.  It's slightly thicker but a heckuva lot easier to work with.  I used matte board (generously donated by my school's art department) for the hull and bulkheads.  This is thicker than Chalk suggests, and it was not easy to cut precisely, but I think the added strength is a plus. 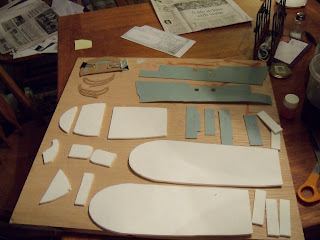 All of the pieces cut and laid out.  This took the better part of two hours!  And two exacto blades. 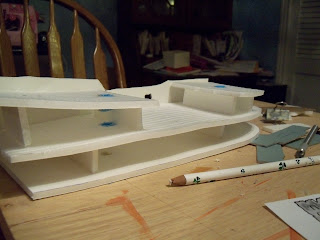 The decks assembled.  Because foamcore is slightly thicker than the 4mm balsa that Chalk used, I made my deck spacers slightly narrower. To my dismay, the main deck buckled once it was glued in place.  Fortunately, gluing the hull on gave me the opportunity to straighten it out with no subsequent problems. 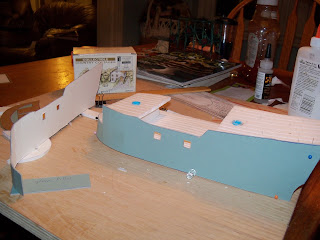 Putting the hull on.  The matte board could be pretty much shaped to the curves of the hull beforehand, making fastening it in place much easier than I feared it would be. 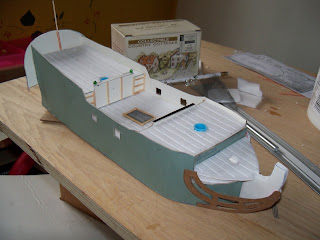 Flat toothpicks provided woodwork on the bulkheads.  I used cut up magic marker tubes with an interior diameter of .25" as supports for the masts.  This will enable me to take them down for transport.  I used old cereal box for the bow ornament.  Even with the thinner material, it was a bear to cut. However, the plans were so precise that the went into lace almost as if the ship had been made out of molded plastic. 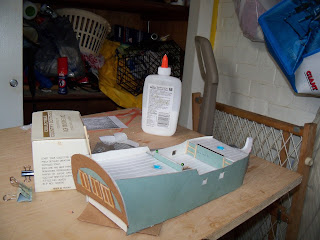 The view from the stern.  It's not clear from the plans, but the stern requires two pieces cut from the template.  One has the windows cut out of it, creating a inset area around the galley.  It adds just the right piratey touch. 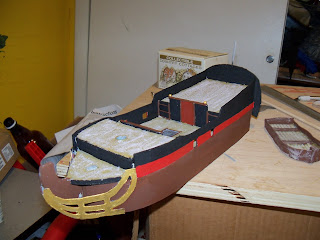 And here's the painted hull.  I made a little dinghy, too. The dinghy took about an hour to make, including paint.  The whole ship took me from Saturday morning to Tuesday evening, working no more than an hour or two a day.  Honestly, cutting out the pieces was the hard part.

I screwed up the deck by peeling the outer paper off the foamcore.  I've had issues with buckling when I've painted foamcore in the past.  I thought that I could get away with using a light dusting of spray primer before applying the base coat of paint.  Wrong.  Never ever use any kind of spray paint on foam.  Ever.  My decks look more like gravel than planks now.  The drybrushing hides some of the damage, but I am still kicking myself. 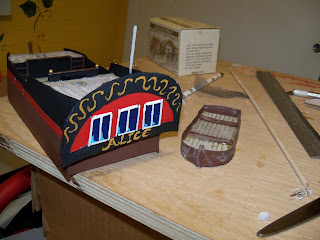 The view from the stern.  I named her the Alice, after my cat.  I have two kids, and they'll just have to wait to have boats named after them. Or they can make them themselves.  I'm terrible at any kind of scratch building, but I'm pretty happy with how the Alice turned out. I think she'll make a fine addition to my wargaming table.

Next up: some pirate minis and a Vauban fort!

Posted by Mad Doctor Mark at 4:33 PM No comments:

Too Much Saxon Violence in the Dark Ages

You know, I got an award for being the one millionth medievalist to use the joke in the title.  Sorry 'bout inflicting it on you.

Anyhow, as a mini-project, I decided to paint up some Saxons and Romano-British troops for some Arthurian rumbles.  I still have a few units of Saxons (including the probably apocryphal war dogs) and generic archers to paint up, but the mass of them is complete.  I have not yet decided if I'm going to use Impetus, Hail Caesar, or Dux Bellorum to fight with them.  I was thinking of gaming the same scenario three times, once with each set of rules. Could be a fun experiment. 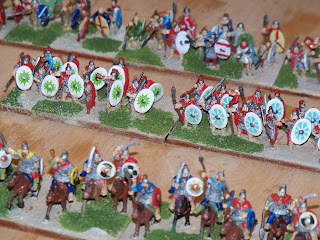 Posted by Mad Doctor Mark at 4:09 PM No comments: