They're not miniatures. They're teaching aids.

While my Military History course has clamored for another round of wargames, I will only tantalize them with dioramas made up of my miniatures which I will use to illustrate aspects of the texts we are reading.  Below is a 10mm WWII setup I am using to illustrate the fighting that took place in the Normandy bocage in our WWII unit.  An advancing American company, with some armor in support, is about to discover a world of hurt. 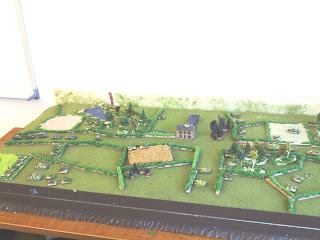 Battle of Germantown 2012 The Conclusion

The game is over, and it looks like history repeated itself.  Last year's simulation followed the course of the battle in terms of where the engagements took place.  This year's fight reflected different tactical choices, but the outcome more closely reflected the historical battle.  A few local American successes were negated once the British got their act together and destroyed the prongs of the Colonial attack.  I'm glad we played one more day.  It led to a decisive outcome, and the papers the students will write as part of their debriefing will be able to take the consequences of their choices fully into account.

The Black Powder rules worked well, and the raw beginners were running turns themselves towards the end.    I'm glad I was there to referee, though, and I think an umpire would be a great addition even when experienced players are engaged to make snap calls and move things along.

Here on the eastern side of the battlefield, one Continental brigade entirely disintegrated on the last turn.  After a blunder, a beleaguered US regiment found itself surrounded on three sides and went down in a blaze of glory.  Or musketballs.  A militia brigade in support took some early hits and never fully rejoined the fight. 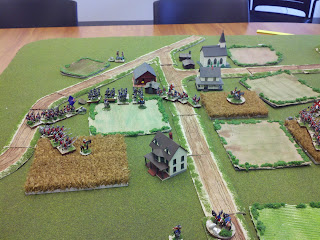 On the west side, the British troops formed an angle and warded off any American attacks.  one militia brigade (the "Mel Gibsons") in the center were never able to bring their muskets to bear, stalling out in the center.  The girls who led the attacks on the flanks did a lot of damage to their British counterparts, but the red line stood firm, having redeployed the British elites from one side of the battlefield to the other.

All in all, what a great way to apply what we've learned.  We lost a few days to Hurricane Sandy, but spirits were high on both sides after this lame effort to engage in my hobby and get paid for it! 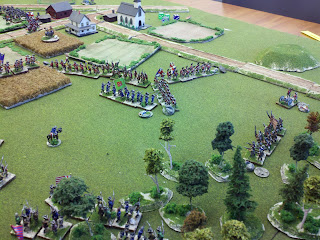 Battle of Germantown 2012 The (Almost) Endgame

This was going to be my last session around the game table.  really, it was.  But only in the last two turns did the players finally get their troops into a position to attack, and the units started coming off the table in earnest.  Germantown Academy students are pretty competitive under most circumstances, and my class has a lot of the best kind of student-athlete: those kids who bring the best lessons off the field into everything they do.  They insisted that we play one more class period, so they can better know which side won.  Who am I to argue?

The Americans had the advantage in the early go, with the surge that took the Chew House, but the British outmaneuvered the Americans on the west flank, pretty much giving themselves the initiative for the next few turns and forcing the Yanks to play their game.  Troop quality started to tell as the maneuver set up local advantages.  By this stage late in the game, everyone was pretty much into it, and when Angela saved her artillery with a 1 in 6 break test check, the whole table cheered.  Good times. 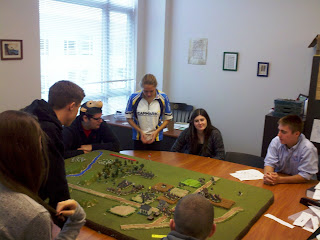 In these late stages, there are two battles going on.  The one around the Chew House looked like it was going to go the American way, but a blunder sent two regiments into a hailstorm of musketry.  Now the Brits hold the advantage in the area. On the other flank, brigades take turns getting into trouble, but the students are getting the hang of pulling back weak units and replacing them with fresh troops. 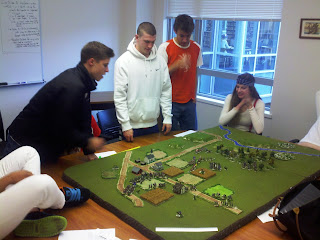 Battle of Germantown 2012 Neither rain nor snow...but hurricanes are another story.

The British abandon the Chew House, but pounce upon an isolated American brigade, practically surrounding it and pouring fire into the unlucky regiments.  Most brigades on both sides have been battered, and many are rapidly approaching the tipping point.

Christiaan: I am going to wipe you off the map, Angela!

Angela: You really need to relax. 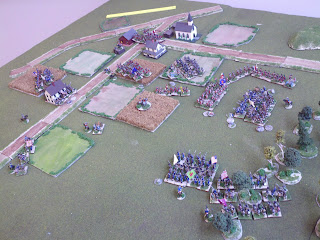