I've adapted good old Squad Leader/Cross of Iron for 20mm tabletop wargaming. I'm testing out the rules with the wargames club for which I am faculty adviser. With its turn-based mechanics, the rules seem quaint, but the basics are easy to explain, gameplay is fast, and so far it has been fun. 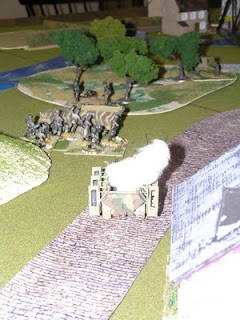 I'm particularly proud of the terrain. I'm really starting to get into the modeling aspects of the hobby. With a hot-wire styrofoam cutter, a color printer, and some scratch-built houses, hedges, and fields, this setup beats the hell out of the pold "pieces of felt" terrain we had been using.

At right, German Pioneers scramble for cover behind their one remaining halftrack after an American AT gun scrapped the second one. Can the Yanks hold off the Panzers and Panzergranadiers long enough, until their own armored and para reinforcements arrive? 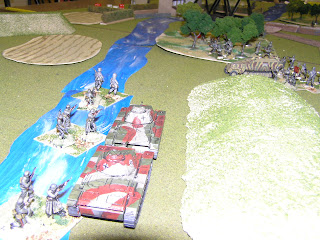 German infantry, supported by two PZ III's, try to flank the American position by fording the shallow river. If they succeed, the entire Salerno bridgehead might be in jeopardy... 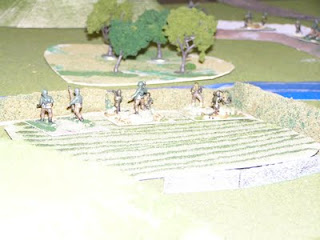 An American platoon considers crossing the stream to reinforce the beleaugured Yank outpost. Deciding to hold their position behind a hedge, the Americans watch forlornly as their friends are overrun.
Posted by Mad Doctor Mark at 9:38 AM No comments: