I began my gaming career with fantasy games: SPI's War of the Ring in 1979 (with the wicked-cool Gondor and Sauron minigames!) and the blue-box Basic Dungeons and Dragons the following year. One could argue that it was all downhill from there. Yet despite my love of the fantasy genre, I never really got into fantasy miniatures gaming, except as a supplement for D+D.  SO at long last, I shrugged my shoulders and said "Why the heck not"? I have a set of medieval rules that I think will work really well with fantasy mass combat (based loosely off of Hail, Caesar!, but I also might give the fantasy version of Impetus a whirl) and an Old Glory Army membership, so off we go!

Posted by Mad Doctor Mark at 12:12 PM No comments:

Last night I played my first game of Blucher at my friend Joe's house.  We were both intrigued by the promise of this new set of rules: corps-level commands that are fast, fun, and playable.  It was the inagural outing for my 10mm armies, French and Russians from Old Glory.  We used only a tiny fraction of Joe's table for the game. Since we are just learning the rules, we decided to forgo the Scharnhorst campaign setup, although they look like a lot of fun.

All in all, a fun game. Maneuver was a bit clumsier than we were used to, but that gives a good feel for the command level the game simulates. A commander who orders brigades and divisions forward is painting with a much broader brush than a tactical commander. Joe and I doubtless overlooked some nuances of the rules, but we worked things through easily enough and came away thinking that the rules were elegant and clear.

I learned a lot from my mistakes. Lesson one: Russians have good artillery and terrible skirmish ability. Thus, they should engage the french either at very long or very short range. Lesson two: While melee combat may not be decisive (pace, sad little dragoon unit!), it allows you to weaken an enemy position if you have the reserves to exploit it later.  When Joe made his firing line, I should have ignored one turn of close range volley fire and just plowed right in.  I would have taken my lumps, but the ability to pick targets in the assault would have greatly weakened Joe's position, and I had two fresh units with which I could have exploited the results.  Lesson three: The side that keeps units in reserve the longest has a big advantage.  Instead of holding my cossacks as second-rate battle cavalry, it is worth considering using them to race towards still-concealed units.

Looking forward to another game, with Scharnhorst thrown in to boot!

Posted by Mad Doctor Mark at 5:09 AM No comments:


Posted by Mad Doctor Mark at 9:24 AM No comments:

Posted by Mad Doctor Mark at 12:32 PM No comments:

Young Generals Have At It

My military history class has moved on from the American War for Independence to the wars of Napoleon. The way I structure our case studies, I show the students a period film (in this case, Waterloo), we do secondary readings (some of them excerpts from Atkins' Waterloo Companion), then we play a simulation game while the students write a mini-research essay critiquing some aspect of the film.  Today, we began our scaled down version of Waterloo with my 28's.  The buildings may look like Spanish, but don't be fooled. I razed Le Haye Sainte and Hougumont, as I don't want to have to deal with fortification rules with novice players.  The rules themselves are a slightly modified Black Powder.  Since they are the same rules as we used for the AWI, the kids were ready to run once they learned how to form square. 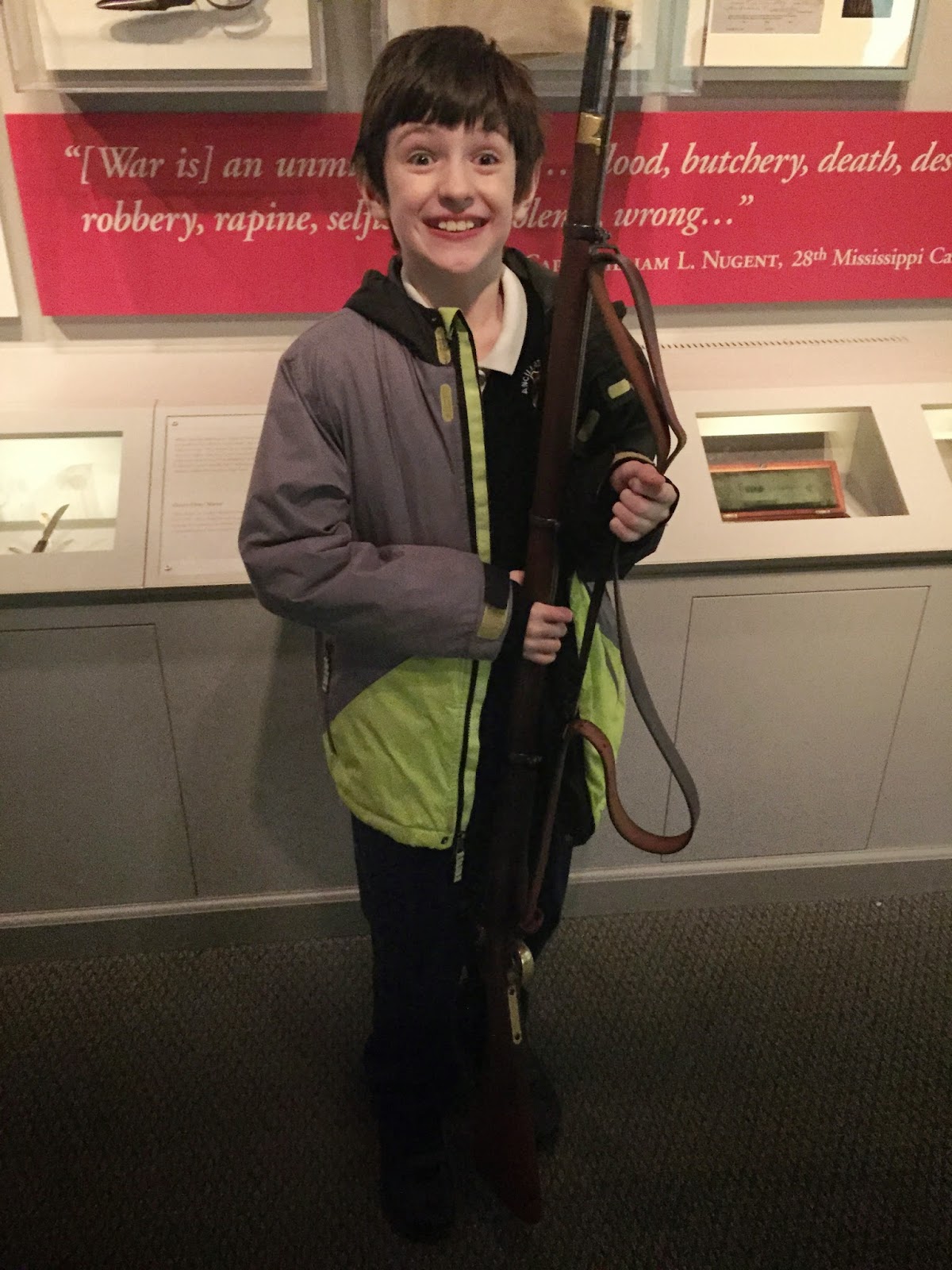 My son went on a trip to the Civil War Museum in Harrisburg today.  He's never been one for any of my nerdy games, but from the look in his eyes, he might very well catch the re-enactment bug...
Posted by Mad Doctor Mark at 11:12 AM No comments: 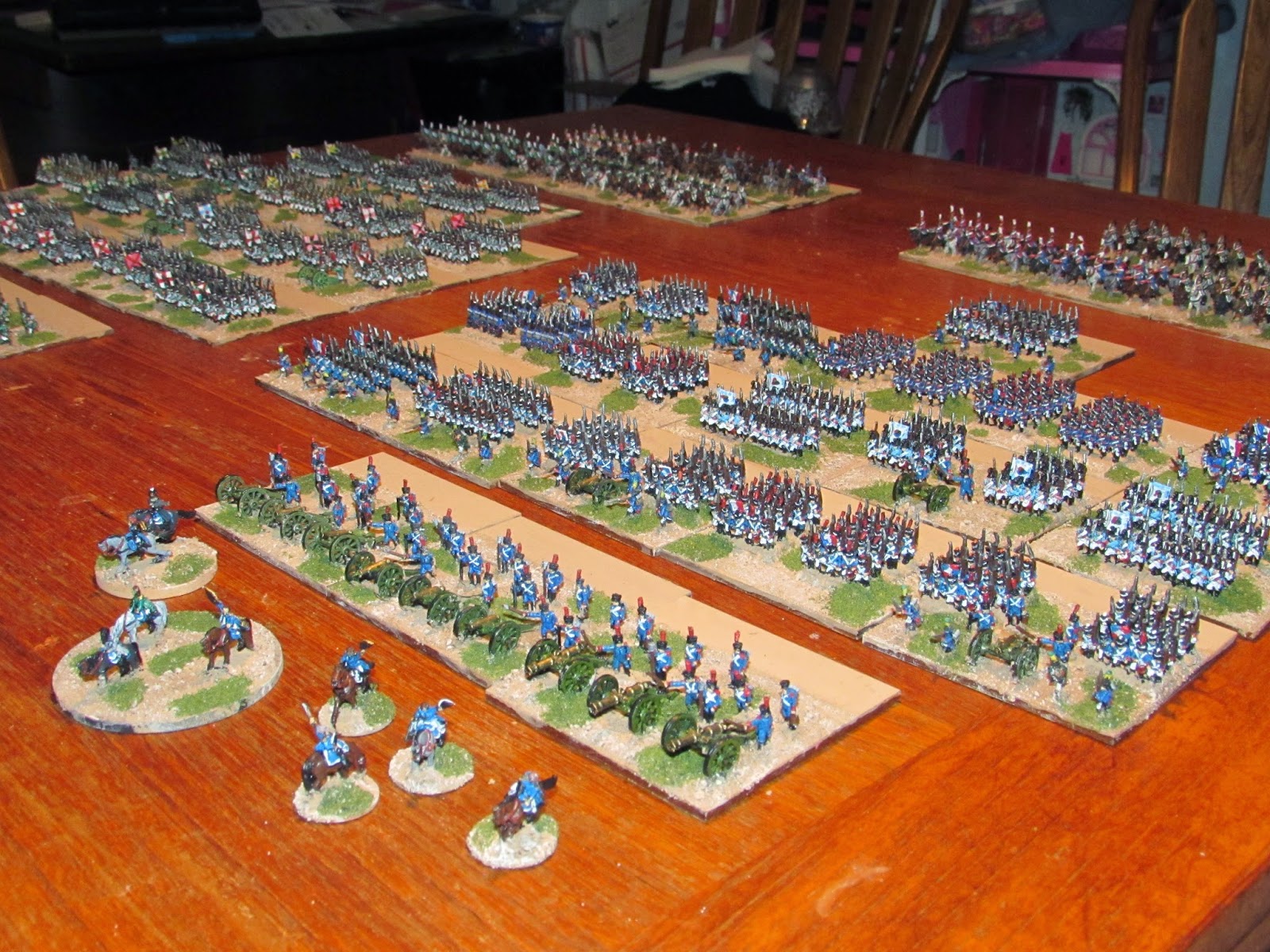 Last year, I got the hankering to do Napoleonics on a scale that allowed me to command armies rather than divisions.  I love my 28mm figures, and I enjoy both Black Powder and the quick-play house rules we use in the Ambler Gamers.  But I wanted the chance to say "Order the Fourth Corps forward!" and "Commit the Guard!" and to refight the epic battles of the period. So I did what any good wargamer would do: commit to gaming in a new scale and search for a good set of rules.

For a long time, I considered Volley and Bayonet, which was exactly the scale I desired. However, the command system left much to be desired. My test for a good set of rules is if it forces players to worry about the kind of issues that commanders at that level  worried about.

I heard about Sam Mustafa's upcoming Blucher rules, and they seemed to fit the bill perfectly. After months of breathless anticipation, the rules were released in February. Based on two read-throughs, I believe I made the right choice. I can't wait to take these rules for a test drive.

In anticipation of Blucher's release, I started painting up 10mm Russian and French armies on 3" square bases. You can see that I left a 3/4" strip at the back of each base clear for unit labels, which will allow me to keep track of stats and elan losses without having to resort to a roster.  Units have skirmishers deployed and/or artillery attached to signify units with those characteristics.  All other information will be on the labels (you can see a few prototypes fixed on with a glue-stick). 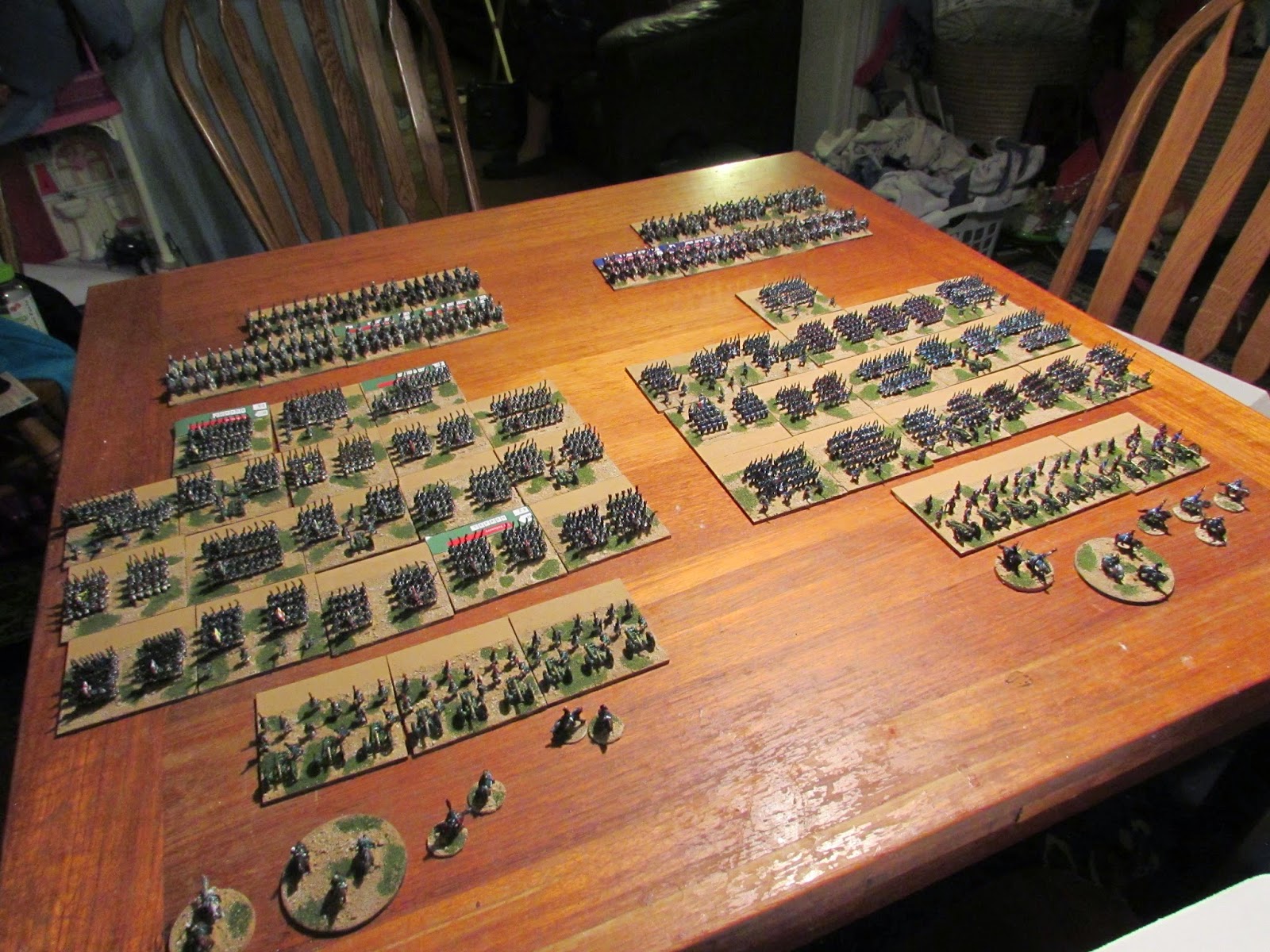 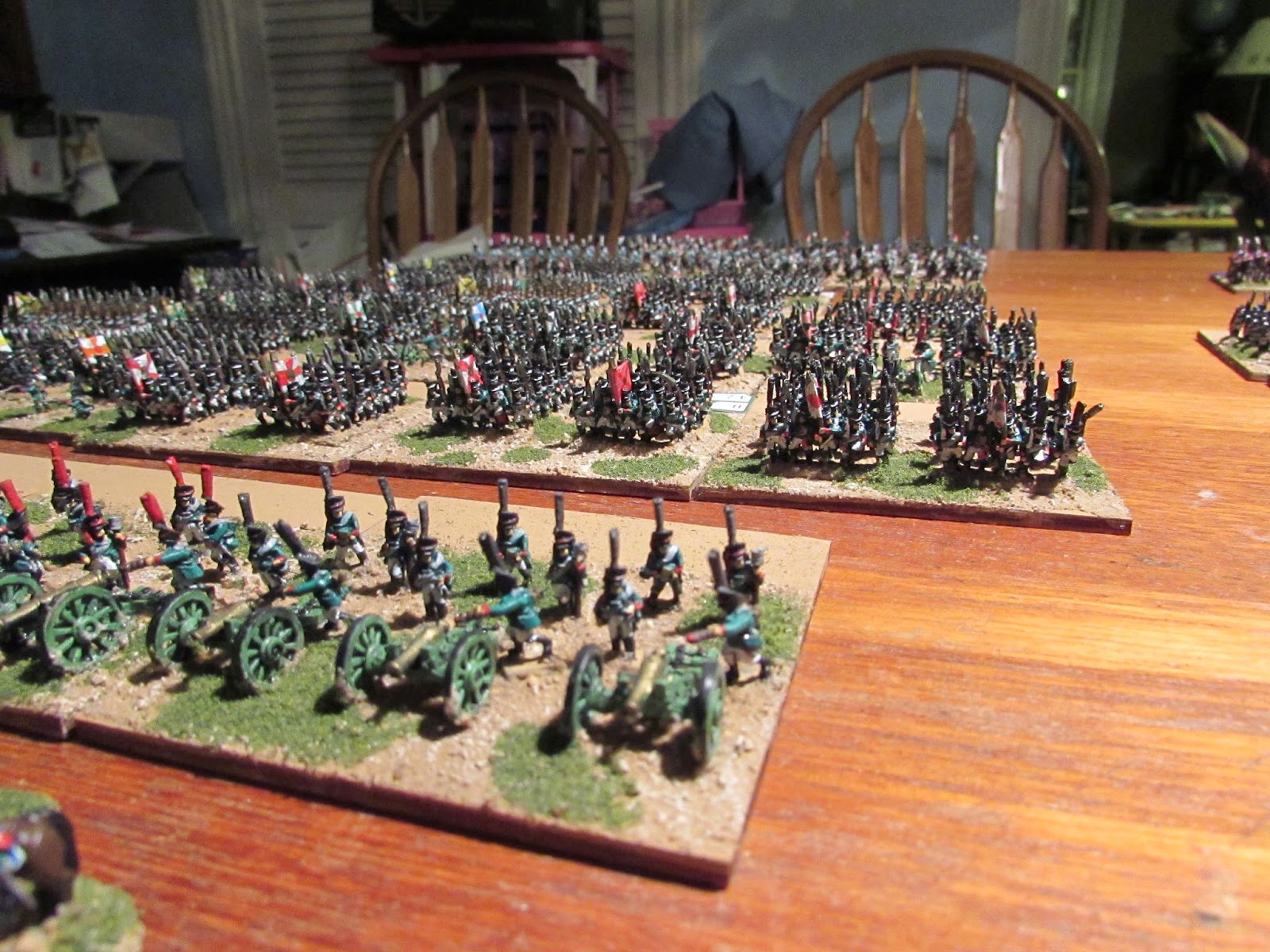 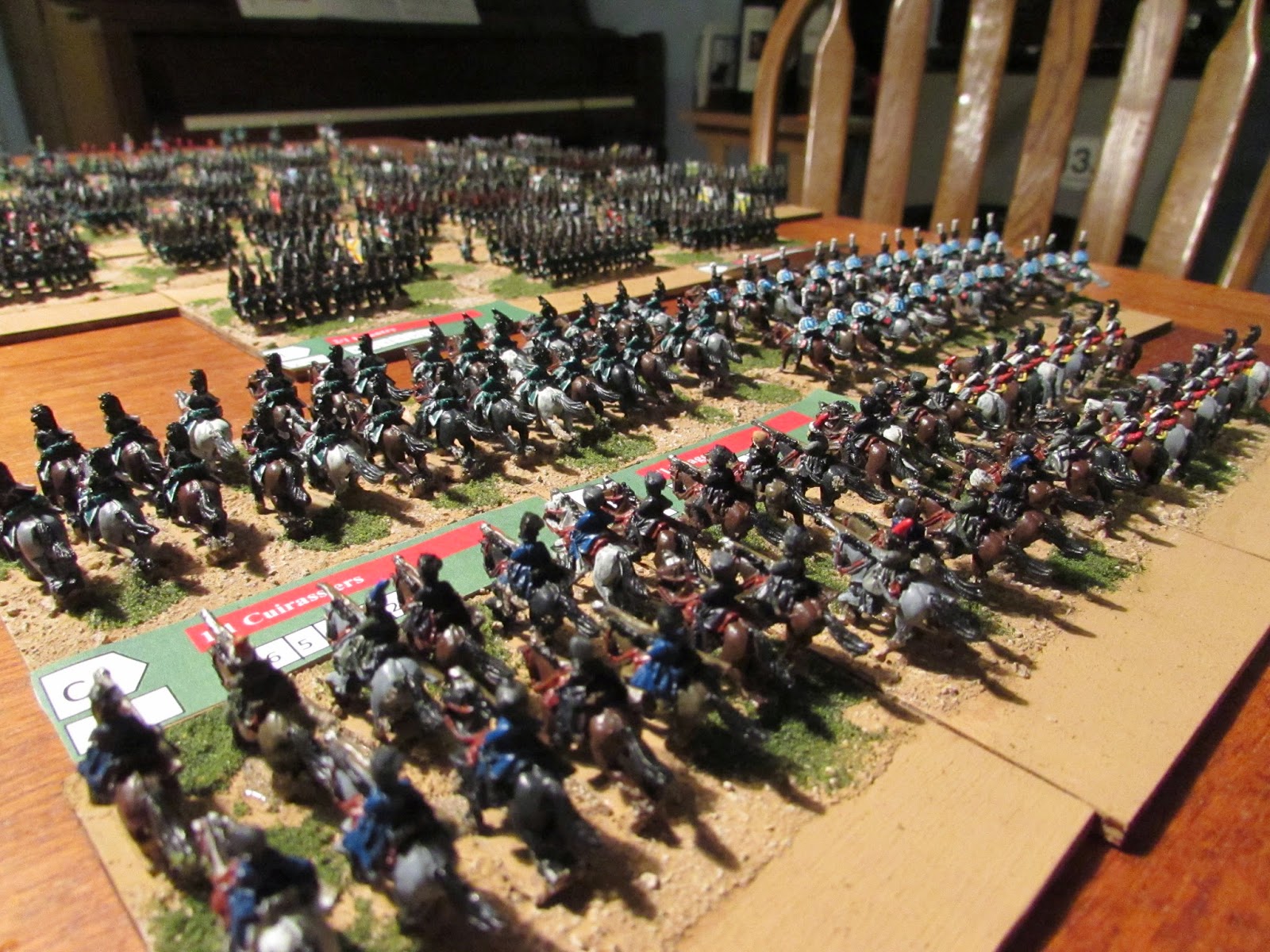 Posted by Mad Doctor Mark at 4:54 AM No comments: