When I do a classroom simulation, I need to use rules that can be taught quickly to gaming novices, some with little to no interest in military history. I need rules to keep about ten people engaged around a gaming table, and a game that can be stopped at a definitive point and picked up again a few days later.  For Crusaders!, I cribbed the activation system from the Ambler Gamers. The combat system has more than a whiff of Hail Caesar, and the morale system was inspired by Johnny Reb.  Hopefully, it can be explained on the chart below... 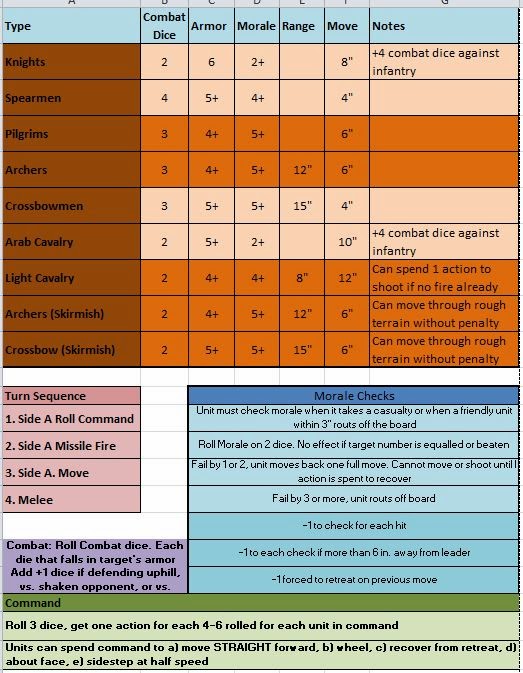 Posted by Mad Doctor Mark at 12:26 PM No comments:

My summer project was to get two small armies together from the time of the First Crusade.  We're almost done with September, but my class has just put Peter the Hermit in Asia Minor, so the project was completed just in the nick of time! 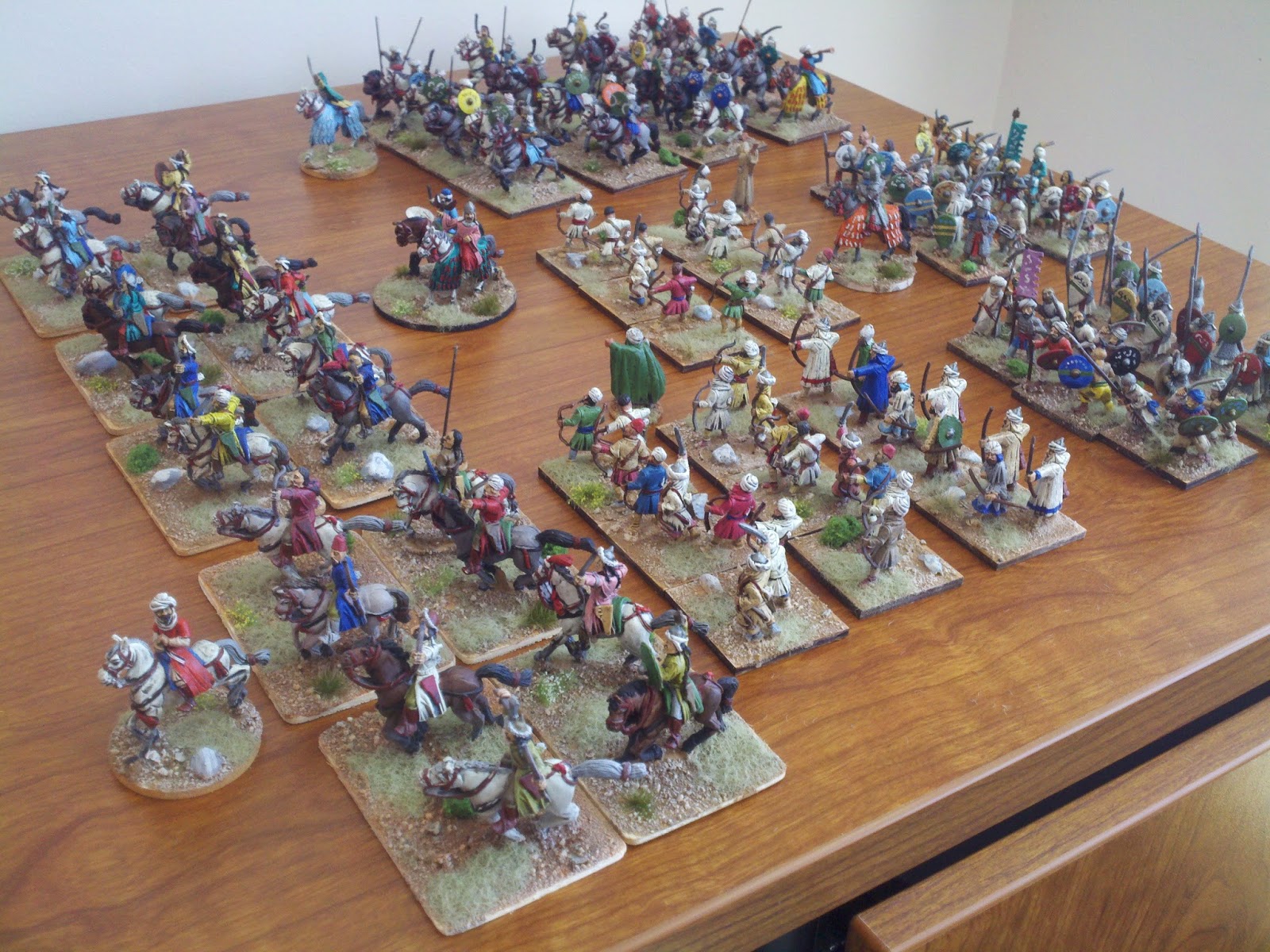 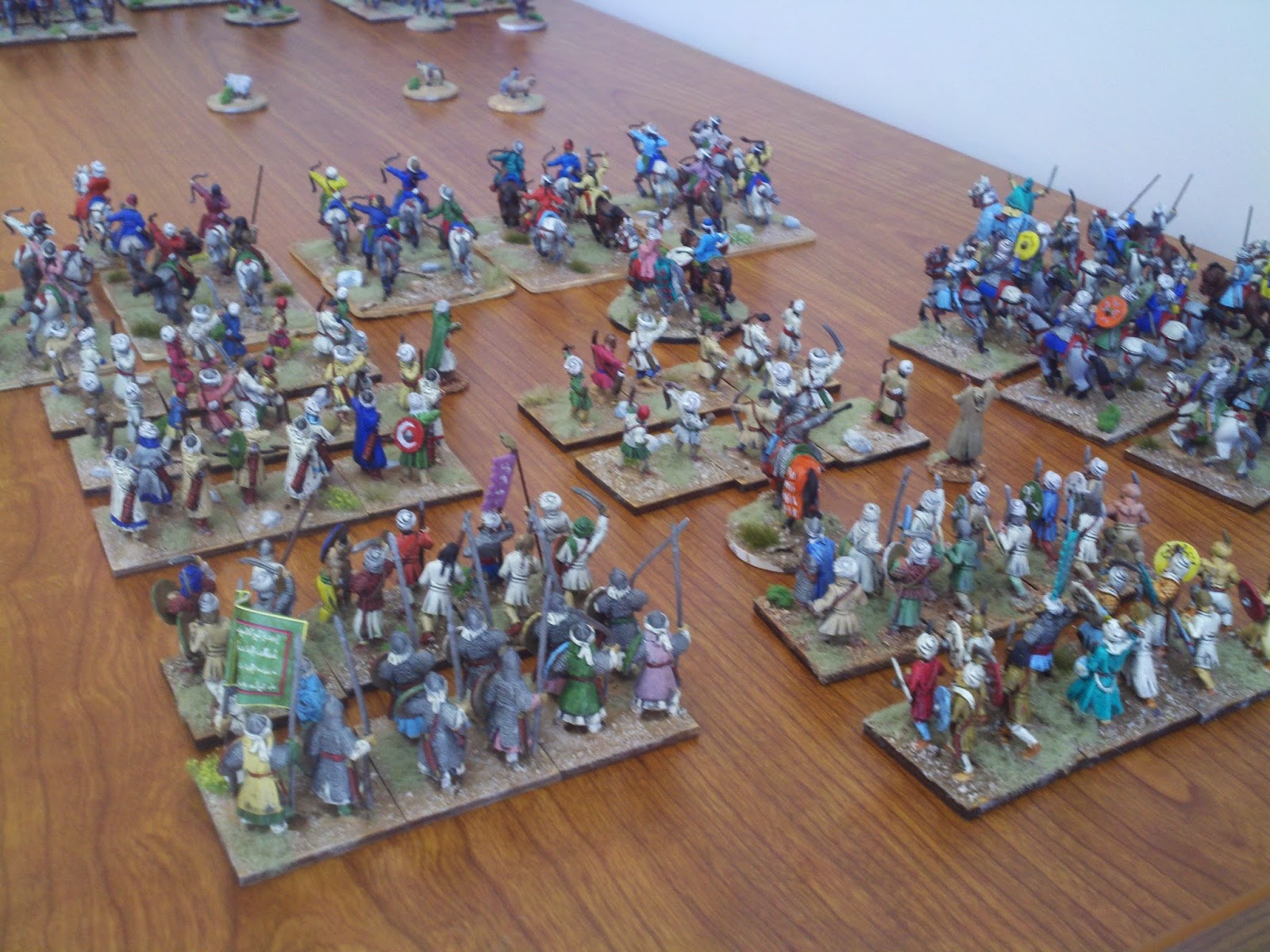 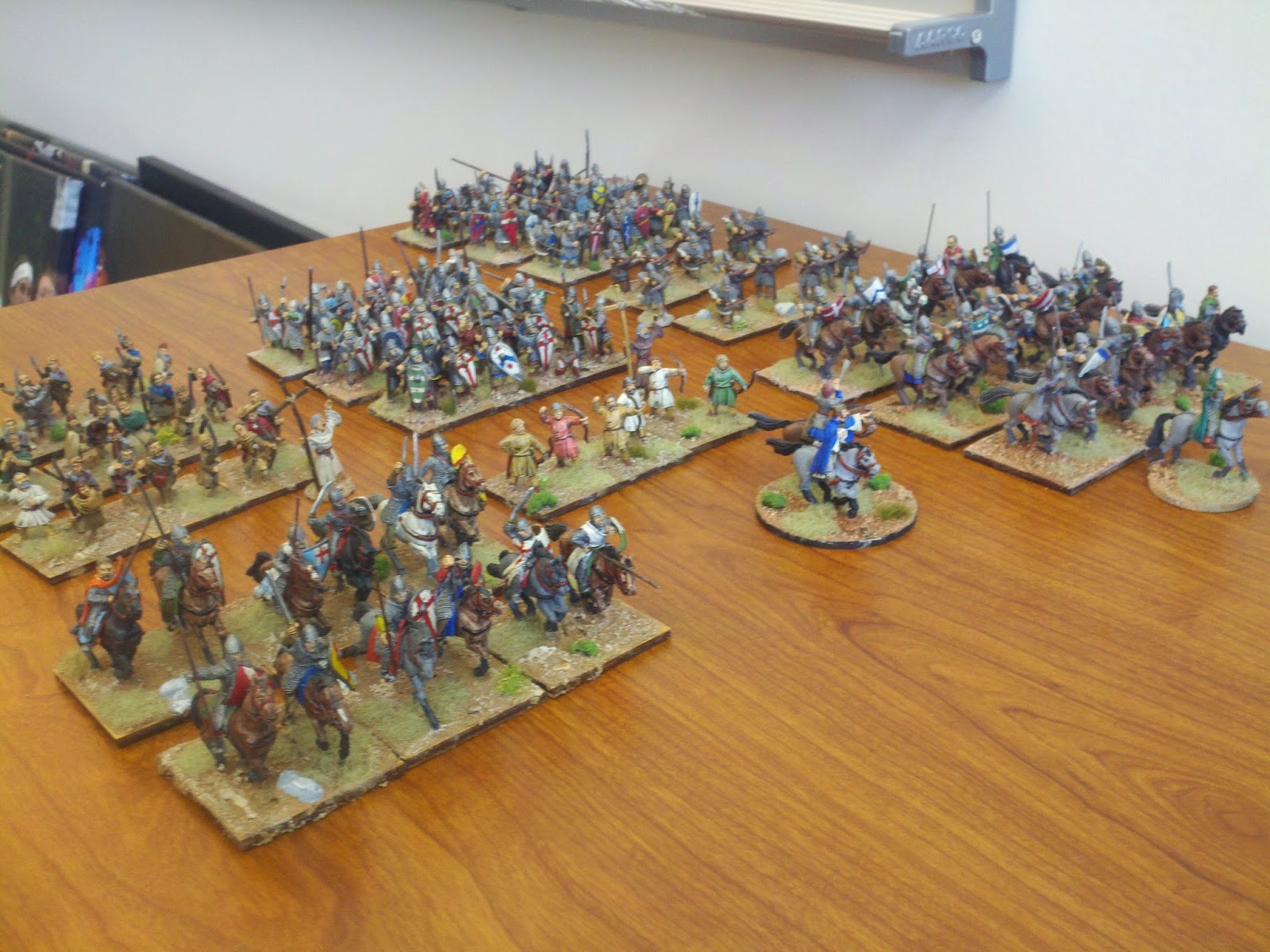 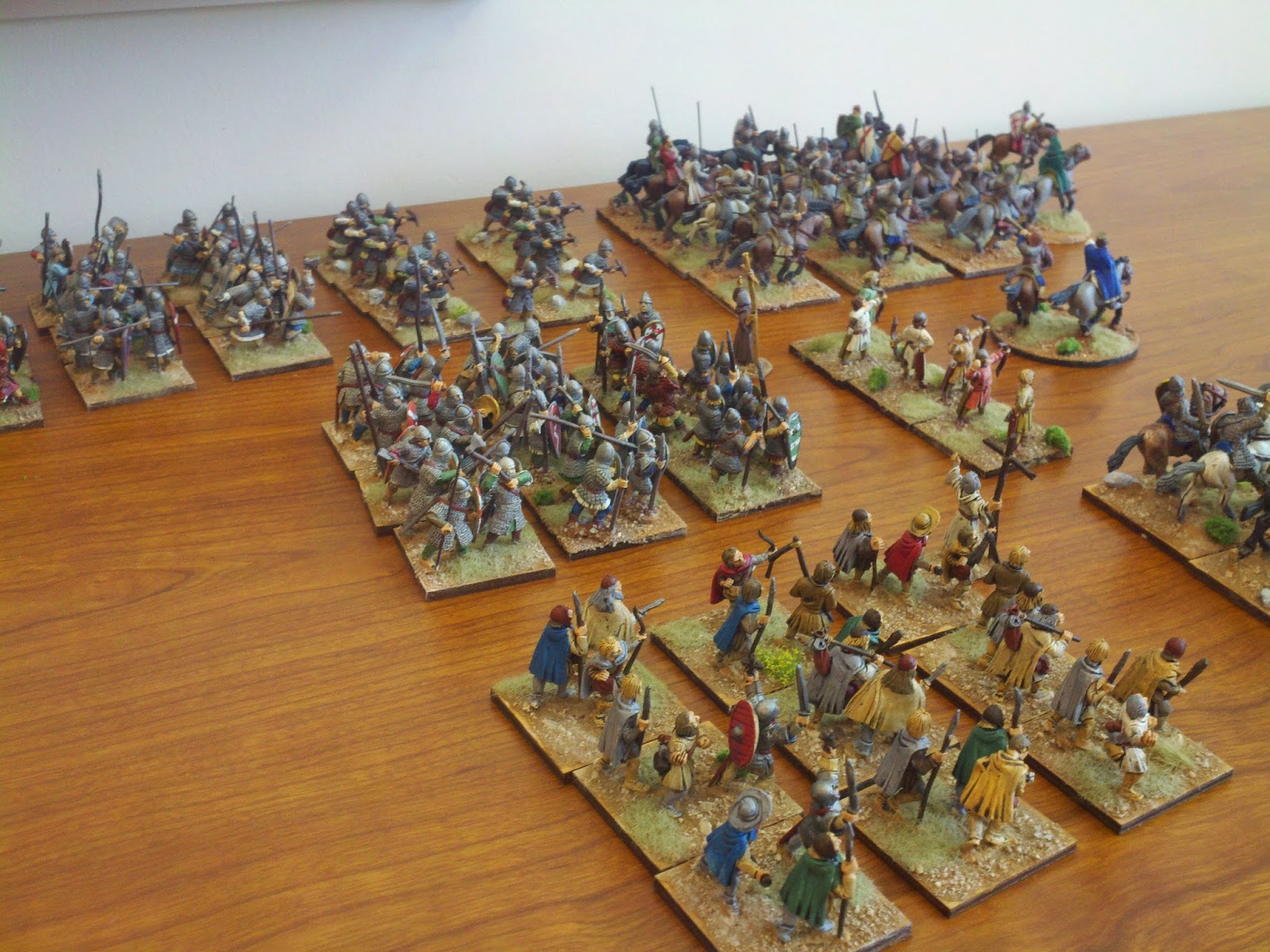 Posted by Mad Doctor Mark at 12:47 PM No comments:

In my opinion, no ships that ever put to water were uglier than the ironclads of the American Civil War. However, like chihuahuas, ironclads come around full circle to the "so ugly they're cute" category.  And one has to admire the ingenuity of the engineers and sailors who adapted to a whole new type of technology and a whole new style of warfare in the midst of a bitter conflict.

And so, over the course of a weekend, I painted up some 1/600 Thoroughbred and Bay Area Yards ships.  I still have not decided on a set of rules with which I will set them to fight each other, but I think they are nifty-looking puppies all the same. 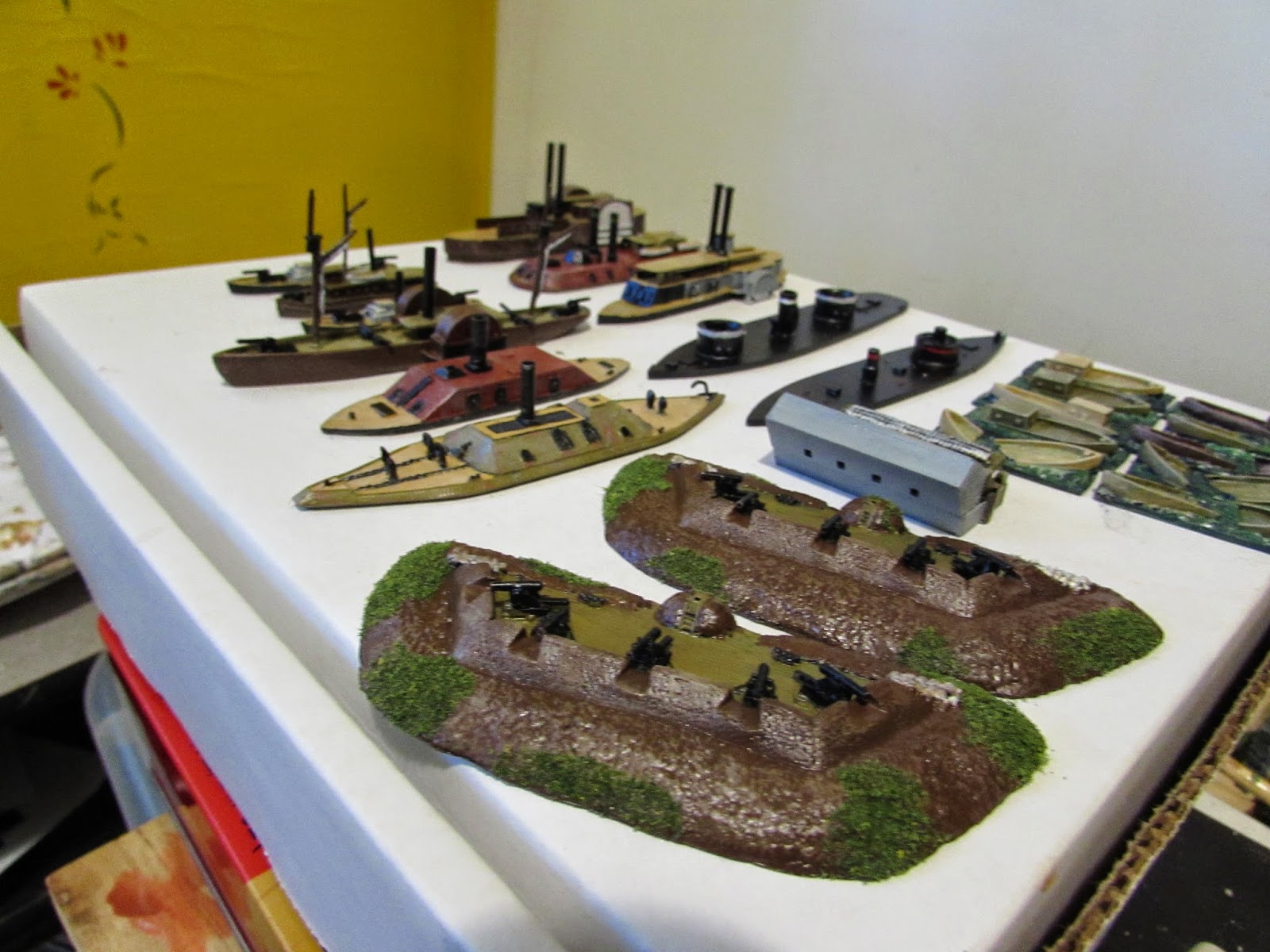 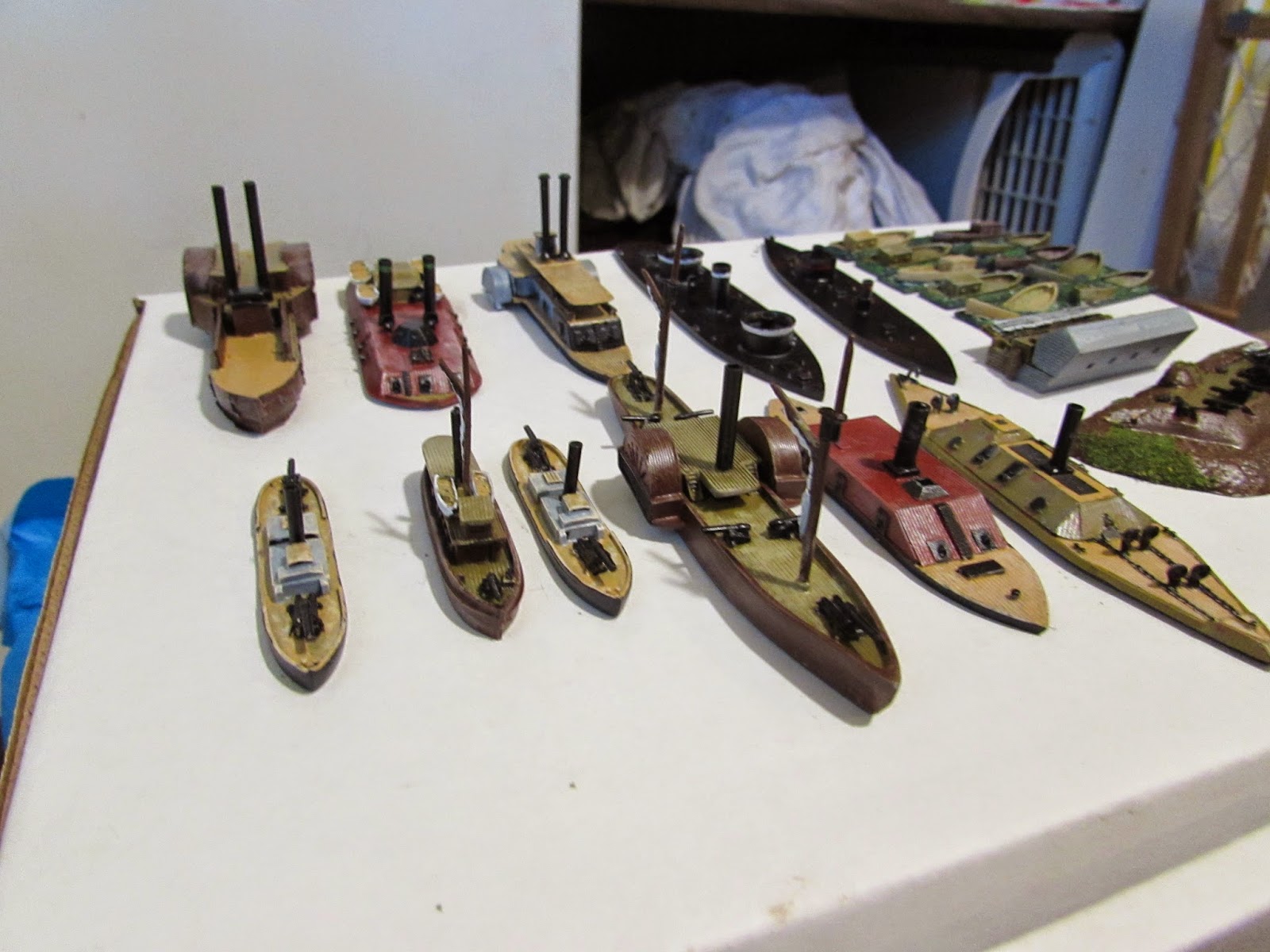 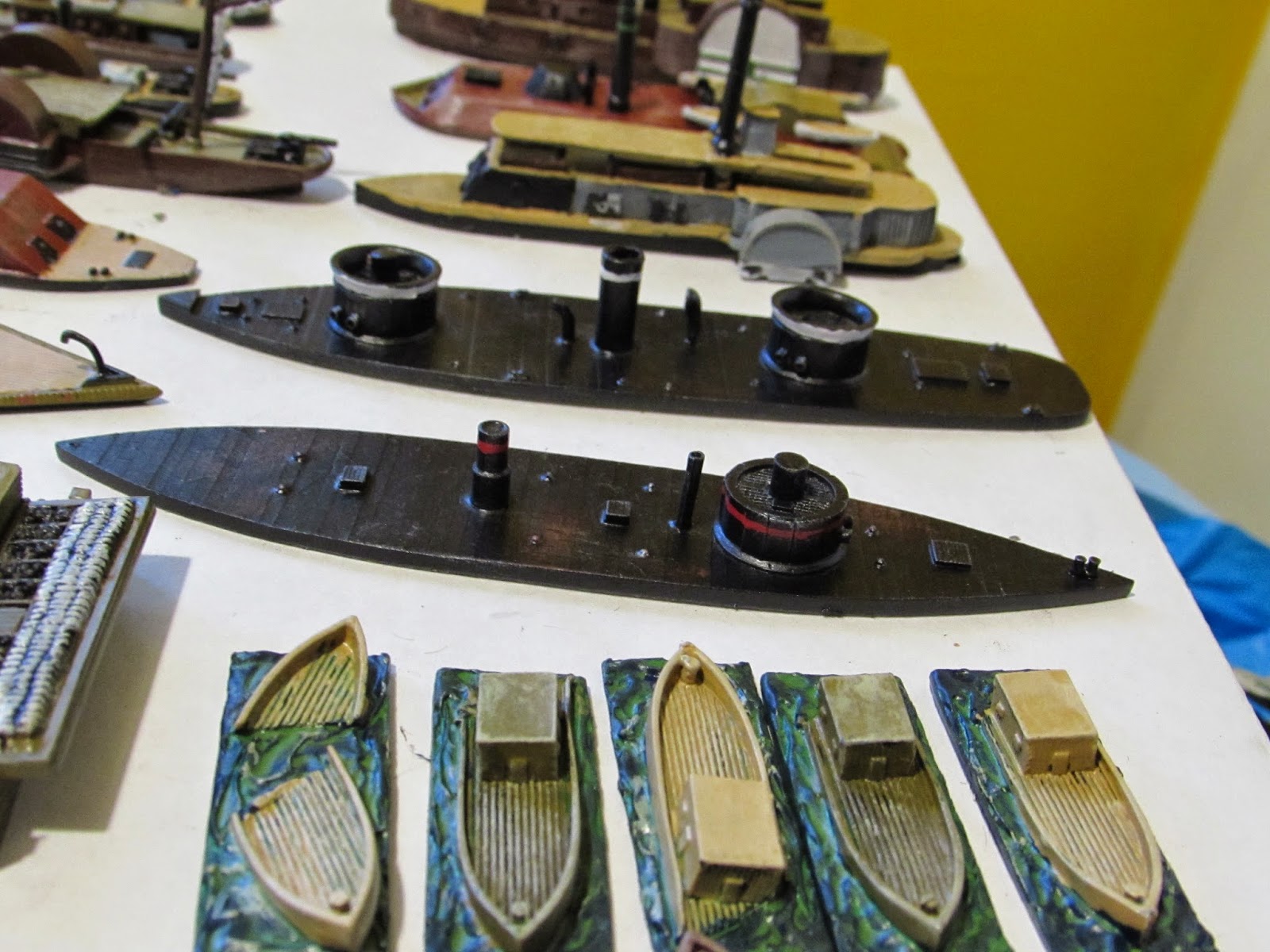 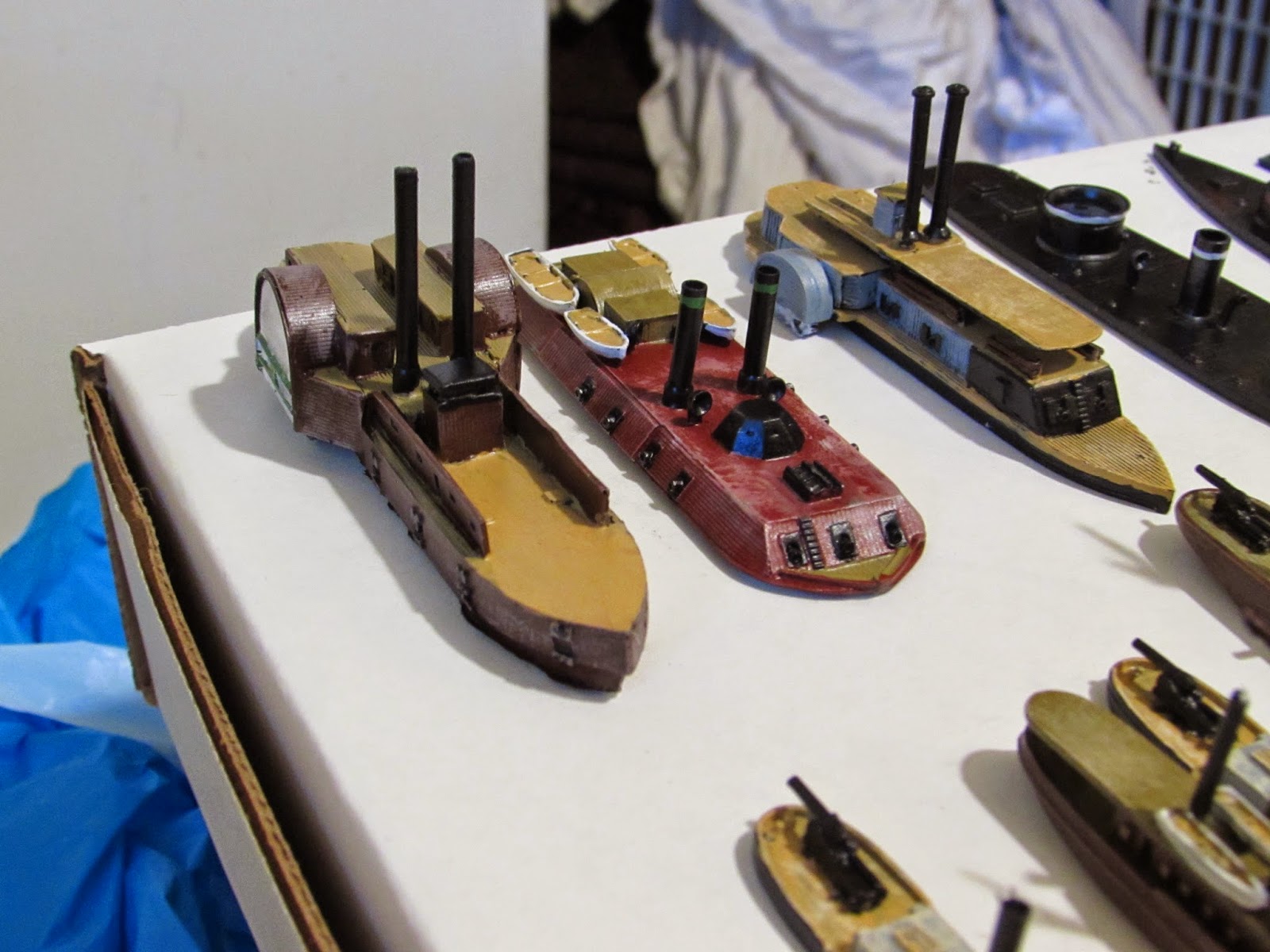 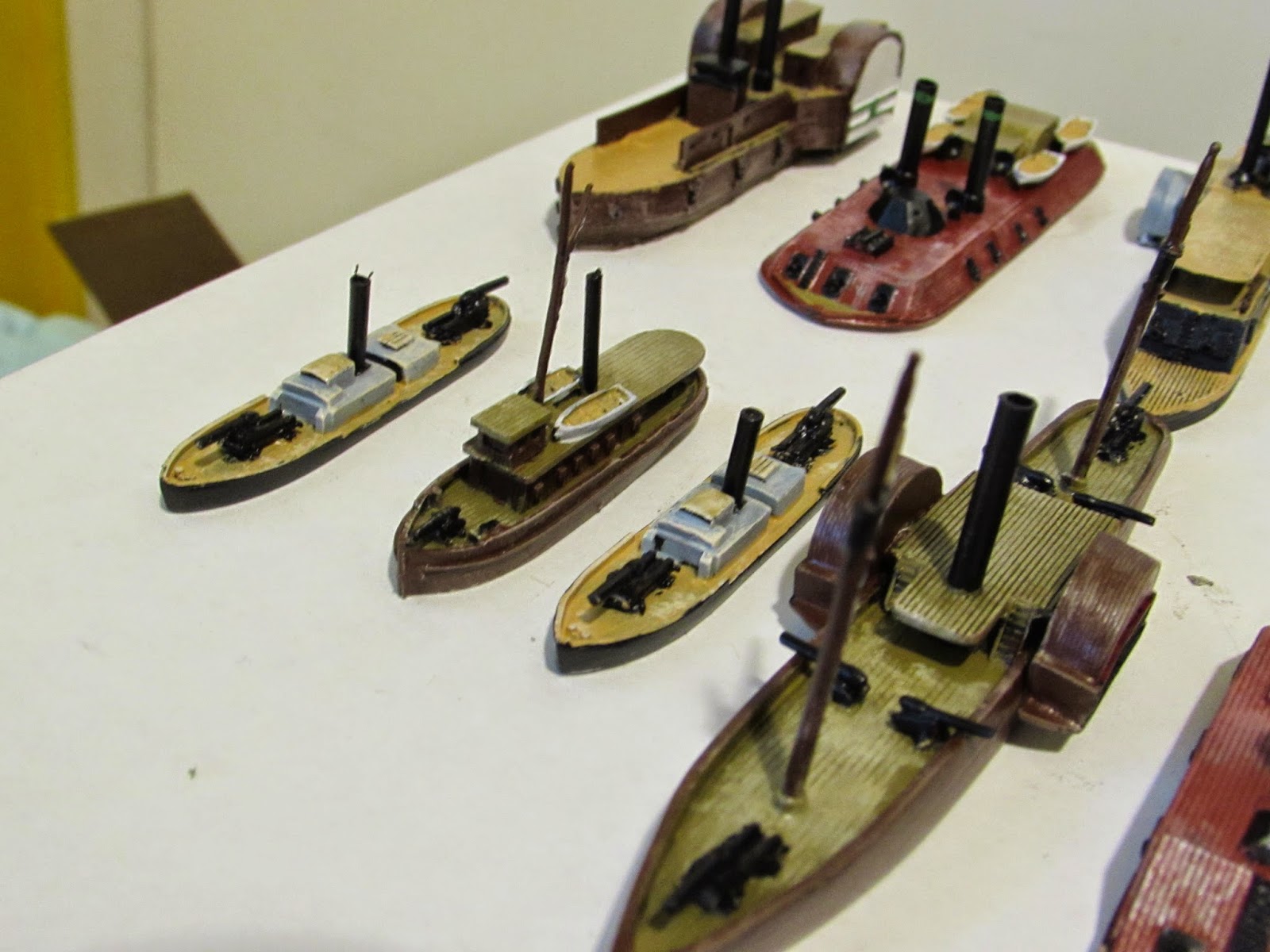 Posted by Mad Doctor Mark at 11:58 AM No comments:

Looking for Booty on Pirate Island

Once again, I have offered "Simulation Games" as a 'minimester,' a zero-credit course for students who want to pursue a semi-academic interest. So, the kids don't get credit, I don't get paid, but we have a great time. The students have fun, and I daresay they learn a lot.

While I usually set up games on the table in my sunny and spacious classroom, there is so much traffic through my room this year that I thought it prudent to set up the first game in the Archives, a space I curate.  Once we moved a stack of unloved trophies out of the way, we had plenty of room for a fairly large Pirate Island setup.

I gave the students a list of periods in which they could game. Because a few of them had experienced my Pirate Extravaganza last winter, pirates were at the top of the list once again.  I wrote up a set of simple rules (see the end of the article for a one-page summary).  Each player received their own ten man pirate crew. Their goal was to plunder the buildings and sacred sites of Pirate Island, and to kidnap the Governor and the Governor's daughter.  Each time they plundered, they got to draw a treasure card, which would produce a find worth a certain amount of dubloons (or it could be a hazard, like the box of angry scorpions).  Players could plunder from each other, but early in the game, there was a good chance that they might end up with a bomb that was held in their opponent's treasure pile.  I programmed many locations with hazards.  Not surprisingly, the Royal Marines would fire on any pirates they saw, but pirates who came too close to the brothel or the grog shop might get lured inside for a few turns.  Looting the church would rouse an angry mob, and coming too close to the cute piglet would unleash an angry boar. 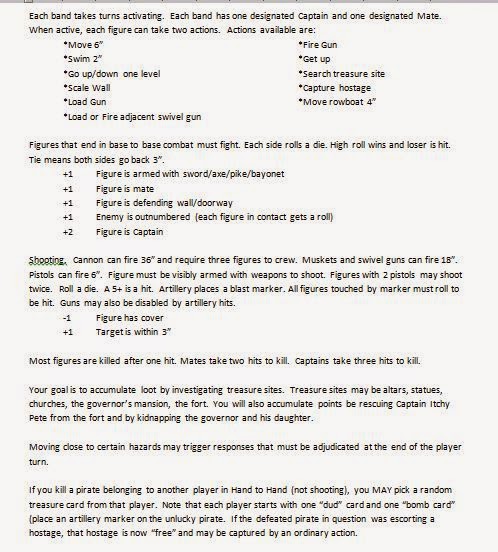 Looks like was have another session to go before the game is resolved.  Tune in next time!

Posted by Mad Doctor Mark at 10:41 AM No comments:

One of the cool innovations at my school in recent years has been the way summer reading assignments have been handled.  In the past, every kid read the same book, usually something supposed to be inspirational.  Given that we read two books by narcissistic frauds within the space of three years (Three Cups of Tea and Twelve by Twelve), I looked forward to these assignments even less than my students did.

Then, an administrator had a brilliant idea: why not encourage students to read books that they might find engaging. Forty faculty members each chose a book that they would like to read themselves, then students signed up for the books they were interested in.  Some teachers chose books on science and the environment, a few chose science fiction novels. There were two this year who chose Christian-themed books and several books that centered around sports. It should come as a surprise to no-one that I usually choose a book about military history. Last year it was Ambrose's Pegasus Bridge, this year I chose Cornwell's Sharpe's Eagle. While hardcore Napoleonic fans will scoff and roll their eyes whenever they catch the scent of Sharpe, I honestly can't think of a better introduction to the period for young adults. Cornwell's books move quickly, they have an engaging central character, and they have plenty of historical data that is approachable.

Then, on the day after registration day, our Upper School dedicates a whole day to summer reading. We are meant to have a short discussion, followed by fun activities for the rest of the day.  I led off with the BBC production of Sharpe's Eagle, warning them in advance about the limitations of a BBC budget. Then, for kicks, we watched the Sean Bean death reel. If nothing else, the Sharpe TV series does an admirable job of keeping an actor alive who is usually killed off by the second reel.

Students who know me could predict what came next: a miniatures-based simulation of the Battle of Talavera.  While I adhered more to my historical model more closely than the BBC did, I must confess I took several shortcuts, including adding my beloved Bavarians to Spain and having Napoleon's Old Guard pop up.

The rules were based off of Black Powder, but I took a few shortcuts (like dropping rules for disorder) and simplifying rules for formations.  I also used the activation system used in our Ambler Gamers club games--for most units, roll 3 dice and get one action for every 4+ rolled.

All in all, it was a fun day. The kids had a blast with the game, and they learned a lot in the process. Sharpe got good reviews and at least one kid said he picked up other titles. I also got a few inquiries about the Military History course I teach (and a possible new recruit or two for my simulation games club).

Posted by Mad Doctor Mark at 9:26 AM No comments: