And here are their opponents, Washington's Continental army.  I have nine students enrolled in the class this year, which should give each of them a brigade of 3-4 units to command.  one of the goals of the assignment is to apply the ideas of Sun Tzu and Clausewitz to the decisions they make, and to write up an after-action report describing the reasons for their success or failure.  We take a whole week and a half to fight the battle.  It ends up being a highlight of the senior year for many.  This year I'm planning on using a modified version of Black Powder, which I think does a good job of simulating the command difficulties each side had in this battle.

Here's the man, G-Dub himself.  He's checking out the artillery with his French poodle Lafayette at his heels. OK, I know that Lafayette was not present at this battle.  But he did visit out school in the 1830's, so I felt it important to include him. 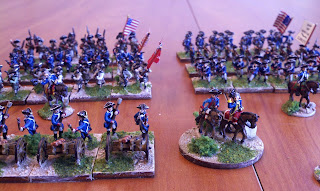 American militia get ready to enter the fray.  Last year, I had special rules for General Stephen's inebriation.  Added a lot to the humor element.  This year I'll probably just give his units a low command number. 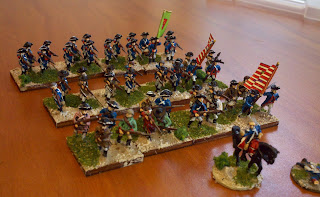 Posted by Mad Doctor Mark at 1:05 PM No comments:

Regular readers know that I run an annual simulation of the Battle of Germantown with my Military History class.  Our school played a role in the battle, serving as a hospital for the British just behind their main lines.   I've always used 6mm Baccus figures.  The students had a great time, but I always felt the spectacle of the game could be improved.  So this summer, I sold all of my old 6mm AWI soldiers and started anew.  Most of the figures below are Musket Miniatures, but there are some odd Minifigs and Old Glory figures I picked up on eBay.  I went for color and spectacle rather than accuracy.

The artillery, with Hessian support to the rear.

The British have one unit of dragoons, here passing some casualties by.

General Howe himself, waving encouragement to a unit off screen while a column led by Grenadiers prepares to march by.  Look, some idiot mounted the regimental flag on the unit in the rear upside down!

BTW, flags are from the excellent Warflag site, a great resource for cheap gamers like me! 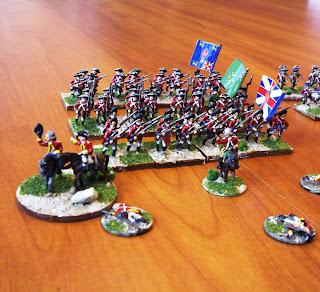 Posted by Mad Doctor Mark at 12:58 PM No comments:

So this year, I have completed several projects: The Zulu Wars, the ACW, and the American War for Independence. Each project consists of two sides, with enough units to fight a multi-player battle. I'm pretty happy with my progress, and while I fall far short of professional painting standards, I'm also pretty happy with my progress as a painted. I decided to try a few new things with my latest project: WWII in Western Europe. I had grown quite attached to my homebrew dip, which consisted of Finish floor polish, distilled water, a few drops of Jet Dry, and some black ink. However, I decided to try Minwax Walnut stain. It looks good on these 10mm figures, though it lacks the pop that the black wash provided. It also came out really glossy, which is why I am glad thought I bought a flat brush-on varnish. Frosting has not been a major issues lately, but it has been so humid around here that I did not want to take chances.

The figures are 10mm Pendraken.  The poses are limited, relative to their ACW line, but the castings are very clean and require almost no prep prior to priming.  They are insanely easy to paint.  After months of painting 18th and 19th century troops, its a pleasure to paint troops that do not carry flags or wear brightly colored cuffs and turnbacks.  I did this lot--two companies of infantry, support weapons, an anti-tank gun, two armored cars, and two Stugs, in four days. Still need to add some decals to the armor.

I plan to use these figs with both Battlefront WWII or a modified set of Squad Leader rules.  Gotta love Squad Leader.  Thirty five years old and it's still a heckuva lot of fun to play.

I'll post some pictures of the finished AWI project  after I bring them to their new home at my school. 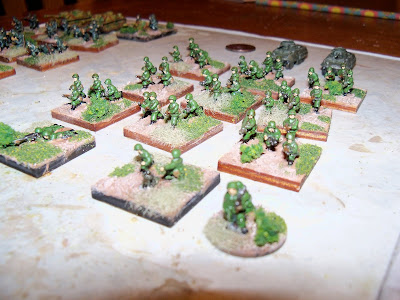 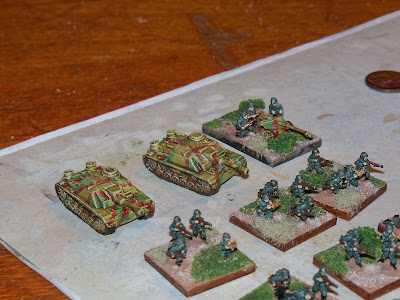 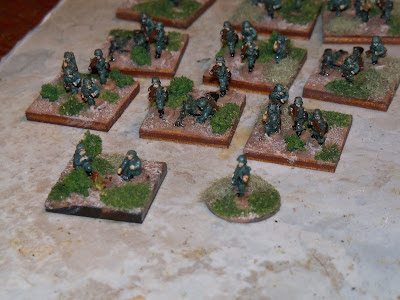 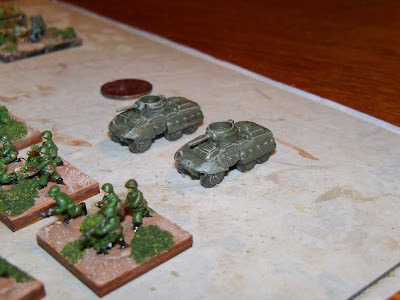 Posted by Mad Doctor Mark at 4:48 AM No comments: