Tales of the Arabian Nights: A Review


Tales of the Arabian Nights 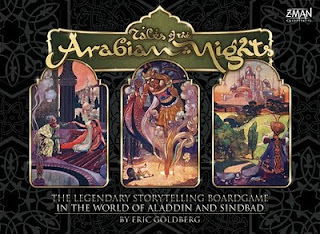 Back in college, I had a long and spirited argument with a friend about the role of the critic. He maintained that the critic’s main responsibility was to articulate his reaction to a work, making clear his reasons for his like or dislike of his subject. My position was that the critic should distance himself from his own opinions, listing the strengths and weaknesses of a work and identifying those people who would be an audience for it.

The reissue of Tales of the Arabian Nights is sure to draw strong positive and negative reactions from gamers. I feel that if I gave my own reactions, it would come across as narrow, subjective, and parochial. So, I will attempt to channel my college-age self, putting forth the many strengths of the game while describing what I acknowledge to be potential pitfalls. Certain elements of the gaming community will loathe a game like this, while others will put it on their all-time top ten list. 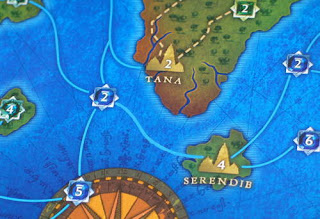 First of all, few could argue that, visually, the art is top notch. The map had been the strength of the 1985 West End edition, and the new one pushes it to a new level. It is more readable and easy to use than the original map, and both the design and color are lush and evocative. The cards and other components represent a vast improvement over the original. What had been crude cardboard chits with silhouette artwork have been replaced by full color, high-quality cards, die-cut pieces, and stand-up player pieces. I’m sure the lavishness of the game design added a few dollars to the price, but I am glad that ZMan did not skimp. For lovers of the game, the physical components of the game feel like a reward for years of dedication. 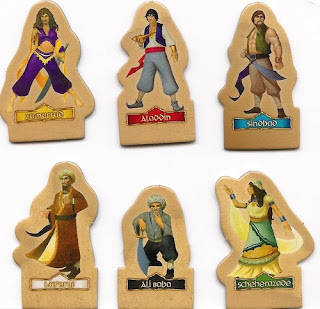 For those new to the game, players take turns moving their pieces in a nonlinear manner around the board. The goal is to acquire a predetermined number of Destiny and Story Points, obtained through encounters. A player has at least one encounter on each of their turns. A roll of the die sends a reader to the “Book of Tales,” a collection of nearly three thousand paragraphs, which guide the players through short adventures similar to the old “Choose your Own Adventure” books. Players must pick how their hero reacts to an encounter from a predetermined list of responses, like grovel, pray, beat, or avoid. Along the way, players acquire skills which often (but not always) improve the result of an encounter. In addition to the aforementioned Story and Destiny Points, players can gain or lose wealth (which affects movement) and statuses (like Accursed, Enslaved, Greif-Stricken, Sex-Changed, or Imprisoned). Interaction between players is minimal, unless special variants are brought into play. 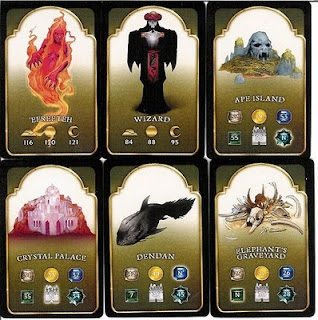 Results are often counter-intuitive. In one game, a player gained the status “Lost” in his home city. Another wound up getting “Married” to a same sex partner (I suspect that, while enlightened, the medieval Islamic world was not THAT tolerant!). Sometimes seemingly foolish decisions lead to good results (you might beat a powerful wizard only to have him offer you a valuable ransom, while if you attack a vile thief you might end up in prison, as the thief was really a prince in disguise). Even with a good set of skills, players often find themselves at the mercy of seeming capricious turns of fate.

I could not in good conscience recommend this game to a player who feels that their decisions alone should lead to victory or defeat in a game. Our most recent game took place alongside a game of Diplomacy, and the contrast between the two groups of players could not have been more distinct. For the Diplomacy players, games were all about strategy—making plans and making good decisions to realize them. Yet it was the people playing Arabian Nights who more often exploded into hoots of laughter and spontaneous cheers. Relinquishing control to fate can have its appeal, too, as long as the player can occasionally steer things in a desired direction. Anything can happen in Tales of the Arabian Nights, and every turn brings surprises and wonders. Thus, the game captures the spirit of mystery and adventure inherent in the source materials, from the original texts (I prefer the translation of Husein Haddawy) through the cheesy Harryhausen Sinbad films, through Disney’s Aladdin. I can’t think of a board game I’ve had more fun playing, even if my strategic senses were not always fully engaged.

Posted by Mad Doctor Mark at 2:59 PM No comments: