Fun night with the Ambler Gamers last night. We did an ahistorical battle from the War of Spanish Succession: French vs. Austrians and British.  There's a big gap in my wargaming experience. I don't think I've played a serious historical wargame in any period between the mid 15th century and the American War of Independence (pace, pirates. I said "serious" historical wargame).  Pikes and shots and tricorns do not capture my imagination the way that other periods do.  But Joe's collection of colorful Front Rank figures arrayed on the tabletop, standards flying, made a good case for the age of Louis XIV.  I teamed up with Scott  to play the French, facing off against the other Mark and the Steves (Turn and Pilch).

Battle of Iuka, the Opening Moves 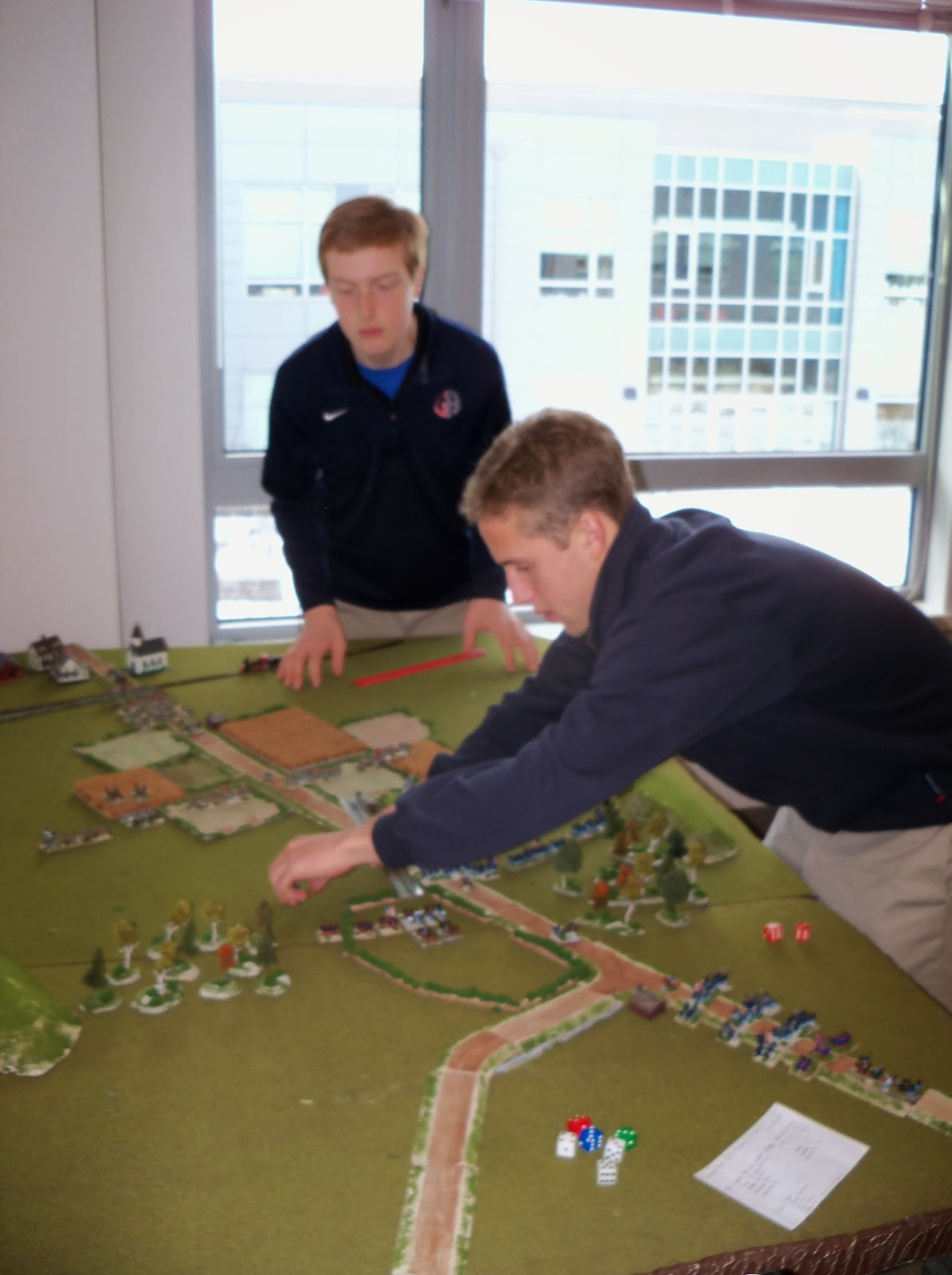 Meet Alex and Tyler.  They are the participants in my Simulation Games mini-course. Both are new to miniatures game, though both are bright young men with a solid interest in history.  In our first session, I laid out the basics of the Black Powder rules in about ten minutes and described the scenario to them.  Then they were off and running. 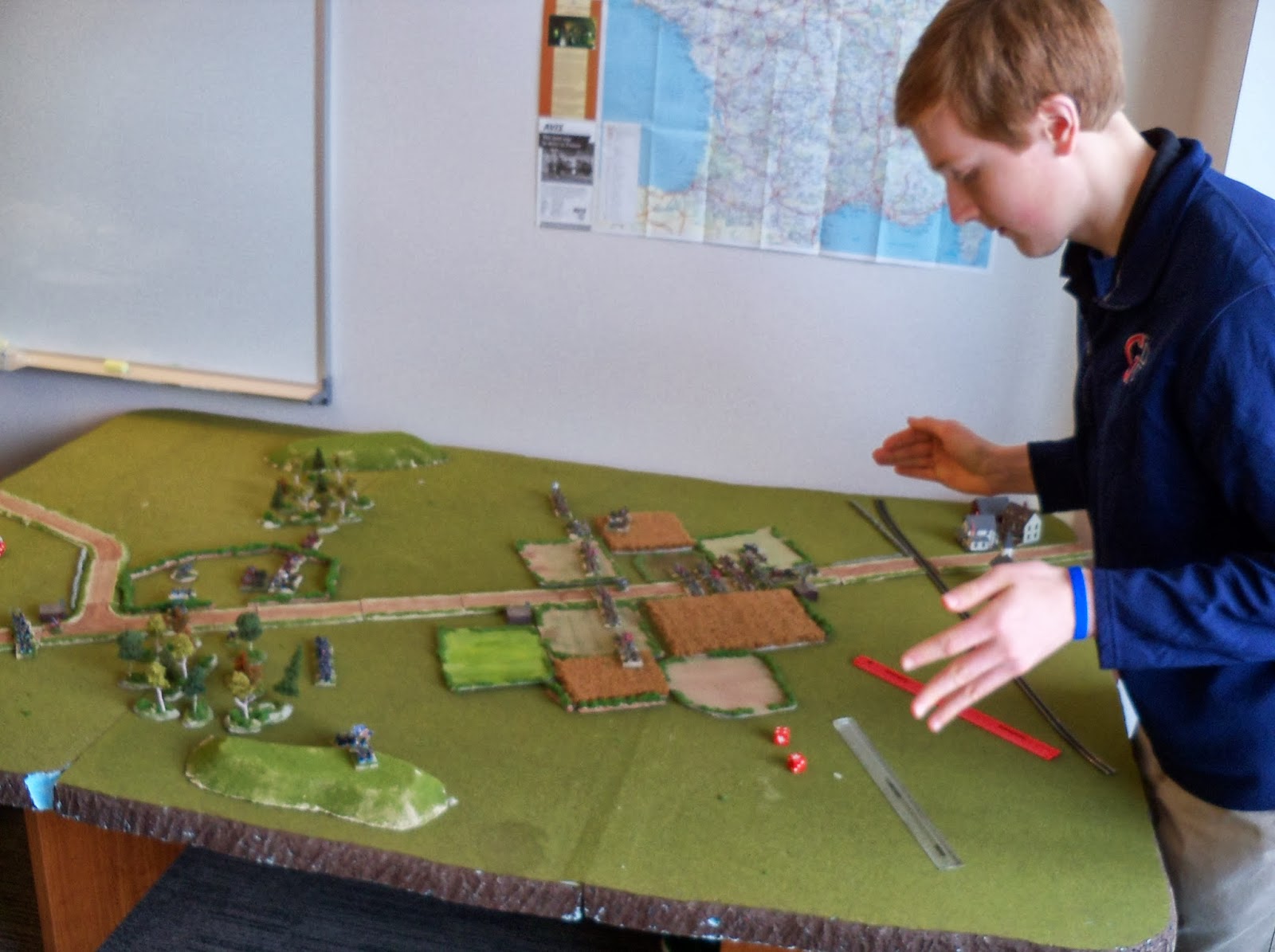 The first turn went quickly, mainly because the Alex, the Union commander, botched the command roll for his reserve brigade.  He tried to move his right around the Confederate flank, but his troops moved at a creep.  Worried about being enveloped himself, he pulled his remaining two regiments back to where they could be better covered by the reserve.  Above, we see Tyler making one of his many excellent command rolls.  Apparently, the Confederates were issued with Segways in 1862, allowing them to motor around the Iuka battlefield.  Tyler wanted to cover a larger front, so he ordered two of his front-line regiments into skirmish, while he tried an envelopment move on his own right flank. 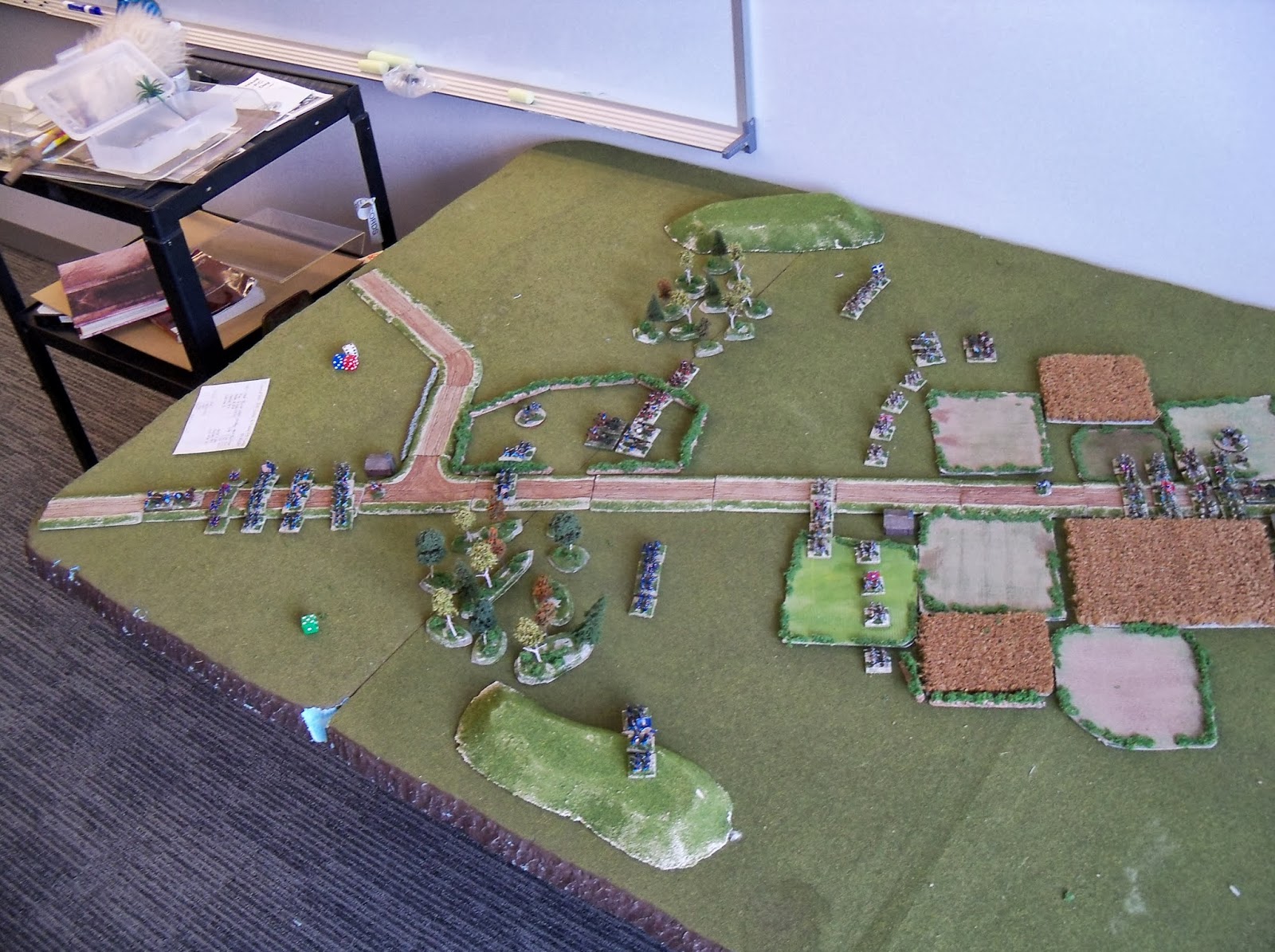 Above is a shot of the battlefield after a turn and a half.  The Union reserve on the far left remains stuck in the mud.  However, the retreating Union artillery (the Ohio battery, if you're being historical) was able to unlimber and deliver a devastating volley into the Confederate center.  Confederate return fire was weak.  All move and no shoot, one might say. 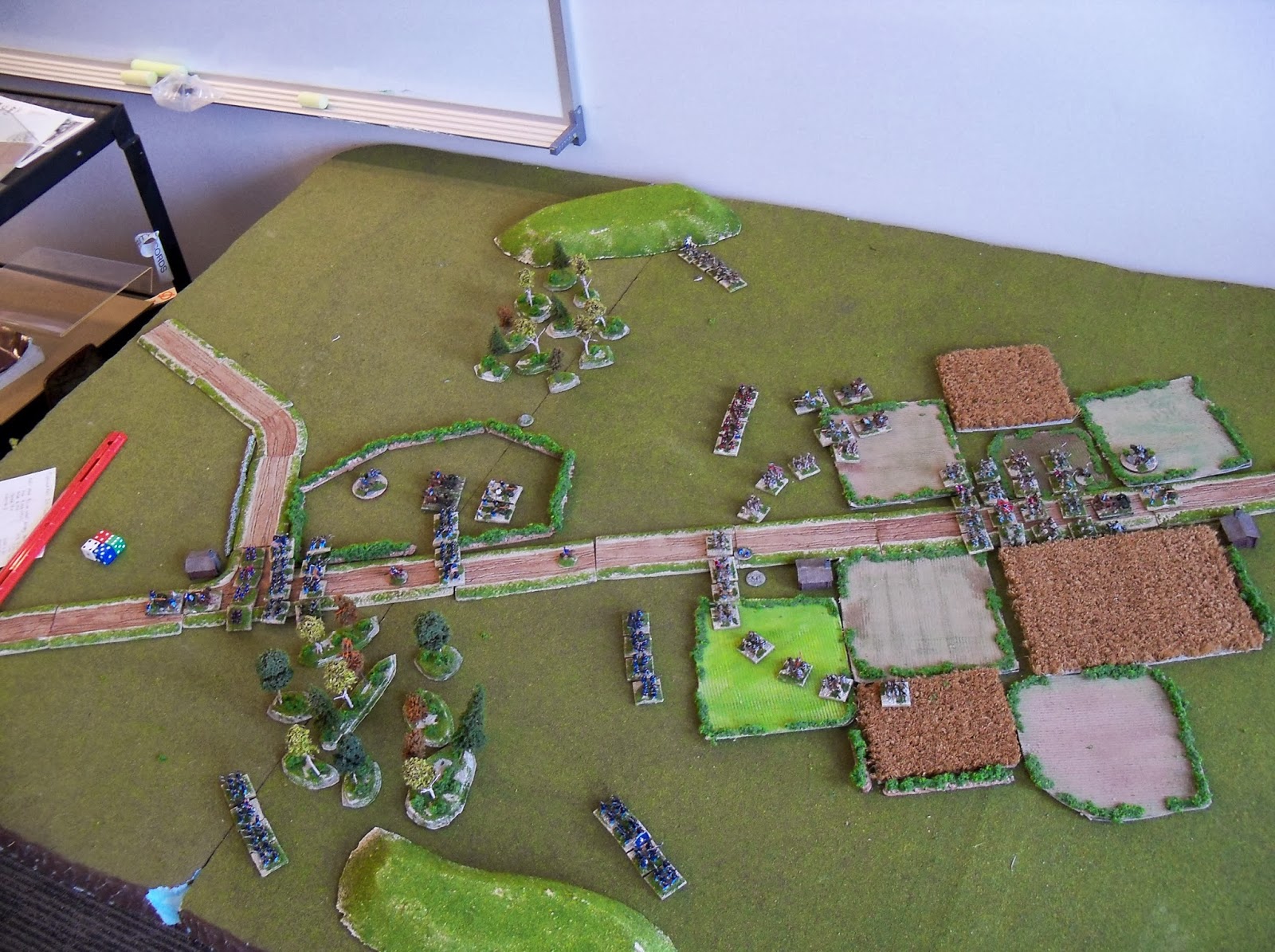 This is the scene after two and a half turns. We have only forty-five minutes in a class period, so it is amazing what smart young novices can do with the Black Powder rules in a short period of time. I have very little tactical advice, and both were willing to accept the consequences of their tactical blunders.

Here, we see the reserve brigades finally responding to the sound of the guns. Most are bolstering the center, but Alex still has plans of making a strong push on his right, detaching a regiment to support his earlier flanking attempt.  Tyler's flank march moved quickly, but the regiment found itself with nothing to fight.  His ring of skirmishers seems to be holding, but the regiment in the center has already been shaken by artillery fire.  We will pick up next week with the third Confederate turn.
Posted by Mad Doctor Mark at 3:00 AM No comments:

The Fortifications at Fort Washington 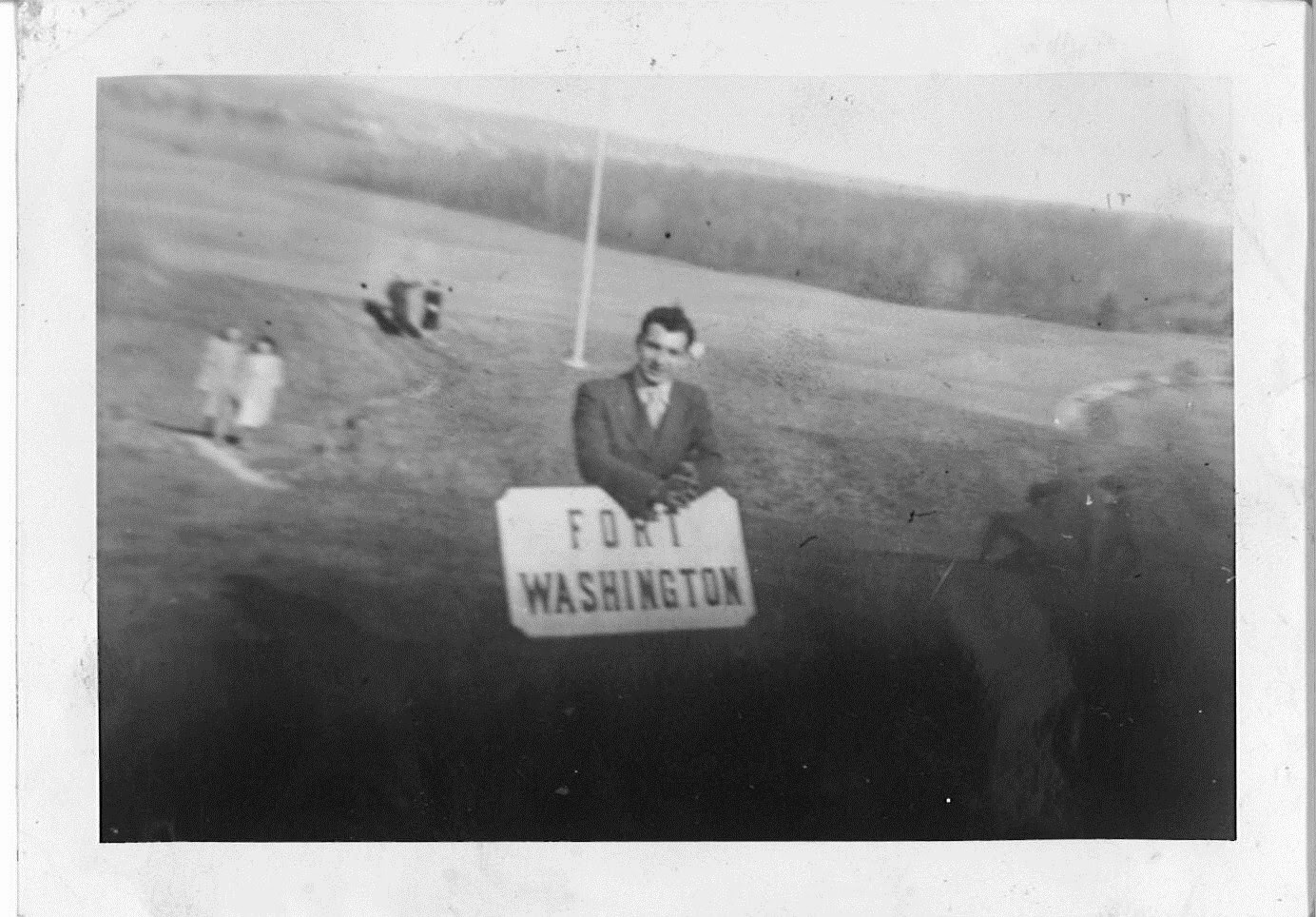 My mother is helping my nonagenarian grandmother move into a smaller space, and she sent me a bunch of photos that Grandmom had saved. Among them was this photo of my grandfather at Fort Washington. Based on his age, I'm guessing this was probably taken in the late '30's or early '40's. It shows my Italian-American Grandpop with a full head of hair standing in front of a redoubt at Fort Washington, built by Washington in summer and fall of 1777 to protect his encampment at Whitemarsh.  He's standing on Camp Hill, looking southwest. The hill in the background is home to St. Thomas' Episcopal Church, which is as close as Howe's troops got to this part of the lines.  Behind my grandfather's head is Hope Lodge, an 18th century house that served as a hospital for Washington's troops. Grandpop worked for the Civil Conservation Corps in the 1930's,m and I wouldn't be at all surprised if he did some restoration work on this site as part of his service.  He seemed to know a ton of local history because of his experiences with the CCC.

The earthworks which you can see no longer exist.  They were bulldozed in the mid 1940's. The official story was that they were accidentally cleared to prepare for an Independence Day celebration. However, the following year, the owner of the land sold to the Pennsylvania Turnpike commission.  Thus, in the spot where Grandpop is standing, cars and trucks currently whiz by at 70 MPH.  Shots like this are all that remain of an important chapter in America's Revolutionary War.
Posted by Mad Doctor Mark at 4:40 AM No comments:

My school gave me permission to offer a no-credit mini-course on "simulation games." Given that this was an additional time commitment to already over-scheduled prep school students, I was pleasantly surprised to see that two students were able to fit it into their schedules. Neither has any experience with wargames, so I wanted to start them out simply.

I chose as our first game the ACW Battle of Iuka, which took place in 1862 between two armies blundering around in northern Mississippi, trying to outmaneuver each other.  Rosencrans thought he had Price trapped, since ord was moving up his own division to support him. However, Ord never responded to the sound of the guns (citing an acoustic shadow), and Rosencrans ended up facing a force about the side of his own commanded by the Confederate general Price, who was in turn waiting for support from Van Dorn which never arrived.  The confederates had just over 3000 men on the field, the Union had 4,500.

I'm surprised that Iuka doesn't get more love for wargamers.  It is small--I scaled it down to eight regiments on a side, but even with that I have more than 50% of the historical forces deployed on the table.  It is basically a meeting engagement, with two deployed brigades facing each other and reserve brigades moving up to support them.  Terrain is simple--an area of woods blocking the Union advance and the town of Iuka itself in the Confederate rear.    Lots of room for maneuver and plenty of opportunities for commanding generals to make meaningful decisions that would effect the outcome. 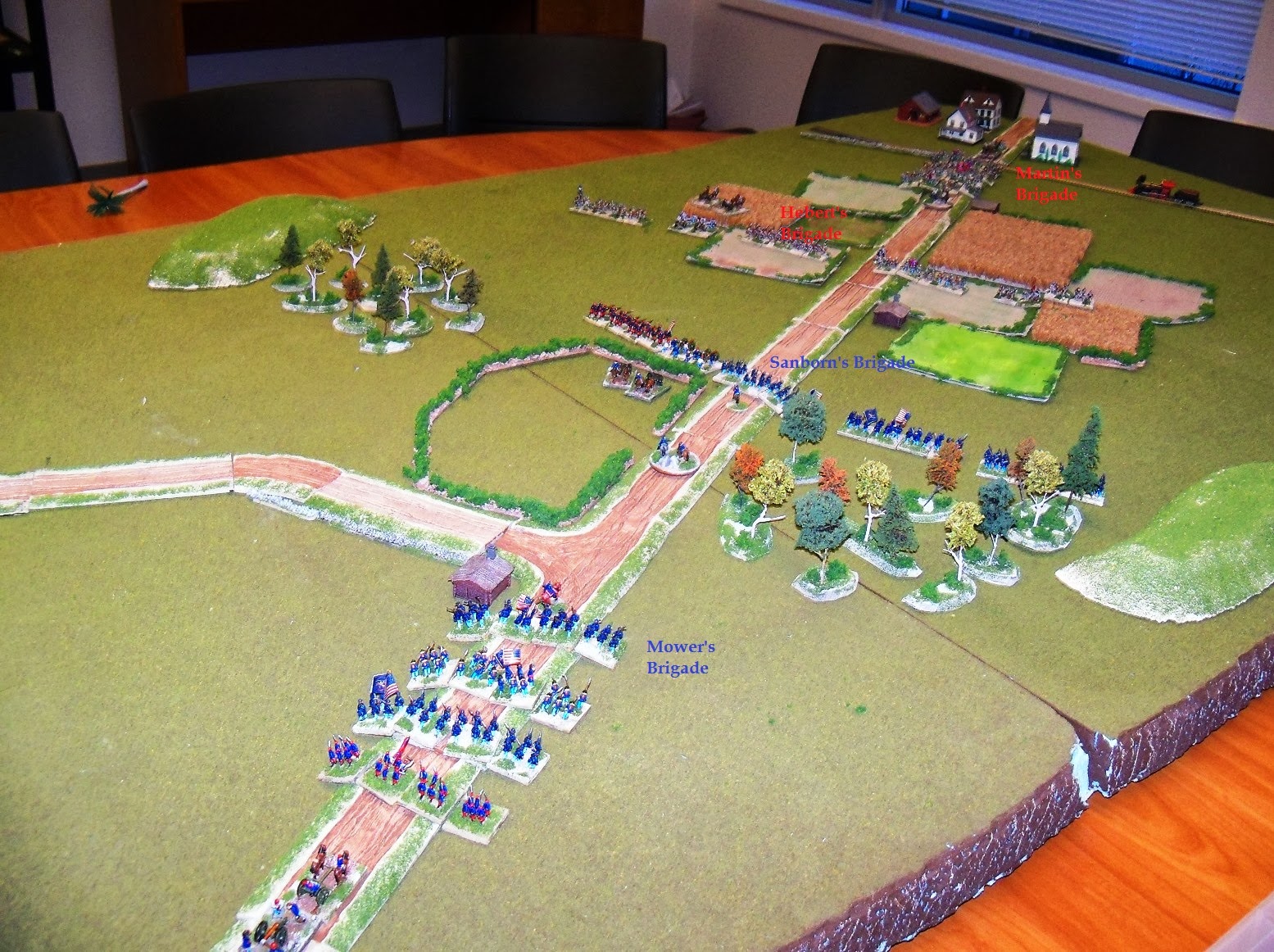 For rules, I chose Black Powder.  Despite its flaws, Black Powder is a great entry into wargaming, offering a fast simple way to resolve combats. In my experience with other students, novices can pick up the rules in two class periods and adjudicate most situations as they arise on their own. With some rule sets, i would hesitate to unload a full division on a novice player

So, each side starts with the same basic forces at their disposal: Two brigades of four infantry regiments each (there was some cavalry at Iuka but they appear to have fought dismounted), with three sections of 12lb Napoleons to support them.


So, we were all set up...and one of the two students missed the first class!  So now we await our first official session next Tuesday.

Posted by Mad Doctor Mark at 12:16 PM No comments:

The Worst Children's Book Ever

So, recently, I saw an article on Cracked.com about the worst children's books ever. To be sure, these are all terrible books, ranging from antisemitic to incoherent.  But all of them pale compared to this doozy by Thomas Matthiesen.  It is still available on amazon.com, this proving that existing child abuse laws are inadequate to shield the world's youth from this horror.  And, by horror, I'm not just talking about showing kids terrible things like death or pain. We're talking full-on, gaze-into-the-void, life-is-meaningless existential horror one doesn't normally encounter until one reads Nietzsche  in a philosophy survey in college.

Oh, you think I'm exaggerating?  Take a look for yourself...

As always, click to enlarge. But I must warn you, you will suffer an immediate Sanity Check at -20 to your die roll if you do.

Posted by Mad Doctor Mark at 7:58 AM No comments: 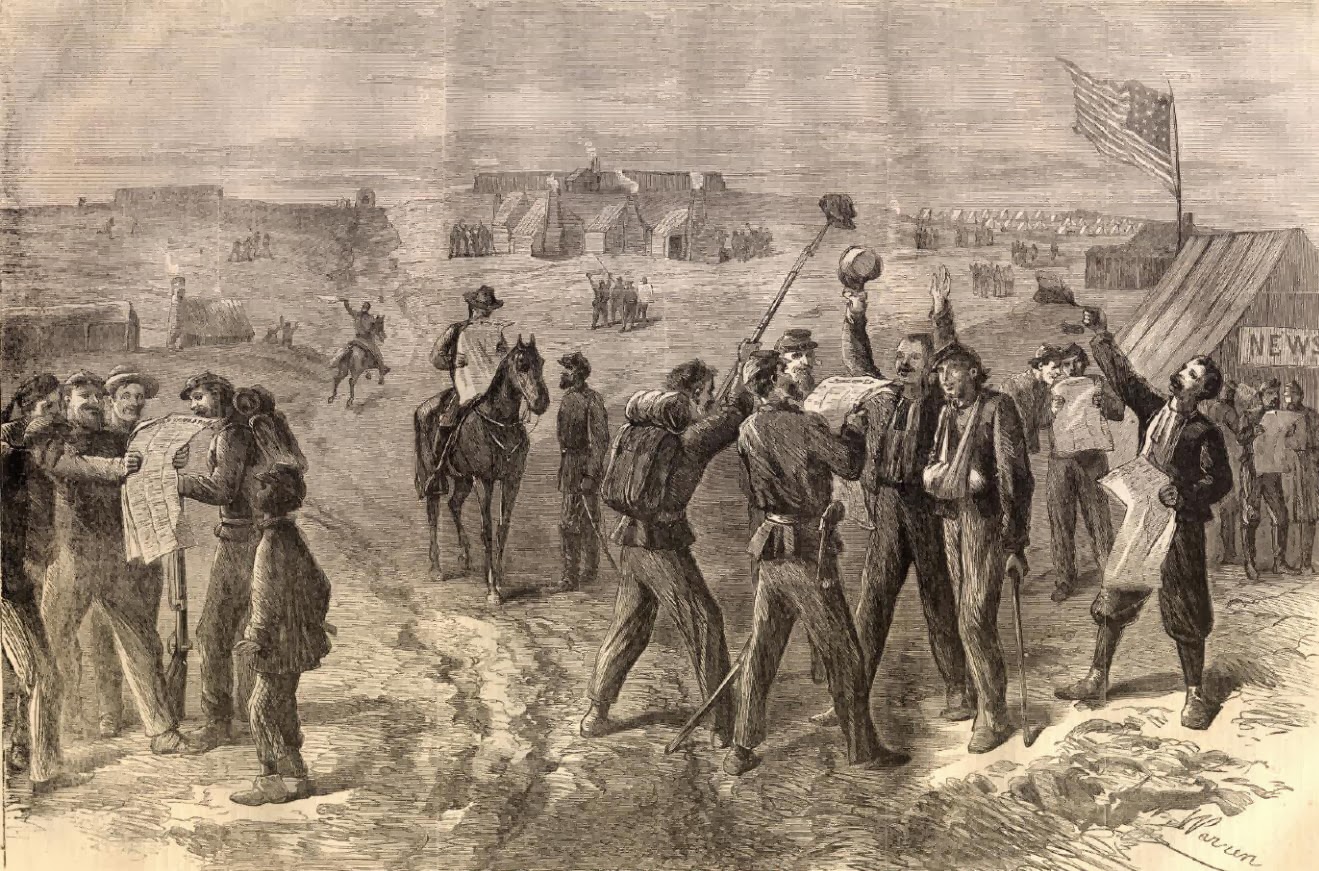 My sincere and heartfelt thanks go out to my readers for helping me pass the 50,000 pageview milestone.  It has been my pleasure to share thoughts and images of a life in gaming, and I hope this site has been worth your visit.  Thank you for your support. Posted by Mad Doctor Mark at 3:28 AM No comments:

Our mini-assembly took place between 9:00 and 10:00 today.  Some sections watched movies, some did karaoke.  One group learned how to tie bowties, because bowties are cool.  But me...well, was there any question that I would do a miniatures game?  Since I had only an hour and most of my players had never done anything more challenging than Risk, the rules had to be super-fast and super simple.  I created nine teams, each with their own goals, then let the fun begin.


Posted by Mad Doctor Mark at 8:02 AM No comments:

Attack on Pirate Island: Before the Party

Every year, my school allows teacher and students to offer hour-long mini-assemblies.  Naturally, I use the opportunity to introduce the fun and spectacle of miniature gaming to a new generation. I usually choose a fast-playing skirmish game to give kids a taste without slamming them with simulation rules.  Last year, I ran a Wild West shootout that was well received.  This year, I chose to do a Pirate game, inspired in no small part by the excellent and gorgeous game run at Historicon by the Prairie Pirates. While my game is but a pale shadow of the spectacle Scott Christian and his crew produced, I'm pretty happy with how it looks.  I decided to take and share a few photos before the students get their grubby little hands on the minis. 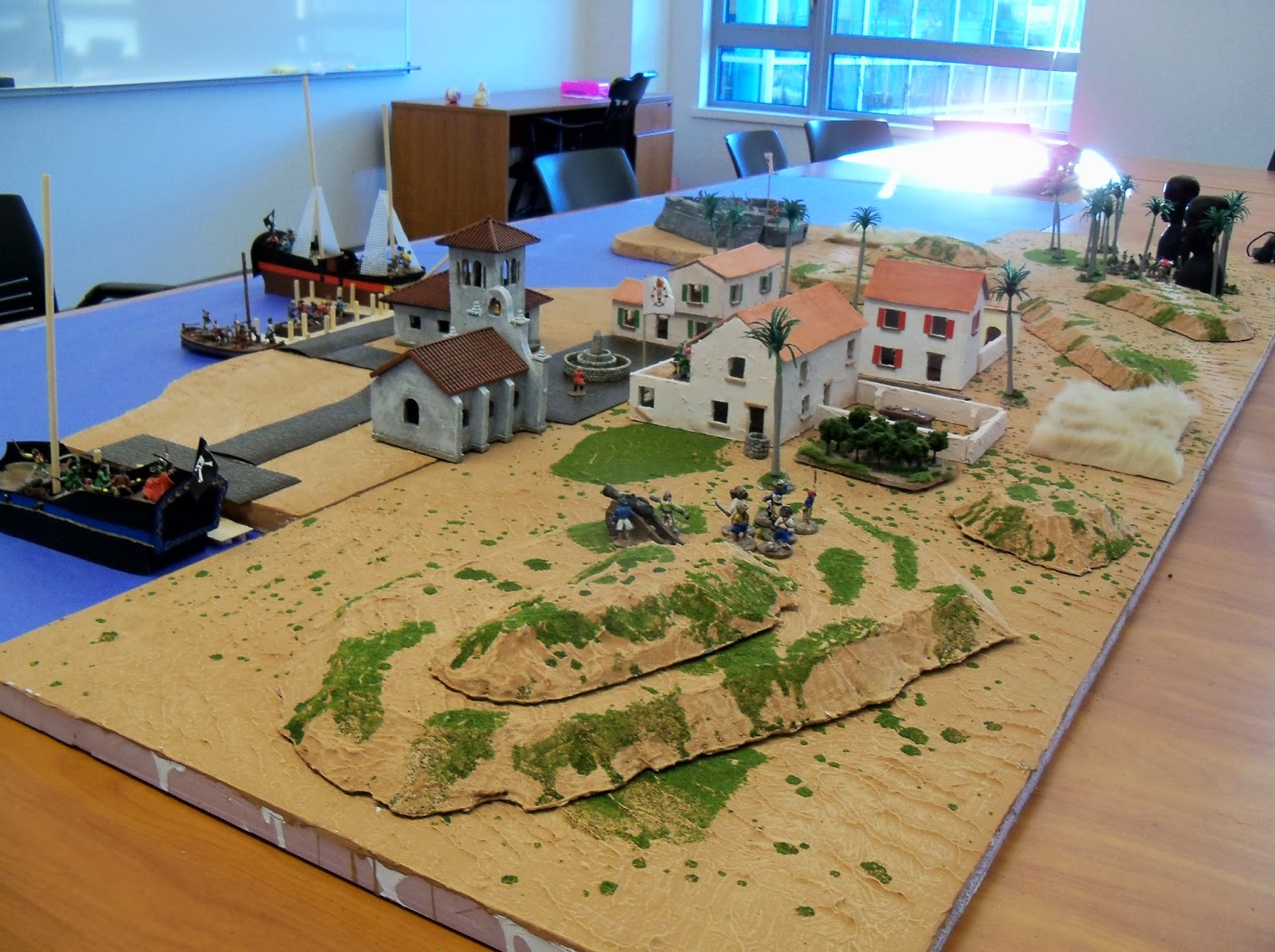 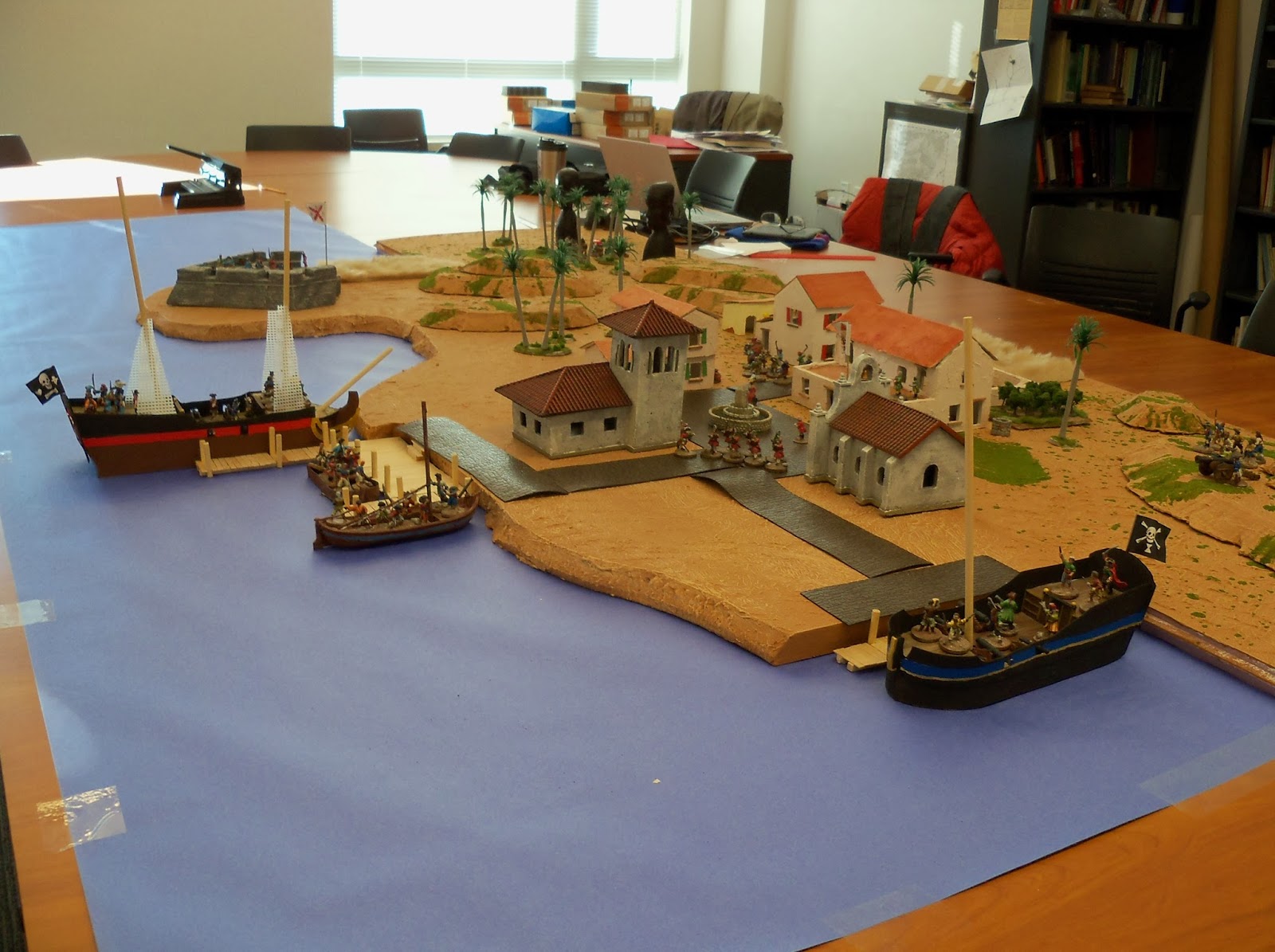 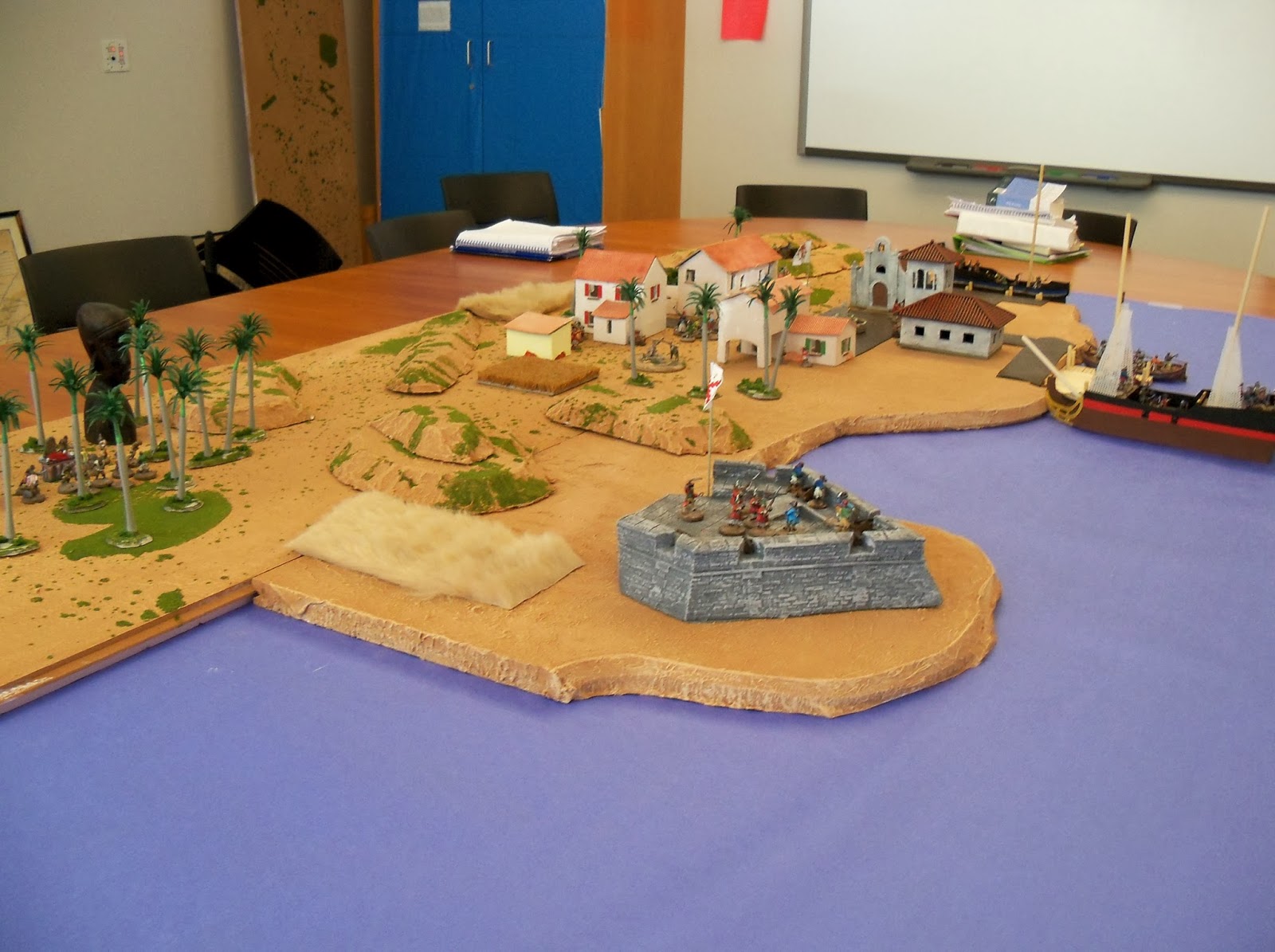 Until tomorrow!
Posted by Mad Doctor Mark at 11:45 AM No comments: